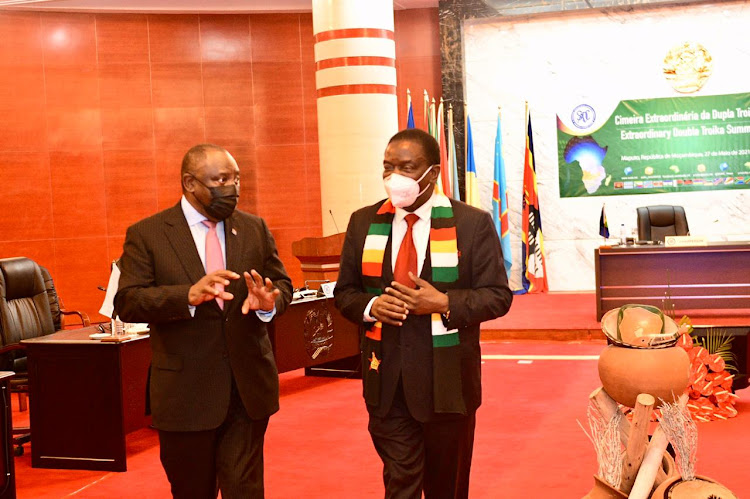 The South African Development Community (Sadc) has again postponed making a firm pronouncement on what interventions are needed to fight terrorism in Mozambique.

Instead, it agreed to convene an extraordinary summit in the country by June 20.

“[The] summit noted progress towards the establishment and operationalisation of the Sadc humanitarian and emergency operations centre (SHOC), which will enhance regional capabilities in risk and disaster management,” it said in a statement released on Thursday evening.

President Cyril Ramaphosa led a delegation — accompanied by minister of international relations and co-operation Naledi Pandor, minister of defence and military veterans Nosiviwe Mapisa-Nqakula, and minister of state security Ayanda Dlodlo — for the extraordinary double Troika Summit of heads of state and government of Sadc.

The summit, chaired by Mozambique’s president Filipe Nyusi, discussed measures to address terrorism in the country after continued terrorist attacks in the Cabo Delgado province, in the north of the country.

Sadc has postponed an Extraordinary Troika Summit on Mozambique due to the unavailability of heads of states.
Politics
1 year ago

In March, Mozambique was besieged by insurgents allegedly linked to Islamic State who overran the gas fields town of Palma, killing dozens of people and displacing many others.

During their last meeting on April 8, heads of states directed that an immediate “fact finding mission” assess and investigate the situation on the ground before responding to the situation.

The summit said it had received a report on the security situation in Cabo Delgado and reaffirmed its solidarity with the government and people of Mozambique and its continued efforts in addressing terrorism and ensuring lasting peace and security in the country, which is also a threat to the Sadc region.

“Summit noted the progress in finding a lasting solution to terrorism and acts of violent extremism in Cabo Delgado province, and considered the proposed regional response in support of the Republic of Mozambique.”

It commended the initiative made by Mozambique to organise a business forum on the margins of the summit and invited member states to participate.

The summit also “expressed sympathy and solidarity with the government and people of the Democratic Republic of the Congo after the Nyiragongo volcanic eruption in Goma, which caused the destruction of property, loss of life and displacement of people”.

Botswana’s president will miss a southern African regional meeting he was due to chair on Thursday to discuss recent attacks on Mozambique after a ...
News
1 year ago

“We saw the proposal that has been placed on the table and we saw that this was an opportunity for the Sadc leaders to rubber stamp what the ministers had decided at their last meeting.

“Remember Ramaphosa had to go to the Zondo commission but the ministers did meet and they did make a proposal for the 3,000 troops to be sent to be sent to Mozambique, so our impression was that they would make an announcement.”

Louw-Vaudran said Sadc was not particularly pleased with Nyusi’s decision to approach Rwanda, France and other European countries for assistance when they too have made recommendations.

“We thought this would be an opportunity for Sadc to tell him that they have a plan to stop this insurgence, but apparently not,” she said, adding that understandably, “these things take long.”

Louw-Vaundran said perhaps Sadc was in the process of planning the intervention and they were not yet in a position to make an announcement.

“You know it's terrorism, it’s a sensitive matter,” she said.

The cancellation of a South African company's contract to provide combat helicopter support to Mozambican security forces has created a critical ...
News
1 year ago

Botswana President Mokgweetsi Masisi has been on a charm offensive, trying to lobby powerful nations in the SADC region to support the country's ...
Politics
1 year ago