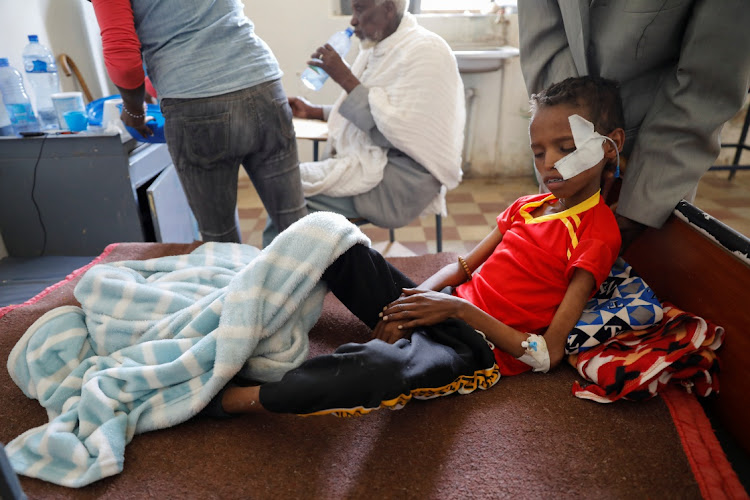 Fourteen-year-old Adan Muez is helped to sit up in his bed at Adigrat General Hospital in the town of Adigrat, Tigray region, Ethiopia. File photo
Image: REUTERS/Baz Ratner

More than 350,000 people in Ethiopia's Tigray are suffering famine conditions, with millions more at risk, according to an analysis by United Nations agencies and aid groups that blamed conflict for the worst catastrophic food crisis in a decade.

“There is famine now in Tigray,” UN aid chief Mark Lowcock said on Thursday after the release of the Integrated Food Security Phase Classification (IPC) analysis, which the IPC noted has not been endorsed by the Ethiopian government.

“The number of people in famine conditions ... is higher than anywhere in the world, at any moment since a quarter million Somalis lost their lives in 2011,” Lowcock said.

Most of the 5.5 million people in Tigray need food aid. Fighting broke out in the region in November between government troops and the region's former ruling party, the Tigray People's Liberation Front (TPLF). Troops from neighbouring Eritrea also entered the conflict to support the Ethiopian government.

The violence has killed thousands of civilians and forced more than 2 million from their homes in the mountainous region.

The most extreme warning by the IPC — a scale used by UN agencies, regional bodies and aid groups to determine food insecurity — is phase 5, which starts with a catastrophe warning and rises to a declaration of famine in a region.

The IPC said more than 350,000 people in Tigray are in phase 5 catastrophe. That means households are experiencing famine conditions, but less than 20% of the population is affected and deaths and malnutrition have not reached famine thresholds.

“This severe crisis results from the cascading effects of conflict, including population displacements, movement restrictions, limited humanitarian access, loss of harvest and livelihood assets, and dysfunctional or non-existent markets,” the IPC analysis found.

The Ethiopian government disputed the IPC analysis, saying food shortages are not severe and aid is being delivered.

Ethiopian Foreign Ministry spokesperson Dina Mufti told a news conference on Thursday that the government was providing food aid and help to farmers in Tigray.

The US and the European Union, in a joint statement, called for an immediate ceasefire, the withdrawal of Eritrean troops, and humanitarian access to Tigray. It warned that the crisis threatened to destabilise the broader Horn of Africa region.

'HAVE TO ACT NOW'

For famine to be declared, at least 20% of the population must be suffering extreme food shortages, with one in three children acutely malnourished and two people out of every 10,000 dying daily from starvation or from malnutrition and disease.

Famine has been declared twice in the past decade: in Somalia in 2011 and in parts of South Sudan in 2017.

“If the conflict further escalates or, for any other reason, humanitarian assistance is hampered, most areas of Tigray will be at risk of famine,” according to the IPC, which added that even if aid deliveries are stepped up, the situation is expected to worsen through September.

US Ambassador to the United Nations Linda Thomas-Greenfield said a humanitarian nightmare was unfolding.

“This is not the kind of disaster that can be reversed,” she told a US and EU event on Tigray on Thursday. Referring to a previous famine in Ethiopia that killed more than 1 million people, she said: “We cannot make the same mistake twice. We cannot let Ethiopia starve. We have to act now.”

World Food Programme Executive Director David Beasley said that to stop hunger from killing millions of people in Tigray, there needed to be a ceasefire, unimpeded aid access and more money to expand aid operations.

According to notes of a meeting of UN agencies on Monday, seen by Reuters, the IPC analysis could be worse as “they did not include those in Amhara-controlled areas” in western Tigray.

How ethnic killings exploded from an Ethiopian town

The screams of the dying gradually fell silent as the sky darkened. Around midnight, Berhane Gebrezigher, an ethnic Tigrayan, remembers lying in a ...
News
1 year ago

US warns of further action against Ethiopia, Eritrea over Tigray

A senior US State Department official warned on Thursday that Ethiopia and Eritrea should anticipate further actions from the United States if those ...
News
1 year ago

We seem to have gotten our knickers in an almighty knot over the unbecoming behaviour of some of our esteemed guests at the Pan-African Parliament ( ...
Opinion & Analysis
1 year ago

When Ethiopia's Prime Minister Abiy Ahmed took over in 2018 and freed dozens of jailed members of the media as part of a raft of political reforms, ...
News
1 year ago

President Joe Biden called on Wednesday for the withdrawal of Eritrean and Amhara forces from Ethiopia's Tigray region and said immediate ...
News
1 year ago

Eritrean and Ethiopian soldiers forcibly detained more than 500 young men and women from four camps for displaced people in the town of Shire in the ...
News
1 year ago

Ethiopia accused the United States on Monday of meddling in its affairs after Washington announced restrictions on economic and security assistance ...
News
1 year ago