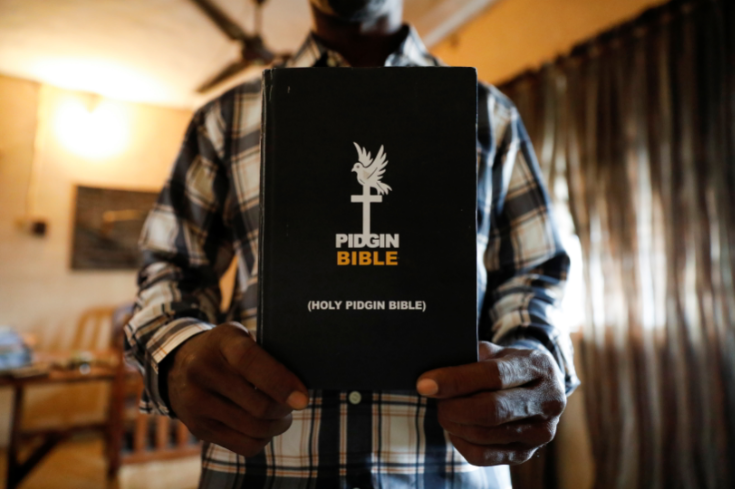 Salem Egoh, translator of the Bible into Nigerian Pidgin, poses for a photo with the Pidgin Bible at his home in Lekki, Lagos, Nigeria on June 25 2021.
Image: REUTERS/Temilade Adelaja

At the Heavenly Citizen's Church in Lagos, the pastor and congregation have adopted a new tool to help them understand Christian scripture: the first Bible translated into Nigerian pidgin.

Sometimes called pidgin English, the language is widely used and understood across regions and ethnic groups in the nation of 200 million people, although most books and newspapers on sale in Nigeria are in English.

"Most people here, they are not properly schooled, you know, and so we do more pidgin English here," said pastor Ben Akpevwe, who has been using the Pidgin Bible during services at his church in the down-at-heel Ejigbo neighbourhood in Lagos.

"Each time I am reading it in church they are always very excited because it is like identifying with the language of the people."

The Pidgin Bible is the result of three years of solitary labour by amateur translator Salem Egoh. He wanted to improve the understanding of the Bible in the fervently religious country, where English is the official language, but not the mother tongue for millions of people.

He said the job had required creativity because many words found in English versions of the Bible had no exact equivalent in pidgin.

"For example the word 'chariot' has no word in pidgin, we had to invent a word called 'horse motor' to represent chariot," said Egoh, who included a glossary of 1,000 words at the end of his translation.

So far, the Pidgin Bible consists of the New Testament, the Book of Psalms and the Book of Proverbs. Egoh is working on a translation of the rest of the Old Testament, and hopes to release a complete Bible by the end of the year.

Working his way through a passage from the Book of Chronicles, he typed: "David plus all di pipo of Israel march go Jerusalem (wey be Jebus)." This was translated from: "And David and all Israel went to Jerusalem, that is, Jebus."

In the meantime, at the Heavenly Citizen's Church, worshipper Elizabeth Eromosele is already making good use of the Pidgin Bible, which is on sale across Nigeria and has been adopted by a number of places of worship.

"When it comes to English language you have to really crack your brain," she said.

"But when it comes to Pidgin Bible you will read it as if you are interacting, you are talking freely. You are just reading it with comfort, you are not stressing yourself."

TB Joshua, the popular Nigerian charismatic preacher and televangelist, who has died at the age of 57, left a conflicting legacy.
News
4 months ago