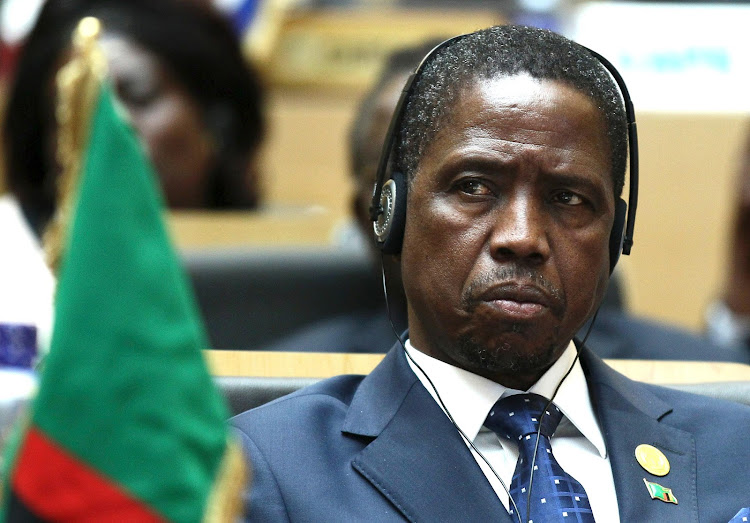 Zambia's President Edgar Lungu will seek to fend off a perennial opposition challenger in a vote on Thursday that may be decided by frustrated young voters amid economic turmoil and a pending bailout for one of Africa's most indebted nations.

Investors are closely watching the Aug. 12 vote in the major copper producer which had the continent's first pandemic-era sovereign default in November.

International Monetary Fund (IMF) support, already broadly agreed, is on hold until after the vote. So too is debt restructuring seen as an early test of a new global plan to ease poor countries' burden.

In power since 2015, 64-year-old Lungu faces a potentially tight contest against Hakainde Hichilema - known as "HH" - a businessman who has criticised the incumbent's economic management.

"Investors may see a potentially clearer path to an IMF programme and a debt restructuring under HH," said Libralato, whose firm holds Zambia's defaulted bonds.

Zambia owes in excess of $12 billion to external creditors and spends 30%-40% of its revenues just meeting the interest payments on its debt, credit rating firm S&P Global estimates. Its debt-to-GDP ratio was near 120% last year, one of the highest in emerging markets and probably double the level considered to be manageable.

Zambia said in May it had reached a broad agreement with the IMF on macroeconomic and fiscal targets and policy issues during talks to secure lending, setting the stage for what investors hope will be a post-election deal.

Zambia's Constitutional Court ruled on Friday that President Edgar Lungu can stand for re-election in August, throwing out a second opposition ...
News
1 year ago

Zambia's electoral commission in May announced a ban on campaign rallies to curb the spread of Covid-19. But both the PF and Hichilema's United Party for National Development have held gatherings on the pretext of distributing face masks.

Lungu is campaigning on infrastructure investments and increased state control of mining.

Copper mining, which generates around 70% of Zambia's export revenues, has been highly politicised in the run-up to the election.

Zambia's state mining investment arm ZCCM-IH agreed in January to take on $1.5 billion in debt in exchange for full control of Mopani Copper Mines, which previous majority owner Glencore had planned to shutter.

Lungu framed the deal as a boon for workers.

Hichilema, however, criticised it, saying it added to Zambia's debt load.

Hichilema, 59, casts himself as a self-made man in campaign videos, saying he walked to school barefoot as a child and attended university on a government bursary. He was CEO of an accountancy firm before entering politics.

He has contested and lost five presidential elections, but only narrowly lost to Lungu in 2016's disputed vote. He was charged with treason and briefly jailed the following year.

With polls seen as unreliable, analysts say this election is too close to call. Political violence has escalated ahead of the vote, including two ruling party supporters hacked to death with machetes, leading Lungu to deploy the military.

Some 54% of registered voters are 34 or younger, statistics from the Electoral Commission of Zambia (ECZ) show.

That could help Hichilema, who has placed the economy front and centre of his campaign, said Euston Chiputa, history professor at the University of Zambia.

"Hichilema has gained ground among the youth because there are frustrations regarding employment," he said.

Unemployment hit a 10-year high in 2020, according to International Labour Organisation estimates, and the local kwacha currency's nearly 40% depreciation since January 2020 has made life more expensive for Zambia's roughly 18 million people.

The roads, schools, and hospitals built by Lungu's government and paid for by debt - notably Chinese loans and eurobonds - have not yet delivered promised growth.

The IMF expects the economy to be among the weakest in Africa this year, with GDP set to grow just 0.6% after a 3.5% contraction last year.

A win for Hichilema, seen as a market-friendly candidate, could trigger a relief rally for Zambian assets, said Kevin Daly at Aberdeen Standard Investments, a member of the Zambia External Bondholder Committee, which represents holders of Zambia's eurobonds.

Zambian government bonds have already gained more than 30% since November as investors look to an IMF deal.

Zambia is also set to be the biggest beneficiary of the IMF's new $650bln allocation of Special Drawing Rights, which will boost its foreign reserves.