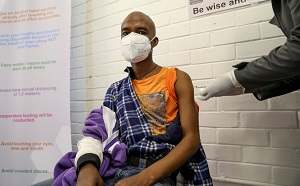 Nigeria is also expecting deliveries over coming months of tens of millions of doses of the Johnson & Johnson vaccine which it has purchased through an African Union programme.
Image: REUTERS/Siphiwe Sibeko/File Photo

Nigeria is prioritising the AstraZeneca, Pfizer, Moderna and Johnson & Johnson vaccines, the official heading Nigeria's Covid-19 vaccination campaign said on Tuesday when asked whether the Sinopharm shot would be used in the country.

Dr. Faisal Shuaib, head of Nigeria's primary healthcare agency, said the Sinopharm vaccine had been approved by the national medicines regulator "for emergency use", but rolling it out was not a priority.

"We don't want a situation where we may have 10, 20 vaccines that have been globally recognised or listed for emergency use, and then you want to take all 20 vaccines to Nigeria, it doesn't make any sense," he told reporters at a regular COVID briefing.

"We're prioritising those ones that we're already familiar with," he said, adding that whether vaccines other than the four he had named were used in Nigeria at a later stage would depend on availability and on "how this pandemic shapes up".

At a briefing a week earlier, Shuaib had said Nigeria was expecting to take delivery of 7.7 million doses of the Sinopharm vaccine through the COVAX scheme aimed at providing vaccines to developing countries. However, he had not made clear whether the Sinopharm doses would be administered or not.

The main constraints are a lack of supply and high levels of vaccine hesitancy among parts of the population.

Shuaib said Nigeria had taken delivery last week of close to 600,000 doses of the AstraZeneca vaccine supplied by Britain through the COVAX scheme, the latest out of a series of donations from developed countries.

Nigeria is also expecting deliveries over coming months of tens of millions of doses of the Johnson & Johnson vaccine which it has purchased through an African Union programme.

WHO begins shipping Chinese vaccines despite some misgivings

The World Health Organisation's pandemic programme plans to ship 100 million doses of the Sinovac and Sinopharm Covid-19 shots by the end of next ...
News
3 months ago

Nigeria is adding SA to its “red list” of countries for which there are stringent restrictions for arriving passengers, officials said during a ...
News
5 months ago

Nigeria will restart Covid-19 inoculations on August 16 after taking delivery of 4-million doses of Moderna vaccine, with shipments of Johnson & ...
News
3 months ago