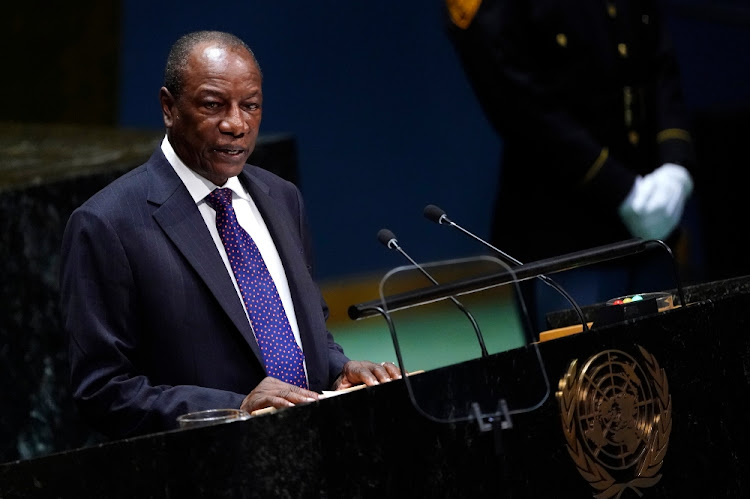 Last year, Conde pushed through a constitutional change to allow himself to run for a third term, a move his opponents said was illegal.
Image: REUTERS/Carlo Allegri

West African leaders met on Wednesday for emergency talks on Sunday's military coup in Guinea that ousted President Alpha Conde amid growing criticism of the regional response to a series of setbacks to democracy.

called the coup "unfortunate and regrettable" in brief introductory remarks to the virtual summit.

The leaders will discuss "our response to this clear violation of our common charter of good governance in the ECOWAS region and what decision we want to take in response", he said.

Conde's ouster is the latest in a flurry of setbacks to democracy in West Africa, which until recently looked to have shed its "coup-belt" moniker.

ECOWAS on Sunday demanded a return to the constitutional order in Guinea and threatened to impose sanctions. However, some experts say its leverage could be limited, in part because Guinea is not a member of the West African currency union.

Last year, Conde pushed through a constitutional change to allow himself to run for a third term, a move his opponents said was illegal. Ivory Coast President Alassane Ouattara also won a third term last year after changing his country's constitution.

ECOWAS remained silent about Conde and Ouattara's third-term bids, which activists say has contributed to West Africans' loss of faith in democracy and opened the door for military officers to seize power.

Elsewhere in the region, Mali's military staged coups in August 2020 and then again in May this year.

ECOWAS condemned the coups and temporarily imposed sanctions. It said on Tuesday it was concerned that Mali's transitional government had not made sufficient progress toward organising elections next February as promised.

But many pro-democracy advocates have criticised the ECOWAS response as too passive.

The leaders of a military coup in Guinea promised on Monday to set up a transitional government of national unity after ousting President Alpha Conde ...
News
11 months ago

Guinea's coup leader, Mamady Doumbouya, a former French legionnaire, has pledged to install a unified, transitional government but has not said when or how that will happen.

In an apparent gesture to Conde's civilian opponents, at least 80 political prisoners detained by the president were released on Tuesday evening, many of whom had campaigned against his constitutional change.

Doumbouya also met the heads of Guinea's various military branches for the first time on Tuesday, hoping to unify the country's armed forces under the junta's command.

Guinea's main opposition leader, Cellou Dalein Diallo, who finished runner-up to Conde in three successive elections, told Reuters on Tuesday he would be open to participating in a transition back to constitutional governance.

In a statement on Tuesday evening, Conde's party said it "noted the advent of new authorities at the head of the country" and called for the president's swift and unconditional release.

Since the putsch, life in the streets of Conakry appears to have returned to normal, with some military checkpoints removed.

Fears that the power struggle could hinder Guinea's production of bauxite, a mineral used to make aluminium, have begun to ease. The country's largest foreign operators continued to operate without disruption on Tuesday.

Aluminium hit a fresh 10-year high on Monday after news broke of unrest in Guinea, which holds the world's largest bauxite reserves. Doumbouya has pledged that mining will continue unhindered.

Guinean army topples the divisive ‘Mandela’ who clung to power

The 2010 election of Conde was greeted with optimism, but he turned out to be the very thing he supposedly opposed
World
11 months ago

Toppled Conde failed to live up to pledges in Guinea

The apparent overthrow of President Alpha Conde in Guinea capped a steady slide from grace for the veteran opposition leader and human rights ...
News
11 months ago

Soldiers who staged an uprising in Guinea's capital on Sunday said in a short broadcast on state television that they have dissolved the constitution ...
News
11 months ago