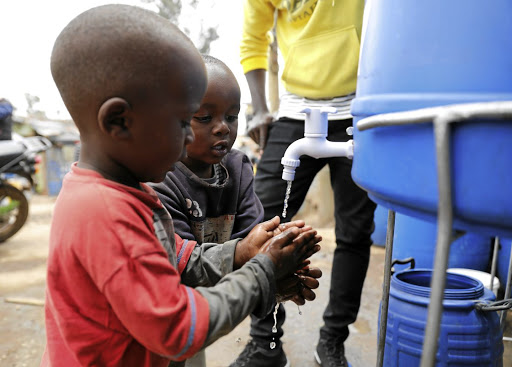 Muthoni said filling a 20-litre (5-gallon) jerry can cost as much as 50 Kenyan shillings ($0.45) - a potentially crippling amount in a city where the majority of slum dwellers earn less than $1.90 a day, according to the World Bank.
Image: Reuters/ File photo

In the 30 years that Josephine Muthoni has lived in Nairobi's Mukuru slum, she has never had a steady supply of clean water.

The only way to get water was from vendors dotted around the slum, who charge exorbitant prices for the often polluted water they buy from government water points or steal straight from the municipal pipes, the 62-year-old mother of nine explained.

Muthoni said filling a 20-litre (5-gallon) jerry can cost as much as 50 Kenyan shillings ($0.45) - a potentially crippling amount in a city where the majority of slum dwellers earn less than $1.90 a day, according to the World Bank.

“We would sometimes walk five kilometres to get water. I thought that was how life should be until I worked for a family and saw water flowing full time from their taps,” the retired housekeeper told the Thomson Reuters Foundation.

The more than 600,000 residents living in one of Nairobi's largest slums have struggled with water access for years, a problem worsened by frequent bouts of citywide water rationing, which has been ongoing since 2017.

But soon, Mukuru residents will be able to fill a jerry can with clean water for as little as 50 Kenyan cents, using token-operated vending machines that the city government is installing in an effort to ease the slum's water stress.

With the new system, residents will receive plastic tokens - similar to key fobs - that they can charge using the M-Pesa mobile money platform.

They then insert the tokens into a machine at one of the 10 water stations being set up around Mukuru and select how much water they want dispensed.

Kagiri Gicheha, an engineer at the Nairobi City Water and Sewerage Company (NCWSC), which is helping develop the system, said the project is in the final stages, only awaiting the installation of the vending machines.

The dispensers, each costing 200,000 shillings, mean Mukuru residents will no longer be at the mercy of the slum's informal, exploitive water market, Gicheha said.

“This is a way of controlling the cartels that have long been stealing water in the slums because this is an automated system that is very easy to manage,” he said.

Until the system is operational, residents can fetch clean water for free from boreholes that have been dug for the project, each of which will feed up to four water dispensers.

Since starting the project in April 2020, the city government has drilled nearly 200 boreholes across five Nairobi slums and hopes to expand to more areas depending on funding and demand, Gicheha said.

Officials decided to launch the system in Mukuru after seeing the success of a similar programme run by the local non-profit Shining Hope for Communities (SHOFCO) in Kibera, Nairobi's largest slum.

Currently, there are 23 machines dispensing water to Kibera residents, who pay two shillings to fill a jerry can, said Johnstone Mutua, a programme officer at the grass roots group.

“The project is very efficient. Most residents now know how to use the system and we installed solar-powered lights for security at night,” said Mutua.

“This means someone can get water any time they want.”

Maureen Adhiambo, a 28-year-old mother of three in Kibera, says the vending machines cost half of what she used to pay water vendors and finally offer her a reliable source of water.

"(Before), the queues were too long and water would come only once a week,” she said.

Mutua said the first attempt at setting up a water vending system was in Mathare slum in 2015.

But the machines were being fed from large tankers, not boreholes, he said, which meant during drought there was no water to fill them with - so now the machines in Mathare stand empty.

Fuelled by explosive population growth, demand for water in Kenya's capital has shot up over the past decade, but broken municipal water pipes and frequent drought leave the city chronically thirsty.

While residents need more than 810,000 cubic metres daily, the city's dilapidated water infrastructure can only supply 526,000 cubic metres, according to figures from the NCWSC.

Across Kenya, the water crisis hits hardest in slums, where nearly half the urban population lives, according to the World Bank, and where homes are not connected to the water grid.

Before the vending machine project came to Mukuru, Gideon Musyoka, an elder of one of the villages inside the slum, said the taps at the government water points rarely flowed and when they did the water was often tainted by raw sewage.

For women, the search for water was time-consuming, expensive and dangerous, exposing them to sexual assault or rape. “Women were almost getting used to being raped, even in broad daylight, as they went to water points to fetch water,” said Muthoni, the Mukuru resident.

Jamlick Mutie, an independent water and sanitation expert working in Nairobi's slums, applauds the water dispensers as a safe, affordable and efficient solution.

Mutie noted that at the subsidised cost of 25 shillings per cubic metre, Mukuru residents will be able to buy water for less than half what other Nairobi residents pay to get it piped into their homes.

Efforts to get clean water to the slums are especially urgent during the coronavirus pandemic, with health experts pointing to handwashing as one of the best ways to curb the spread of Covid-19, he said.

“For the slum residents, it would be a disaster without water,” he said.

The price of the water is enough to cover the costs of maintenance and electricity to run the machines, making the project sustainable, he added.

The biggest challenge, Mutie warned, is protecting the machines from the cartels who see the project as a threat to their business.

Mutua at SHOFCO said Kibera residents are tackling that problem by having volunteers guard the water stations.

To discourage tampering with the vending machine pipes, the charity built an aerial water network, suspending the pipes overhead rather than burying them underground, and is encouraging the government to do the same in Mukuru, he said.

As the people in Mukuru wait for their water vending machines to arrive, Musyoka, the village elder, said having abundant, clean water is something many of them never could have imagined.

“Seeing so much water in Mukuru slums is what we call magic. Now, we can say that people are clean and healthy,” he said.