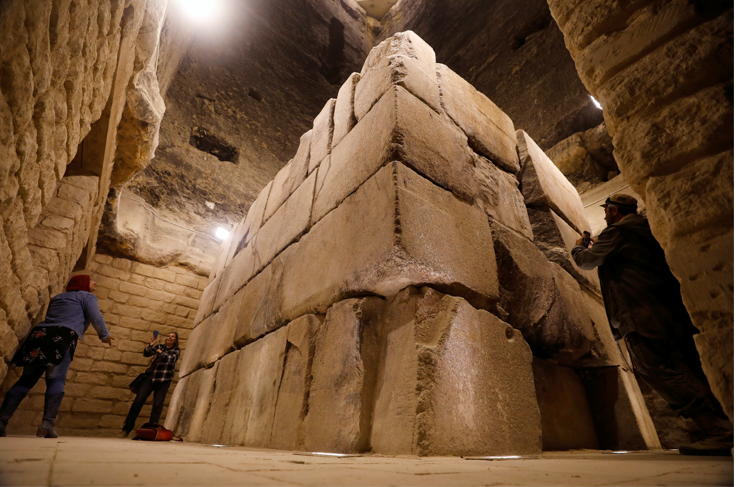 Tourists take pictures at the burial chamber and sarcophagus of King Djoser inside the standing step pyramid of Saqqara, south of Cairo, Egypt on March 5, 2020.
Image: REUTERS/Mohamed Abd El Ghany

Egypt on Tuesday reopened to tourists the 4,700-year-old southern tomb of King Djoser at the pyramid of Saqqara after a 15-year renovation.

The tomb, south of Cairo, lies near the Third Dynasty pharoah's famous Step Pyramid, Egypt's earliest large-scale stone structure, which itself was closed for restoration until March 2020.

The southern tomb, built between 2667 BC and 2648 BC, is thought to have been built for symbolic reasons, or perhaps to hold Djoser's internal organs, said Mostafa Waziri, secretary-general of Egypt's Supreme Council of Antiquities.

Egypt is keen to reinvigorate tourism following the coronavirus pandemic and has unveiled a series of new discoveries and a new museum in recent months.

Egyptologists uncover rare tombs from before the Pharaohs

Egyptian archaeologists working on the Nile Delta have uncovered dozens of rare predynastic tombs dating to the period before Egypt's Pharaonic ...
News
4 months ago