Trickery will not stand in our way, says Zim opposition party with 'a big idea' 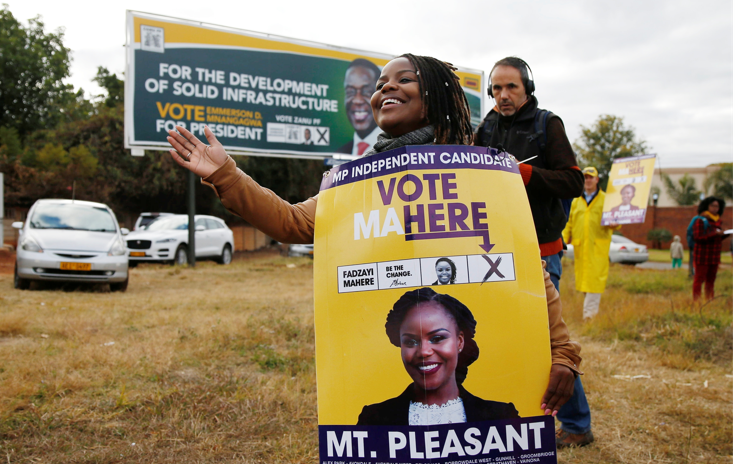 MDC Alliance spokesperson, Fadzayi Mahere said they were working on a “big idea” that seeks to “create a platform around which citizens all over Zimbabwe will converge for change”.
Image: REUTERS/Philimon Bulawayo

The youth will show you who's boss in Zimbabwe come the 2023 general elections.

This is the gist of MDC Alliance spokesperson Fadzayi Mahere’s reaction to Zanu-PF’s tactic of blocking Nelson Chamisa from rebranding the biggest opposition in Zimbabwe.

“No attempt to hijack the people’s big idea whose time has come will succeed. Young people are registering to vote en masse to take us to our 6-million voter target,” said Mahere in a statement.

The MDC Alliance has been criticised for being docile as Zanu-PF launches an onslaught on the party. But Mahere said they were working on a “big idea” that seeks to “create a platform around which citizens all over Zimbabwe will converge for change”.

The alliance is being frustrated through seemingly proxy opposition political parties friendly to Zanu-PF, most of which are members of the Political Actors Dialogue, who are enjoying favours such as cars and diplomatic passports from the government.

“We have witnessed an unprecedented attempt to decapacitate the main opposition by Zanu-PF and its proxies. We expect more; the use of puppet political parties, the violation of democratic freedoms and the abuse of the legal system. Yet we remain unshaken,” Mahere added.

Last month, the leader of the MDC T, Douglas Mwonzora, announced that he would contest polls as MDC Alliance, the name that was used by Chamisa at the disputed July 2018 plebiscite.

Mwonzora declared this after he also pocketed the Z$60m (about R6.17m) share of the funds made available by the Political Party Funding Act and  given to parties in proportion to votes secured in the latest general election, provided they got at least 5% of the vote.

Mwonzora is the leader of the MDC T, which had Thokozani Khupe as its presidential candidate, and who accounted for 0.09% of the votes in the last vote.

Without money and pondering over a name, the MDC Alliance is working round the clock to come up with ways to deal with what it calls Zanu-PF’s “zero sum politics.”

One of the likely names mooted for the party was Citizens Convergence for Change (CCC) which for some time the party had been code-switching with its slogan “Chamisa Chete Chete” a ChiShona phrase that loosely means “Chamisa only.”

But on Monday, the MDC Alliance woke up to understand that an unknown politician, Varaidzo Musungo, had notified the Zimbabwe Electoral Commission of the existence of her political party under the name Citizens Convergence for Change.

The MDC Alliance doesn’t take this lightly. Mahere vowed that no amount of trickery would stand in the way.

“At the appropriate time, we will unveil the new name. And there will be no confusion for people to know who their leaders are,” she said in a statement.

Zanu-PF’s traditional strongholds are in the country’s rural areas from where an estimated 10-million or 67% of the population reside, as of 2020 according to World Bank economic indicators. However, the MDC Alliance said its broad-based approach was making inroads into rural areas.

'No amount is too big or too small': Zim opposition starts crowdfunding

Zimbabwe's opposition MDC Alliance, led by Nelson Chamisa, has reached out for financial aid from the public, both local and the diaspora.
News
11 months ago