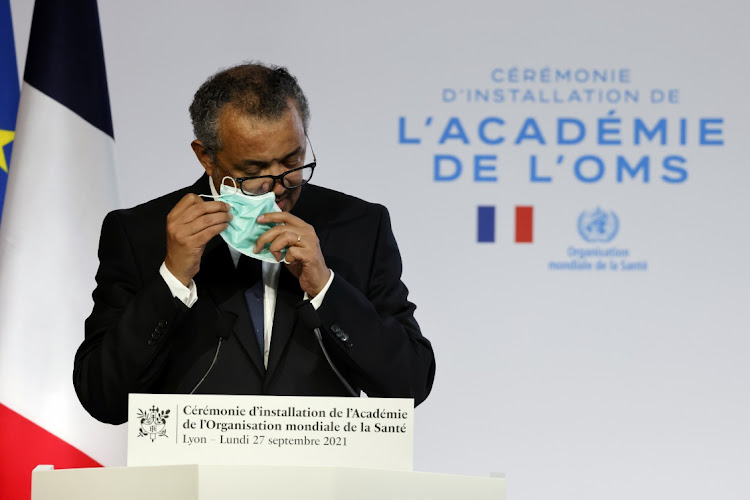 The countries voiced support for the WHO’s "immediate action to terminate the contracts of presumed perpetrators still in their employment" and for requiring others take administrative leave pending further investigations.
Image: Ludovic Marin/Pool via REUTERS

The head of the World Health Organisation came under US-led pressure from donors on Friday to act quickly on a damning report on a sexual assault scandal that has engulfed it and other aid agencies in the Democratic Republic of Congo.

More than 80 aid workers, a quarter of whom were employed by the WHO, were involved in sexual abuse and exploitation during an Ebola epidemic in eastern Congo, an independent commission said on Tuesday.

The probe, launched by WHO chief Tedros Adhanom Ghebreyesus, was prompted by an investigation last year by the Thomson Reuters Foundation and The New Humanitarian in which more than 50 women accused aid workers from the WHO and other agencies of demanding sex in exchange for jobs between 2018-2020.

The report - delayed by a month due to fresh allegations and a widening investigation - was issued a week after the period for nominating the next WHO director-general closed.

The donors urged swift action in a joint statement.

"We expect full commitment from the WHO to prevent and address such acts, including through fundamental reforms to the WHO," the US mission to the United Nations in Geneva said on behalf of Australia, Britain, Canada, New Zealand, Norway and the European Union and its member states.

The countries voiced support for the WHO’s "immediate action to terminate the contracts of presumed perpetrators still in their employment" and for requiring others take administrative leave pending further investigations.

"... we urge the WHO to initiate an immediate, thorough, and detailed assessment of the institutional policies, operational processes, leadership culture, and circumstances at WHO that allowed this to happen including for cases to go unreported to WHO’s leadership and member states," the joint statement added.

France had already urged Tedros to make good on his commitment to submit an action plan addressing the inquiry's recommendations within 10 days.

The donors fund WHO's operations worldwide, from fighting the Covid-19 pandemic to routine programmes against chronic diseases such as diabetes and malnutrition.

Tedros, who visited Congo 14 times during the Ebola epidemic, told a news conference on Tuesday that no one had raised the allegations. He again pledged "zero tolerance" for sexual exploitation and apologised to the victims but declined to say whether he was considering resigning.

He has gained wide support for a second five-year term, formally nominated by 17 EU members including major donors Germany and France and backed by countries in other regions, diplomats told Reuters on September23 as the deadline passed. The United States also backs him, they said.

His native Ethiopia has not supported his re-election bid, due to friction over the Tigray conflict. He is still expected to be re-elected in the wake of the scandal, diplomats said.

Under WHO rules, the envelopes are to remain sealed until after October 29, meaning it is possible that a country might have nominated another candidate for the election in May.

Western diplomats have voiced concern at the WHO "management failure" during the sexual violence in Congo. Middle managers were criticised but the top echelon including Tedros has emerged without being accused or directly linked, they added.

"The report is so bad. But it seems to clear him and senior management even by name," a Western diplomat told Reuters. "Tedros really has to do his part and show leadership and take action as soon as possible."

Another Western diplomat said: "It makes for sobering reading, like a throwback to another era." She added: "I have no reason to doubt Tedros is committed to dealing with it."

A senior official in Kenya dismissed the notion that his government would withdraw its support for Tedros’ re-nomination.

“Really? Isn’t that a little silly?” Macharia Kamau, principal secretary in Kenya’s foreign ministry, said in a text message when asked if Kenya’s stance on Tedros had changed.

Okello Oryem, Uganda's state minister for foreign affairs, told Reuters that "Tedros is an African candidate" and that Uganda would not withdraw support.

"The NGOs making these allegations are from Western countries. Some of whom may not want Tedros to be there. It might be a plot by some Western countries to deny Africa this position," he said.

"Tedros can not be held accountable for something that happened thousands of miles away in Congo."

More than 80 aid workers including some employed by the World Health Organisation (WHO) were involved in sexual abuse and exploitation during an ...
News
2 months ago

The commission found that at least 21 of 83 suspected perpetrators were employed by the WHO, and that the abuses, which included nine allegations of rape, were committed by both national and international staff.

A spokesman for the U.N. Children's Fund (UNICEF) said that it was seeking information on aid workers from agencies other than WHO involved in the abuse, but declined to specify whether its own staff were implicated.

"We remain steadfast in our commitment to end sexual exploitation and abuse in the aid sector, to provide victims with assistance, and to hold perpetrators accountable," he said.

Congo's health minister, Jean-Jacques Mbungani Mbanda, said it was now for authorities to "hold account all the presumed authors of these reprehensible acts".

A former senior UN official who worked in Congo during the Ebola crisis said: "They should be fired, stripped of their UN immunity and handed over to the national prosecution authorities. They've committed crimes in that country and are subject to punishments of that country."

Most UN personnel enjoy functional immunity, which means they cannot be taken to court for anything they have done as part of their work. But the secretary-general has the power to waive that immunity if it "would impede the course of justice".

Activists said that sexual abuse and harassment were common in Congo and called for reforms. There have been many incidents of alleged sexual abuse by UN peacekeepers in several missions in Africa in the past decade.

"... WHO and other UN institutions should now implement the report’s recommendations and take any step necessary to prevent such abuses from happening again, in DRC or elsewhere," said Jean-Mobert Senga, Congo researcher at Amnesty International.

More than 80 aid workers including some employed by the World Health Organisation (WHO) were involved in sexual abuse and exploitation during an ...
News
2 months ago