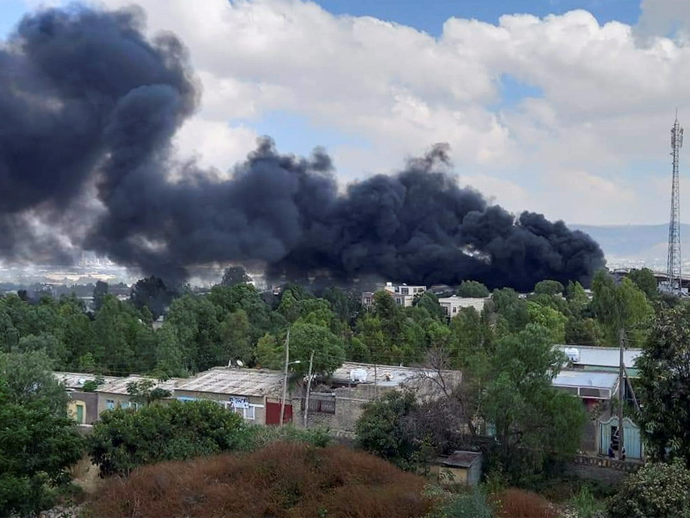 But its soldiers swept back from the surrounding mountains and now control most of Tigray and parts of two neighbouring regions - Afar and Amhara - where fighting has also intensified.
Image: REUTERS/Stringer NO RESALES. NO ARCHIVES.

An Ethiopian government jet bombed the capital of northern Tigray region on Thursday, with one doctor reporting 10 deaths in the latest casualties of a year-long war.

Prime Minister Abiy Ahmed's federal forces have hit Mekelle from the skies at least eight times in the last two weeks, residents say, in a fight against local Tigrayan forces that has killed thousands and uprooted more than 2-million people.

Foreign powers are pressing for mediation and the United States is threatening sanctions to stem a conflict reverberating across the already volatile and impoverished Horn of Africa.

Hayelom Kebede, a doctor at Mekelle's Ayder Referral Hospital, told Reuters that so far 10 people have died as a result of the strike and 21 were injured. He predicted the death toll would rise because medical care is severely constrained.

Another doctor told Reuters he saw six people pulled out of rubble in Kebele 5 but he could not tell if they were alive or dead.

Ethiopia carried out an air strike on the city of Mekelle for the third day this week, a government spokesperson said, in a campaign to weaken ...
News
9 months ago

A resident of the city who visited the site said he saw a five-year-old transported alive from the rubble to hospital.

Asked about reported civilian deaths, government spokesperson Legesse Tulu replied in a text message: "There is not any intended and deliberate harm on civilians and their properties. The air strike successfully hit its target."

With communications mainly down in Tigray, it was impossible to independently verify events.

The TPLF, which says it is fighting discrimination by central government, was forced out of Mekelle at the end of last year, accused of rebellion and attacking an army base.

But its soldiers swept back from the surrounding mountains and now control most of Tigray and parts of two neighbouring regions - Afar and Amhara - where fighting has also intensified.

The government says it is targeting sites where the TPLF is training, storing equipment, or otherwise using facilities for its war effort.

An Ethiopian government air strike on the capital of the northern Tigray region on Friday forced a U.N. aid flight to abort a landing there, the ...
News
9 months ago

The Ethiopian government carried out a second air strike within hours on the Tigray region on Wednesday, significantly escalating a campaign to ...
News
9 months ago

Rebellious Tigrayan forces accused the Ethiopian government of launching air strikes on the capital of Tigray region on Monday, and though a ...
News
10 months ago