Sudanese activists call for escalation after deadliest day since coup 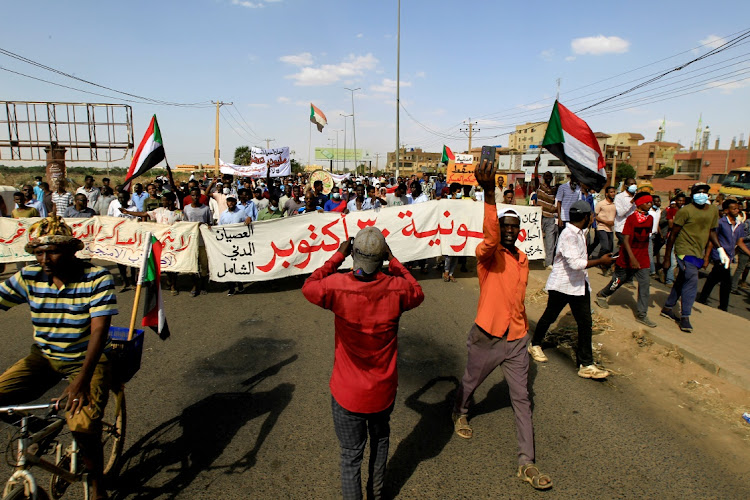 Opponents of the coup in Sudan vowed on Thursday to step up protests after 15 civilians were reported killed in the deadliest day yet since last month's takeover, risking more confrontation as the junta shows no sign of backing down.

More than three weeks since General Abdel Fattah al-Burhan derailed Sudan's transition towards civilian rule, pro-democracy activists are facing an increasingly dangerous struggle in the streets. The deaths on Wednesday, tallied by medics aligned with the protest movement, bring the toll since the October 25 coup to at least 39.

The latest violence drew condemnation from Western states which have suspended economic assistance since the coup. Despite the economic pressure - Sudan desperately needs aid - efforts to mediate a way out of the crisis have stalled.

A senior U.S. State Department official said it was "a really critical moment," expressing a "somewhat positive" feeling about recent talks held by Assistant Secretary of State Molly Phee in Khartoum, "which I know, seems counterintuitive."

Protesters described police behaviour during Wednesday's protests as more aggressive than before, the latest sign that the military is looking to entrench its position. The military has said peaceful protests are allowed.

Confrontations continued on Thursday in Khartoum's twin city Bahri, which had seen the worst of Wednesday's violence. A witness said security forces fired tear gas and live bullets as they removed barricades erected by protesters, who were dispersing and regrouping as they tried to protect them.

A witness in Omdurman, across the Nile, said forces were removing barricades, using tear gas and arresting protesters.

A group of neighbourhood resistance committees coordinating the protest movement in east Khartoum announced in a statement "open escalation" against the coup.

"Now we are making consultations among the resistance committees about upping the escalation against the coup," a senior member of the committees said, speaking on condition of anonymity.

The United Nations condemned the repeated use of excessive force against peaceful demonstrators, calling on the de facto authorities and security forces to exercise restraint, refrain from further rights violations, and release all those detained since the coup, UN spokesman Stephane Dujarric said.

Security forces shot dead at least 15 people and wounded dozens as thousands of Sudanese took to the streets on Wednesday on the deadliest day in a ...
News
2 weeks ago

Pictures of people killed in earlier demonstrations were held aloft during Wednesday's protests.

"I don't think yesterday's violence will have done much if anything to tamp down how strident the street has been in pushing back against the coup," said Jonas Horner of Crisis Group.

"The military misunderstood just how determined people on the street are to see the return of a civilian-led government."

Police said 89 officers were wounded on Wednesday and that they recorded one civilian death.

"There is increasing despondency, but the resilience of the ongoing protest movement gives hope that the coup could still be reversed. There is still a window of opportunity to do that, but it is narrowing," said Ahmed Soliman of the Chatham House think tank.

Briefing reporters on a plane from Nairobi to Abuja during a visit to Africa by Secretary of State Antony Blinken, the senior U.S. State Department official struck an optimistic note on Sudan: "Everybody, it seems to me, wants to find a way back, which is not the feeling I think you would get from the outside."

But Burhan has yet to name a new cabinet, leaving at least some possibility for a compromise over a new administration, though analysts say it underlines difficulties the general has faced securing civilian backing for a new government.

European Union foreign policy chief Josep Borrell called for the restoration of ousted Prime Minister Abdalla Hamdok, who is under house arrest, and the release of other detained civilians.

"If the constitutional order is not immediately restored there will be serious consequences for our support, including financial," he said.

Security forces shot dead three people during nationwide protests in Sudan on Saturday, a doctors committee said, as hundreds of thousands of people ...
News
1 month ago