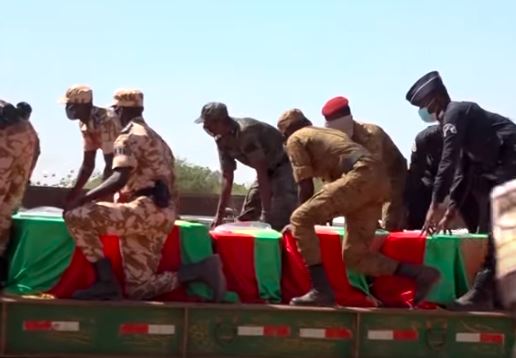 Burkina Faso buried many of the 49 gendarmes killed in a recent strike on a security outpost.
Image: Reuters

Burkina Faso on Tuesday buried many of the 49 gendarmes killed in a recent strike on a security outpost, even as the government reported the killing of around 20 more military police and civilians in a separate attack.

The escalating bloodshed has provoked protests and calls for President Roch Kabore to resign over the authorities' failure to curb a four-year Islamist insurgency that has killed thousands and forced more than a million people to flee their homes.

The November 14 attack near the northern Burkinabe town of Inata, which also killed four civilians in addition to the 49 gendarmes, was the worst loss suffered by state security forces in recent years.

Hundreds of mourners watched in silence as flatbed trucks delivered around 30 coffins, each wrapped in a Burkinabe flag, to a cemetery in the capital Ouagadougou for a mass funeral.

Reports that the gendarmes had run out of food before the attack, and had been forced to scavenge and hunt near the outpost, have stoked additional resentment.

“Our brothers alerted us the last time on Saturday night: 'we don't have food,' they were saying,” relative Okiri Mien told reporters angrily at the cemetery.

He and others also objected to the manner of the burials, which involved some mourners helping security forces lower the caskets into the graves that were then piled with earth.

“After starving our brothers for more than two weeks on the front lines they can't bury them like dogs. We refuse,” said Cheick Adama Tiendrebeogo, whose friend was among the dead.

Underscoring the extent of the insecurity, the government on Monday said a further nine gendarmes and around 10 civilians had been killed in an attack in the Central-North region. No further details were given.

International aid group Medecins Sans Frontieres (MSF) said a health centre it supports in the same district had been burnt down after the assault by unidentified armed men on the nearby gendarmerie post on Sunday.

In the wake of the recent protests against the government and French military forces, the authorities have blocked mobile internet access across the West African country, citing a legal provision related to national security.