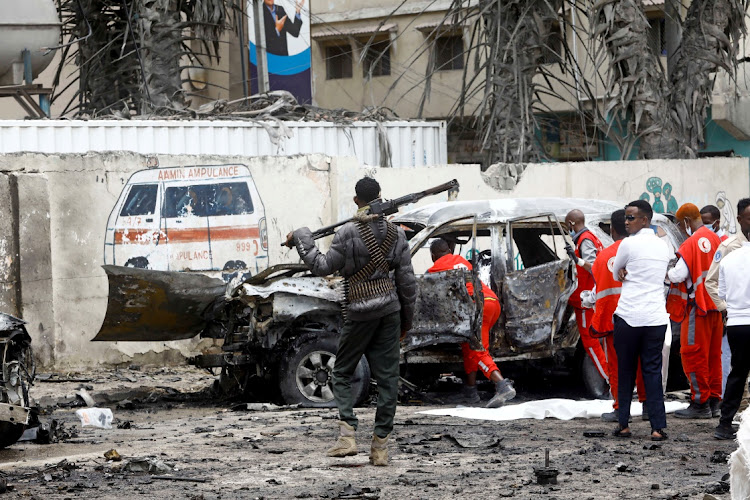 A police officer keeps watch as Red Crescent workers remove the body of a victim at the scene of a suicide car bomb explosion near the president's residence, in Mogadishu, Somalia, September 25, 2021.
Image: REUTERS/Feisal Omar

An explosion rocked Somalia's capital Mogadishu early on Thursday, triggering a plume of smoke which rose from the blast site amid gunfire, according to a Reuters witness.

There was no immediate claim of responsibility but Islamist group Al-Shabaab frequently carries out bombings in the Horn of Africa country.

The blast which occurred near the K4 junction in the heart of Mogadishu was so huge it collapsed the walls of nearby schools and also left cars mangled.

“We were shaken by the blast pressure, then deafened by the gunfire that followed,” Mohamed Hussein, a nurse at the nearby Osman Hospital, told Reuters.

He added he had been pulled from the rubble of a collapsed ceiling.

“Our hospital walls collapsed. Opposite us is a school that also collapsed. I do not know how many died,” he said.

Security officials could not be immediately reached for comment on what triggered the explosion and the casualties.

Al-Shabaab has been fighting Somalia's central government for years to establish its own rule based on its strict interpretation of Islam's sharia law.

A militia previously allied to the Somali government in its fight against militant group al Shabaab has captured two towns in central Somalia from ...
News
2 months ago

Somalian President Mohamed Abdullahi Mohamed has suspended the prime minister's power to hire and fire officials, he said in a statement on Thursday, ...
News
2 months ago

Somalia's first public oxygen plant opened on Thursday, in a ray of hope for a country where a lifesaving treatment for the coronavirus has been ...
News
2 months ago