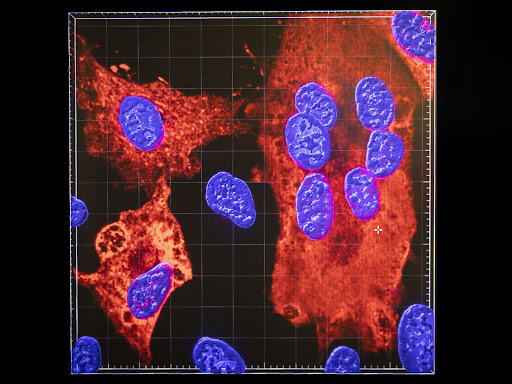 One of the theories is that this strain developed in an immuno-compromised person that harbored the virus for much longer than normal.
Image: Bloomberg

The speed at which the omicron variant appears to have accumulated its unusual pattern of mutations is a concern, according to Sikhulile Moyo, the scientist who first detected the new strain that has quickly spread across the world.

The velocity of the mutations also raises questions about how the variant evolved and adds to the puzzle of how transmissible the variant may be.

Moyo, director for the Botswana Harvard HIV Reference Laboratory and a research fellow at Harvard T.H. Chan School of Public Health, said in a briefing on Friday that viruses don’t accumulate mutations in a single step. Given the global lack of adequate sequencing of the coronavirus, it’s very hard to get a good grasp of how early the omicron variant developed.
“We are still trying to understand how so many mutations arose for omicron in a short space of time,” he said. “If you look at the previous lineages, if you look at alpha, if you look at beta, you can see that the mutations accumulated over time.”

One of the theories is that this strain developed in an immunocompromised person that harboured the virus for much longer than normal. Still, Moyo cautioned that there is no evidence for this. Another hypothesis being looked into is whether it could have been transferred from people into an animal host, adapted to that host relatively quickly and then moved back into humans.

When Moyo first sequenced the sample, taken on November 11 from foreign diplomats who had travelled together to Botswana, the variant it most closely resembled was B.1.1.263. That variant is known as the U.A.E lineage and was first detected in early April 2020.

When he looked more closely at B.1.1.263 he saw that strain had less mutations and ruled out what he was seeing as being the same. After asking for more information from Botswana’s health department about the people from whom the positive samples had been taken, Moyo and his team deposited their findings into an international database on November 23. A few hours later, a separate group in SA reported similar findings, followed by another group in Hong Kong that deposited a partial genome.

With omicron’s sheer number of changes, Moyo initially thought this would be a weak virus, he said. Instead, it seemed to be able to replicate quickly and evade parts of the immune system, causing a higher risk of reinfection.

In SA, daily confirmed Covid-19 cases have almost quadrupled from Tuesday as the variant spread across the country, showing how contagious the new strain may be.

“We hope that as data is coming in, people are going back to their freezers and they are pulling out old samples,” he said. Some scientists have done just that and have found that the omicron lineage was already circulating as early as October.

One of the big questions that scientists are trying to answer is how effective vaccines are against the omicron variant. That could be determined in a matter of weeks, in part, thanks to Moyo and his team’s fast response and transparency in sharing what they found with the world.

“I was enjoying the contribution that we have made in terms of this discovery, and how it might have averted a number of deaths,” he said. “But when you open the news, we’re also sad to see the number of countries closing their borders, shutting flights, a number of people, you know, tweeting and saying you scientists, what have you done, you’ve closed our Christmas and I believe that’s not how scientists should be rewarded.”

Zambia has detected its first cases of the Omicron coronavirus variant in three people who tested positive for Covid-19 in the past week, the health ...
News
1 month ago

Higher hospital admissions among children during a fourth wave of Covid-19 infections in South Africa that is driven by the Omicron variant should ...
News
1 month ago

Both bad and good news: what scientists now know about Omicron

It will take much study, but what’s clear is Covid-19 will keep spreading and mutating while people remain unvaxxed
World
1 month ago