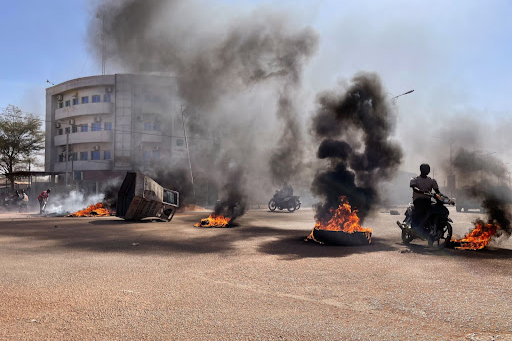 The government of Burkina Faso denied a coup attempt after heavy gunfire was reported at military facilities on Sunday.
Image: Bloomberg

The government of Burkina Faso denied a coup attempt was in progress after heavy gunfire was reported at military facilities on Sunday following months of protests calling for President Roch Marc Christian Kabore to step down.

Shooting was reported at the military airport in the capital Ouagadougou early on Sunday, a day after security forces fired teargas at demonstrators demanding Kabore’s resignation. Gunshots were also reported at the Baba Sy artillery regiment in Kaya, the nation’s fifth largest city, and at Sangoule Lamizana base and military prison. Reuters earlier reported the gunfire.

The government confirmed there had been gunfire around some military installations, but denied social media reports of a coup, administration spokesperson Alkassoum Maiga said in a statement. Kabore maintains his faith in the army, the statement said.

Eight soldiers were arrested on suspicions of an attempted coup earlier this month.

Pressure on Kabore to resign has been mounting over his administration’s failure to quell the deadly violence by Islamist militants linked to Al-Qaeda and Islamic State. Militants killed hundreds of soldiers and civilians last year, forcing more than 1.5-million people to flee. The insurgents have targeted gold-mining operations, the country’s main source of income.

Kabore has been in power since 2015, a year after long-serving leader Blaise Compaore was ousted in a popular uprising.

SA's royal couple of epidemiology have bagged another award.
News
6 months ago

After a year as an emergency department nurse at a busy Toronto hospital in the middle of the coronavirus pandemic, Aimee Earhart called it quits ...
News
6 months ago