Since 2017, Mozambique’s government has with the help of Southern African soldiers, including SANDF members, been battling a deadly insurgency in the country's northern province of Cabo Delgado. File photo.
Image: Dmitry Kalinovsky/123rf.com

SA soldiers have been involved in months of pitched battles against forces of an Islamist-backed insurgency in Mozambique, destroying enemy bases and capturing hundreds of weapons and fighters.

The Samim force deployed in Mozambique's northern province of Cabo Delgado includes soldiers and military equipment from SA, Botswana, Angola, Lesotho, Tanzania, Malawi and the Democratic Republic of the Congo. 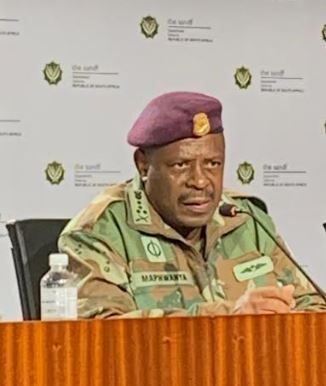 Maphwanya not deny reports that the SANDF would deploy air force Rooivalk helicopters and said additional troops were ready to be deployed, with the SA navy frigate, the SAS Spioenkop, already patrolling the Mozambican Channel to counter the insurgency’s maritime capabilities.

“Five hundred specially trained infantry and special forces operators are in Mozambique. Another 1,495 troops are ready for operational deployment as and when necessary.”

SANDF troops, as part of the Samim force, had been operating alongside troops from Mozambique and Rwanda.

Rwanda and Mozambique have a bilateral security agreement, which has seen hundreds of Rwandan soldiers deployed in Mozambique.

Maphwanya said as part of Operation Buffalo, which took place between October 2021 and January, Samim forces, including SANDF personnel, had been involved in intense fighting.

“In the fighting, numerous bases were destroyed, 31 enemy fighters killed and 16 women, 12 elderly people and eight children, who had been kidnapped by the enemy, were rescued.

The SANDF continued to inflict heavy losses on “these enemies and terrorists”.

The South African National Defence Force is briefing the media about its role in SADC's mission in Mozambique.
News
4 months ago

“The war is one against terror. It has not been without cost to our soldiers. We have lost a special forces operator, Tebogo Radebe.”

Radebe was killed in an ambush in December.

Maphwanya said the forces had managed to recapture numerous villages held by the insurgents and allowed people who had been displaced to return to their homes.

“The SANDF is helping to hold the terrorists at bay. Our forces will remain until terrorism is eradicated from the area and security restored.

“We would be foolish to think we cannot be affected by terrorism. Failure to stay with the task in Mozambique will result in SA having to deal with a terrorist spill-over into this country, which will cause grave security issues.”

The next phase will still see troops having the authority to seek out, attack and destroy insurgents

SANDF joint operations chief Lt-Gen Siphiwe Sangweni said the current phase of the mission, while still robust, was changing to one where Samim forces took on a peacekeeping role.

“This problem cannot be resolved solely by the military. The new phase does not mean the forces will be less robust or aggressive. Whereas the previous phase of the mission involved a small contingent of soldiers, the new tasking will see even more boots deployed on the ground from the countries involved in the mission,” said Sangweni.

“While this phase will be one of peacekeeping, helping to restore law and order and civil governance and get people back to their homes and jobs, the next phase will still see troops having the authority to seek out, attack and destroy insurgents.

“While we believe we have severely weakened the insurgency’s strength by killing their leaders during Operation Buffalo and before the start of the operation, and by attacking them in their territories, the problem is these terrorists operate in small cells, often independently of each other, with their own leaders, with the support of people who have been radicalised.

“This is a difficult fight. It will be won through hearts and minds operations, by bringing people back to their villages and getting them economically [stable] and feeling safe.”

A summit of the Southern African Development Community has directed the head of mission to co-ordinate with Mozambique on the implementation of a ...
News
4 months ago

'To this day I don't know about my family': Tales of trauma from Mozambique's insurgency

'Some people had their arms, heads and legs cut off'
Opinion & Analysis
4 months ago