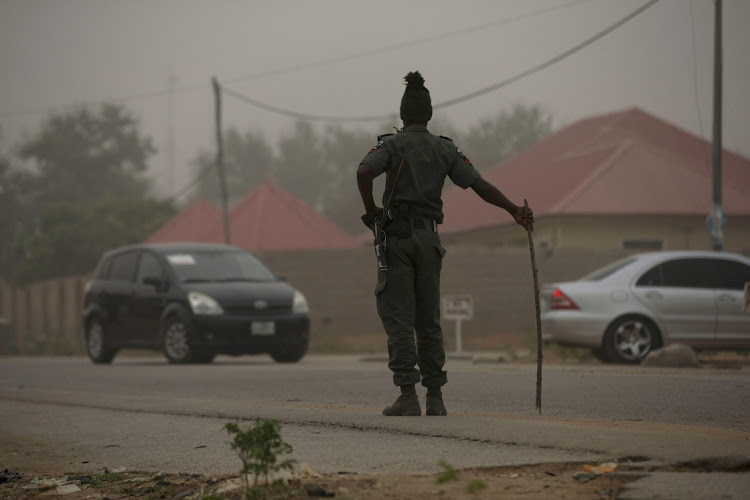 A policeman keeps watch on the road leading to Taraba state electoral commission during the announcement of the results of the Governorship and State assembly elections in Jalingo April 12, 2015.
Image: REUTERS/Afolabi Sotunde./File Photo

Islamic State claimed responsibility for an explosion that it said killed or injured 30 people at a market where alcohol was sold in Taraba State, Nigeria, marking an expansion of the area where the extremist group operates in the country.

Northeast Nigeria, especially the states of Borno and Yobe, have been in the grip of Islamist insurgencies for over a decade, but Taraba, located at the eastern end of Nigeria's Middle Belt central region, has not previously been attacked.

The explosion took place on Tuesday in Iware, a rural town, and local police initially said three people were killed and 19 injured. They could not immediately be reached on Thursday to comment on the Islamic State claim or casualty count.

In a statement posted late on Wednesday on a Telegram messaging channel used by Islamic State to distribute its propaganda, the group described those who detonated the bomb in the market as “soldiers of the caliphate in central Nigeria”.

The statement said the attack had struck “a gathering of infidel Christians” and expressed satisfaction that the drinking spot had been damaged. It did not break down the casualty figure into dead and injured.

The whole of Nigeria, Africa's most populous nation, has been suffering from a rise in crime and violence, worsened by the economic hardship caused by the COVID-19 pandemic.

Armed robberies are rife everywhere, kidnappings for ransom have become increasingly common, and the northwest has been hit by mass abductions of children from schools as well as indiscriminate attacks on towns and village by armed gangs.

The worst and longest-running crisis, however, is in the northeast, where rival Islamist groups Boko Haram and Islamic State in West Africa (ISWAP) have killed, abducted and looted on a huge scale while fighting against the Nigerian military.

In the latest attack, on the town of Geidam in Yobe State, Boko Haram fighters came in the early hours of Thursday and burnt down a school and several private buildings, according to two residents and two security sources.

The residents said a local drinking spot selling beer had been attacked. One said he had seen nine dead bodies, while the other said he had seen several dead including two women. The authorities were yet to release a death toll.