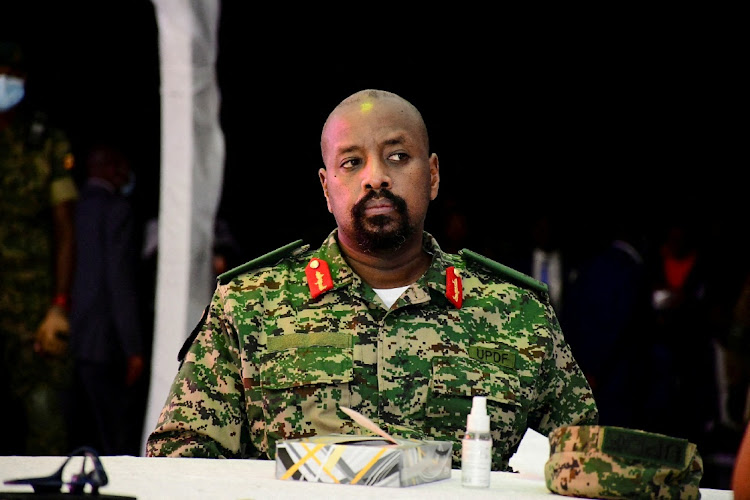 The soldier son of Uganda's long-serving President Yoweri Museveni is signalling his readiness to take over his father's job, with comments on global affairs from Ukraine to Ethiopia and birthday festivities akin to political rallies.

However, should he run instead of Museveni in the next presidential election due for 2026, Muhoozi Kainerugaba would face stiff opposition from opponents determined to prevent a family dynasty in the East African nation.

Trained at both Britain's Sandhurst military academy and the United States' Fort Leavenworth, the 48-year-old is a lieutenant general who commands Uganda's land forces and is widely regarded as the de facto head of the military.

Though Ugandan law bars serving officers from party politics, he has promised a policy platform soon, projected himself as a champion of youth, and spoken of his ambition.

"When Team MK wins power in this country, which we will! Our first act will be to increase the sports budget!" he tweeted earlier this month after nationwide rallies for his birthday.

Though reticent and taciturn in person, Kainerugaba is a bubbly character on social media, trading barbs with opposition figures and weighing into politics.

"Putin is absolutely right," he wrote four days after Russian President Vladimir Putin's invasion of Ukraine, despite Uganda's traditional alliance with the West.

"The majority of mankind (that are non-white) support Russia's stand in Ukraine."

He has also backed rebellious forces in Ethiopia's north Tigray and threatened to intervene in a coup in Guinea.

For weeks around his 48th birthday on April 24, ruling party supporters held rallies and charity events, many wearing T-shirts with Kainerugaba's image.

He joined a marathon in Kampala and a party at a cricket pitch in Entebbe in his honour. On the day of his birthday, his father hosted a celebratory dinner with senior officials and Rwanda's President Paul Kagame present.

"The fact that all those who used to abuse me on a daily basis are now being forced to swallow their words by the people is great!!" Kainerugaba tweeted earlier this month.

Two opposition lawmakers in Uganda were charged with murder and remanded on Wednesday for the second time in a month, an official with their party ...
News
9 months ago

The military's dominance of politics and his father's long incumbency are a formidable platform for Kainerugaba should the 77-year-old Museveni make way for him to run.

"He's grown up in State House. That should give him a huge headstart that no other person has. In that sense he's incomparable," said Moses Khisa, a Ugandan political scientist at North Carolina State University.

But analysts also say Kainerugaba lacks his father's political canniness. Museveni led a rebel movement to power in 1986 and has navigated his way through six presidential elections punctuated by violent crackdowns on the opposition.

Though initially feted by the West as an ally in the war on Islamist rebels, Museveni's rule has been marred by allegations of torture, sexual violence and killings by the security services. The United States has sanctioned a senior police official, Major General Abel Kandiho, for "horrific" abuse.

Museveni, who says he is the guardian of law-and-order, has not said if he intends to seek another term nor commented on his son's political activities.

But many Ugandans interpret Kainerugaba's behaviour as evidence of his father's green light.

Opposition parties are ready to fight him.

"His father has been in power for 36 years, what have they (youth) benefited?" scoffed David Lewis Rubongoya, secretary general of the opposition National Unity Platform, noting widespread poverty and unemployment.

"You can not say you're championing the vision of the youth when you're the one abducting and killing them," added Rubongoya.

Uganda's president Yowreri Museveni on Friday introduced sweeping new anti-coronavirus measures including a ban on all vehicular movement except for ...
News
1 year ago

A Ugandan military court on Monday released on bail 18 supporters of singer-turned-opposition leader Bobi Wine detained since the start of the year ...
News
1 year ago

Uganda's President Yoweri Museveni on Sunday re-imposed a strict lockdown that included the closure of schools and the suspension of inter-district ...
News
1 year ago