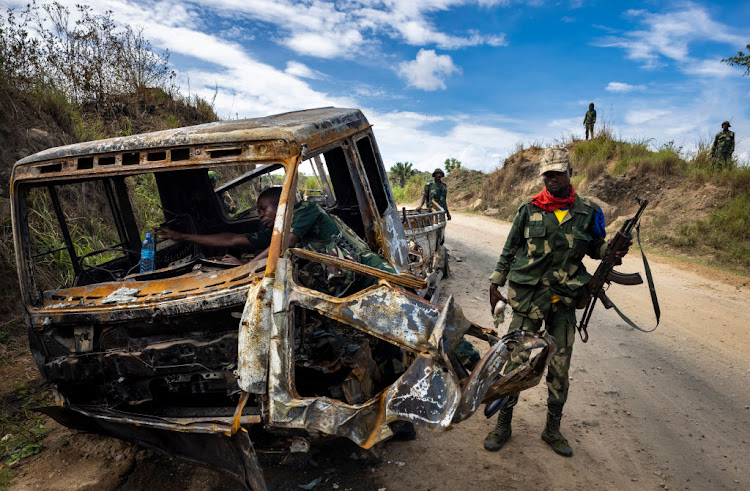 In the Democratic Republic of the Congo at least one journalist has been killed in the past year for doing his job as the Congolese Army battles Islamic terror group ADF, responsible for this ambush in Mbaou, Beni, a year ago.
Image: Brent Stirton/Getty Images

The Democratic Republic of the Congo has summoned Rwanda's ambassador and suspended RwandAir flights to Congo in response to what it says is Kigali's support for M23 rebels carrying out a military offensive in its eastern borderlands.

Rwanda denies supporting the rebels, who advanced as close as 20km this week to eastern Congo's main city of Goma and briefly captured the army's largest base in the area.

Congo and UN investigators had also accused Kigali of supporting the M23 during a 2012-2013 insurrection that took Goma before being forced back and chased into Uganda and Rwanda. Kigali denied doing so.

Congo's government spokesperson Patrick Muyaya announced the suspension of flights from Rwanda's national carrier and the summoning of the ambassador late Friday night after a meeting of the national defence council.

He said the government had designated the M23 a terrorist group and would exclude it from negotiations being held in Kenya with militia groups active in eastern Congo.

“A warning was made to the Rwandans, whose attitude is likely to disrupt the peace process ... where all the armed groups, except for the M23, are committed to the path to peace,” Muyaya said.

Rwanda's government was not immediately available for comment on Saturday.

On its website, Rwanda's army requested the release of two Rwandan soldiers it said were “kidnapped” along its border with Congo.

An image circulating on social media of two men in Rwandan military uniforms surrounded by Congolese soldiers has been cited by Congolese users as evidence of the Rwandan army's presence inside Congo.

Congo's government has not commented on the photo, but Muyaya presented video footage during his remarks showing munitions and a military uniform that he said belonged to Rwandan forces and were recovered by the Congolese army.

The M23 and Rwanda's government have, in turn, accused Congo's army of collaborating with the Democratic Forces for the Liberation of Rwanda (FDLR), a militia founded by ethnic Hutus who fled Rwanda after participating in the 1994 genocide. Congo denies this.

Rwanda invaded Congo in 1996 to pursue the militiamen. Eastern Congo has experienced near constant conflict since then due to foreign invasions and insurgencies by rebel groups.

Cause for concern as three cases suffer acute bleeding, while resistance to isolation, vaccines slows progress
World
1 month ago

Fighting in eastern Democratic Republic of Congo over the past week between the army and M23 rebel group has forced more than 72,000 people from ...
News
1 month ago

The African Development Bank is looking to source around 500,000 tonnes of fertiliser for west Africa by the end of August as an emergency stopgap to ...
News
1 month ago