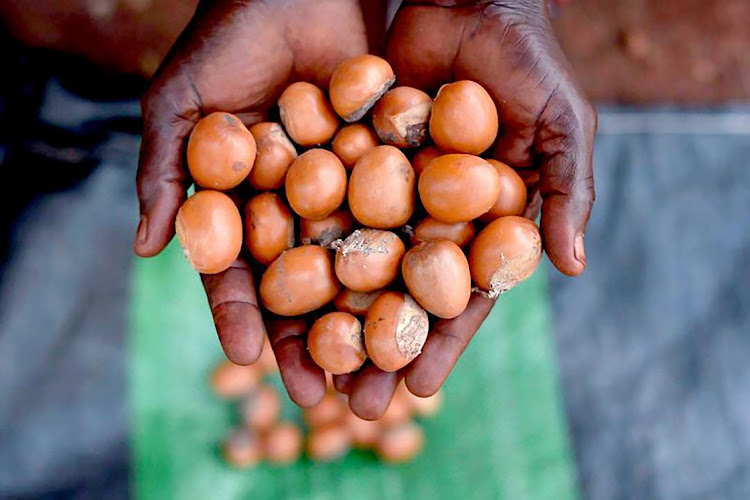 Sitting on an anthill in northeast Uganda, local clan leader Justine Tooyero watched wistfully over the few shea trees visible in the distance, standing isolated amid many stumps.

As a child, Tooyero heard fireside folklore about how his Acholi people had protected the forests for generations and discovered the value of the “sacred” shea tree — whose fruit and seeds are used in medicine, cooking and cultural rituals.

Today, the 45-year-old is striving to protect the trees from illegal loggers who are cutting them down for charcoal to sell — a lucrative trade as most Ugandans rely on it for cooking.

Despite a government ban on the cutting and transportation of shea trees in 2018 — and the sale of shea logs and products — they are still being felled in great numbers by charcoal dealers in northern Uganda, according to local leaders and experts.

Rising temperatures and erratic rainfall are making matters worse as the trees produce less fruit and drought-hit farmers turn to the wood for additional income.

“They (the trees) are communicating to us,” he told the Thomson Reuters Foundation while pointing towards the shea trees in Uganda's Agago district, 450km (280 miles) north of the capital Kampala.

“They have been resilient long enough and now they need our help,” added Tooyero, whose Abunga Lamili clan means “forest dwellers” in the Luo language.

Since 2016, he has teamed up with local chiefs, district authorities and a network of citizens to protect the trees.

“We are working with four chiefdoms and 100 informants who also work with the police to arrest illegal charcoal dealers in hotspot areas,” Tooyero said. More than 200 arrests have been made so far this year, with about 35 dealers jailed, he added.

The group is also trying to teach people about the economic value and environmental importance of the endangered species — whose numbers are dwindling not just in Uganda but across the so-called “shea belt” stretching from Senegal to South Sudan.

Peter Cronkleton, a senior scientist at the centre for International Forestry Research, said people in northern Ghana — mainly women — had not only reported shea trees being harvested for fuel, but also that increasing wildfires were damaging them.

Millions of women across West and East Africa financially rely on the trees as they crush the nuts to produce valuable shea butter that is widely used in soaps, cosmetics and food.

And environmentally, shea trees help create an agroforestry landscape on farmland that acts as a carbon sink while the cover they provide leads to higher water infiltration, protecting against desertification and slowing forest degradation.

'OUR HANDS ARE TIED'

Extreme weather in northern Uganda is fuelling the threats to shea trees, in two main ways.

Some farmers frustrated by poor rains are cutting down the trees to sell charcoal to feed their families, while rising heat is making them less productive, scientists warned.

“The high temperature in the region is killing pollen in female flowers,” said Laban Turyagyenda, director of research at the Ngetta Zonal Agricultural Research and Development Institute.

“This prevents pollination and ... (there are) no fruits,” added Turyagyenda, whose organisation is based in the northern city of Lira.

Northern Uganda is a hub for commercial charcoal production, and it also supplies neighbouring nations such as Kenya and South Sudan. Shea trees are often targeted because the charcoal it provides is said to burn for longer and produce less smoke.

A study by Makerere University in Kampala found that the number of shea trees — juveniles excluded — per hectare on fallow land fell from 20 in 2008 to between 10 and 15 in 2017.

Yet Makerere lecturer Patrick Byakagaba said there was scant data on how many shea trees had been felled since 2018 due to a lack of state resources for monitoring and because charcoal dealers often uproot the whole tree, leaving no stumps to count.

Clan leader Tooyero said his group was carrying out at least three operations a week to crack down on charcoal dealers.

For example, he said, informants rely on the fines issued to culprits to fund their work and logistics including transport.

Yet it is not just charcoal dealers seeking quick profits who are cutting down shea trees.

“Our hands are tied,” said Nelson Ojara, 37, a farmer in Omugu village.

“I had to stop farming because I can't afford machinery for irrigating my farmland when there is no rain. Nowadays I cut trees for charcoal burning so that I can buy food to survive”.

Cultural leaders in northern Uganda, such as Rwot Kasimiro Ongom of Patongo chiefdom, worry that the shea trees are producing less fruit because the “gods are angry” about them being felled for charcoal.

They are spreading this message among their communities in an attempt to stop the practice.

“Usually culture makes it a taboo to cut valuable trees like the shea, and if you do so, you are told that you will be hurt,” said Michael Tebere, a researcher on environmental issues.

Researchers such as Turyagyenda, meanwhile, are taking more practical measures to protect the shea tree population.

His research institute is using a grafting method, which can help shea trees mature in 10 years instead of 25.

Since last year, 4,500 grafted shea seedlings have been distributed in northern Uganda to replace the felled trees and also older ones which are now less productive, Turyagyenda said.

The research institute is also helping people — especially former farmers who have resorted to charcoal burning to make money — by teaching them skills including beekeeping and mushroom farming, as well as how to make wine from shea fruit.

But some local leaders, including Ongom of Patongo, fear shea trees will continue to be cut down, and “bad omens” persist, unless offenders face stricter punishments.

“Our forefathers knew what they were doing and that is how our trees survived for all these generations,” Ongom said.

“So the least we could do is show respect for them by protecting these trees to benefit our children in future.”