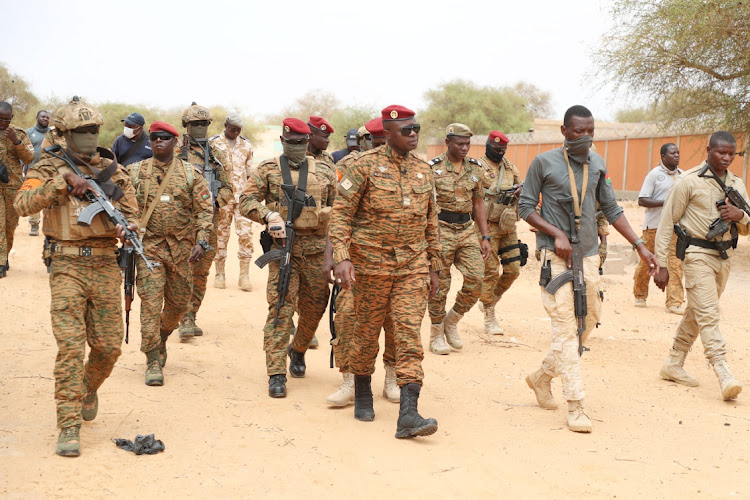 Burkina Faso President Lieutenant Colonel Paul-Henri Damiba is surrounded by soldiers, as he arrives to motivate his troops, after armed men killed civilians and militaries over the weekend in Seytenga, at airport in Dori, Burkina Faso June 15, 2022.
Image: Burkina Faso's Presidential Press Service/Handout via REUTERS

The UN refugee agency (UNHCR) called on Friday for urgent support to some 16,000 newly displaced people who fled one of Burkina Faso's deadliest militant attacks last weekend that left at least 100 people dead.

Soldiers have so far recovered 79 bodies after an attack on Saturday night in the northern province of Seno. It was the deadliest attack in at least a year in the West African country, which is battling an insurgency by groups linked to al Qaeda and Islamic State.

No-one has claimed responsibility for the attack.

“UNHCR is alarmed at the recent escalation of violence against civilians by armed groups in Burkina Faso that has forced thousands to flee, placing humanitarian resources under strain as insecurity continues to plague the central Sahel,” spokesperson Matthew Saltmarsh told reporters.

He said that since June 12, thousands of mostly women and children have arrived in the town of Dori in eastern Burkina Faso, after fleeing the attack.