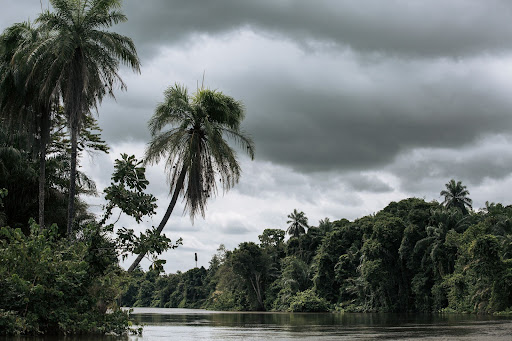 Scientists have increasingly stressed the importance of peatlands in slowing climate change because of their ability to store carbon, rather than release it into the atmosphere. Peatland covers only about 3% of Earth’s land surface but stores about one-third of its soil carbon, the scientists said.
Image: Bloomberg

The Congo Basin’s peatlands, an essential bulwark in the fight against climate change because they contain the largest stock of carbon held in tropical peat in the world, are 15% bigger than previously thought, according to research published in Nature Geoscience.

The findings are the result of the first extensive survey of the peatlands in the Democratic Republic of the Congo, which account for two-thirds of what is now an estimated 167,600 square kilometres (64,711 square miles) of the habitat in central Africa.

Scientists have increasingly stressed the importance of peatlands in slowing climate change because of their ability to store carbon, rather than release it into the atmosphere. Peatland covers only about 3% of Earth’s land surface but stores about one-third of its soil carbon, the scientists said.

The Congo Basin peatlands alone contain about 29 billion tonnes of carbon, equivalent to about three years of worldwide carbon-dioxide emissions, Bart Crezee, a PhD candidate at the University of Leeds and the study’s lead author, said in an interview Monday. This figure doesn’t include the carbon captured by the vegetation above the ground, he said.

The peatlands were mapped for the first time by scientists in 2017, and for the moment they remain relatively untouched, Crezee said.

That could soon change. Logging, mining and palm oil concessions together cover land accounting about 26% of the total peat stocks, according to the scientists.

“Only 8% of this peat carbon lies within nationally protected areas, suggesting its vulnerability to future land-use change,” the scientists say.

Last week, Congo launched a tender round for 30 oil and gas permits, several of which overlap with the peatlands. Congolese President Felix Tshisekedi said the country would strive to minimize environmental impact, but needed to develop its oil industry to improve the living conditions of its citizens, who are among the world’s poorest.

Oil exploration in environmentally sensitive areas will first need approval from the environmental ministry and would use “the most modern technological means of protecting the environment, fauna and flora and preserve ecosystems and ecological balance,” Tshisekedi said.

Any development in the peatland region could lead to serious damage if it dries out the peat, Crezee said. Water keeps the dead branches and roots in the soil from breaking down and being released as carbon dioxide into the atmosphere. Congo’s peatlands are relatively dry in comparison to the climate of similar stocks in Indonesia and Peru, he said.

“We know very little about how water flows in this ecosystem, where the water comes from and where it goes,” Crezee said. “It could already be that these peatlands are close to the climate threshold of drying out.”

Keeping the central Congo Basin peatlands wet “is vital to prevent peat carbon being released to the atmosphere,” the scientists said.

At the same time, as it pursues oil exploration, Tshisekedi’s government is also looking to profit from Congo’s importance in the climate-change fight. Last year, the country signed a five-year, $500 million pact with the Central African Forest Initiative to protect its wetlands and tropical forests. The disbursement of the money is contingent on it meeting agreed milestones.

Congo is the site of most of the Congo Basin rainforest, the second-largest in the world after the Amazon.

In the lead up to November’s United Nations climate-change conference in Egypt, COP27, Congo is also set to host a series of pre-COP meetings in September and October for scientists and ministers.