Finally‚ Ford SA has confirmed that the risk of its Kuga SUV catching fire is confined to a particular model - the 1.6-litre EcoBoost - “possibly” as a result of engine overheating. 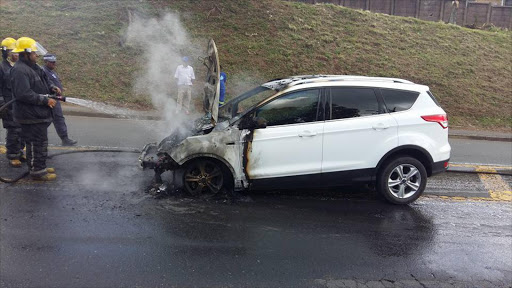 If you are among the estimated 6300 owners of Kugas bought between December 15 2012 and October 20‚ 2014‚ get your car to a Ford dealership as soon as possible to have the vehicle’s coolant system checked out.

“Dealers will check the coolant concentration level and for any leaks or damage to the cooling system‚ plus conduct cooling system pressure tests‚” Ford SA spokesman Rella Bernardes told TimesLive on Thursday.

The 1.6-litre engine was replaced by a 1.5-litre engine in the Kuga two years ago: neither the 1.5-litre nor the 2.0-litre models are affected by what Ford is calling a “dealer maintenance check”.

Until now‚ Ford SA has failed to be drawn on the possible cause of the fires which have broken out in an alarming number of Kugas - 38 at last count‚ according to the siblings of Reshall Jimmy‚ who lost his life in a Kuga inferno while holidaying at Wilderness a year ago.

Earlier this week the National Consumer Commission (NCC) said Ford would instruct its dealerships nationwide to conduct “safety inspections” on all Kugas sold in the country as a “precautionary measure instituted at the behest of the NCC”.

That announcement had many owners of 1.5-litre and 2.0-litre Kugas making unnecessary trips to dealerships.

On Thursday‚ Ford announced: “While our investigations into the incidents are not complete at this time‚ we have found that the fires may be a result of engine overheating.”

Yet the company continues to maintain that the fire in Jimmy’s Kuga on December 4 last year started at the back of the vehicle‚ not in the engine compartment.

“That is clearly evidenced by the level of fire damage to the rear and the relative lack of damage to the front of the Kuga‚” Ford SA said yesterday.

“We have requested access to the police report and other investigative materials to better understand all the facts concerning the case.”

The claim that the fire started in the rear - and the forensic report it is based on - does not sit well with the Jimmy family and renowned forensic investigator Dr David Klatzow‚ who has been hired by them.

“The forensic investigation Ford did was very amateur‚ and it has come to the wrong conclusion‚” Klatzow said.

“And Ford knows that two independent witnesses have stated in affidavits that the fire began at the front of the vehicle‚ and they also know we have a video shot by a passer-by which supports this view‚” he said.

Klatzow also claims that one of Ford’s forensic experts initially said the fire in Jimmy’s Kuga started in the front‚ then later changed his view‚ but Ford denies this.

First-hand accounts of Kuga owners who escaped their burning vehicles are uncannily similar in describing where the fires started - in the engine.

Last Thursday‚ Nivesh Sewpersadh of Reservoir Hills‚ outside Durban‚ had his 2014 Kuga checked out by a Ford dealership in Pinetown - which had serviced his vehicle from new - when a service light flashed up before the vehicle’s service was due.

He was assured that it was safe to drive.

But two days later‚ ironically on his way back to the dealership because the service light was back on‚ things went very wrong.

He stopped the car‚ leapt out and ran across the road.

The very next day‚ Sabelo Cele had the same experience in Gauteng.

“I was driving to Lanseria Airport on the N1 south to drop off my wife and young son‚” he wrote in a Facebook post. “I checked my rear view mirror and I saw smoke coming from the back of the car.

So why no recall?

By the end of February - the deadline the NCC has imposed on Ford SA to complete its investigation - it will have been 15 months since Rehsall Jimmy was burnt beyond recognition in his SUV‚ still wearing his seatbelt.

In that time‚ Ford has had experts examine the remains of the vehicle three times - 11 days after his death‚ a month after that‚ and then almost a year later‚ on December 5‚ after the Jimmy siblings had launched a Facebook campaign to get justice for their brother and prevent other deaths.

In stark contrast‚ just three months after Vanilla Nurse died on her second birthday when her family’s Honda Jazz caught fire in November 2009‚ Honda issued a recall of almost 20 000 Jazz models after establishing that in extreme cases the window switch in the driver’s door could overheat‚ resulting in a fire.

Klutzow‚ who is working on the Kuga case on the Jimmy family’s behalf‚ has urged Ford to follow Honda’s example. Responding‚ Ford SA spokesman Rella Bernardes said: “It is inappropriate for us to comment on the actions of others.

“Our decisions are driven by the data available‚ and when the data indicates action is needed‚ we move quickly on behalf of our customers.”

Hours before Ford SA announced that the fire risk was limited to 1.6-litre EcoBoost engine models bought between December 2012 and October 2014‚ Elizabeth Lumley‚ having been alarmed by reports of Kugas catching fire‚ took her 1.5-litre Kuga to the dealership in Mount Edgcombe to be checked out.

When she first approached the dealership about the check yesterday‚ she was expecting the issue to be treated with a sense of urgency‚ she told TimesLive.

“But I was told I’d have to wait a week before they could attend to my car. I was horrified by their blasé attitude - they’re weren’t prepared at all.”

When Lumley insisted that her car be checked out sooner‚ she was told to return today. “And I must admit they were waiting for me and were very efficient.”

She's relieved she doesn’t have to be afraid of her car anymore‚ since 1.5-litre Kugas have been excluded from the fire risk.

“I’d hatched an escape plan with my young kids‚ and I’ve been driving around with a heavy wrench in the cabin‚ to bash the windows out if we had to.”