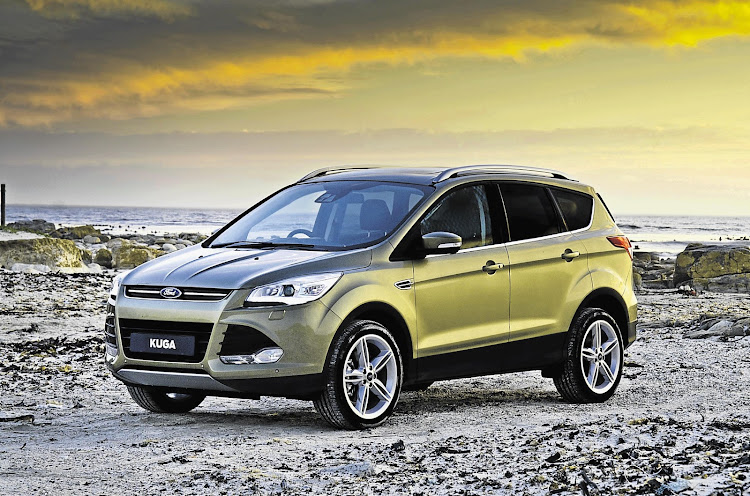 Phase 1 of the Ford Kuga recall was a PR disaster‚ as many Ford dealerships were unprepared‚ lacking both the parts needed and sufficient courtesy cars for affected clients.
Image: Supplied

It hasn’t been a good year for owners of the “fire fix recall” Kugas‚ but many remain happy with their cars despite the reactions of the general public.

“The other day a petrol attendant said he couldn't believe I was still driving a Kuga - this from a man who takes public transport to and from work every day!” said Leanne Jacobs of Virginia‚ Durban.

Jacobs‚ who bought her Kuga new from an Umhlanga dealership in 2014‚ is among the 4‚556 owners of 2013 and 2014 model year 1.6-litre Ford Kugas who were emailed by Ford South Africa on Wednesday and asked to return their cars to a dealership for Phase 2 of modifications designed to prevent them from catching fire.

Ford SA announced Phase 1 at a hastily convened media conference in mid-January‚ after almost 50 of the SUVs had caught fire‚ revealing that failures in the car’s coolant system had caused them to overheat and catch fire.

Another safety recall for fiery Kugas

Ford South Africa on Wednesday invited owners of the 4‚556 Kugas affected by its safety recall to return their cars for Phase 2 of the modifications‚ ...
News
3 years ago

Six months on‚ Phase 2 is about “additional precautions” - mainly the installation of a coolant level sensor which will flash up a beeping warning on the instrument panel when the coolant drops to a dangerous level.

“Ironically‚ my husband drives an Opel and his car’s coolant system has failed twice!” said Jacobs‚ an engineer at a refinery.

Asked if she still felt safe in her Kuga‚ she said she had been very concerned initially‚ but no longer. “They’ve identified the source of the problem‚ and fixed it‚” she said.

Phase 1 was a PR disaster‚ as many Ford dealerships were unprepared‚ lacking both the parts needed - including a new coolant bottle - and sufficient courtesy cars for affected clients.

Ford SA’s MD‚ Casper Kruger‚ is confident there won’t be a repeat in Phase 2‚ the manufacturer and its dealership network having spent months preparing for it. But he urged affected Kuga owners to make an appointment for the modification rather than dropping their cars at a dealership‚ unannounced.

Jacobs did just that on Wednesday. “It’s never fun to have to take your car in‚” Jacobs said‚ “but I understand that it has to be done.”

Pieter van der Westhuizen‚ who bought his Kuga from Fury Ford‚ Sandton‚ in 2013 said he’ll make his Phase 2 appointment when he returns from Dubai on Friday. “I felt really sorry for the dealership during Phase 1 - they were dealing with loads of angry people over issues which were of Ford SA’s making.”

He is in the process of “upgrading” to a Mercedes Benz SUV at a dealership which has undertaken to trade in his Kuga.

Ford SA was only able to say how many of the affected Kugas had been traded in at Ford dealerships - 900‚ which is 20%.

Since the January recall announcement‚ 88% of those 4‚556 affected Kuga owners have taken their vehicles in for Phase 1‚ Kruger said. “Those who haven’t can now have both Phase 1 and 2 done at the same time.”

• Meanwhile‚ response to the fire-related recall of 15‚600 Ford Figos and Ikons‚ announced by Ford SA a month ago‚ has been very slow‚ Kruger said. Only 13% of the affected cars - built in Ford’s Indian plant between August 9‚ 2004 and March 24‚ 2012 - have had the high pressure hose of their car’s power steering mechanism replaced.

• For information about either recall‚ contact Ford Customer Service on 0800-204-688 or email CRC3@ford.com

“I can’t get rid of this timeshare and I can’t afford the levies anymore‚ so I’ve left it to Julius Malema in my will.”
News
3 years ago

Do you need to blow your nose on thicker tissue? Cost not to be sneezed at

Those of us who have credit agreement payments to honour every month may have got a tiny bit of good news last week with the interest rate drop, but ...
News
3 years ago

Companies can take you for a ride with the small print

How often have you put your signature to a document without reading the terms and conditions in the tiny print?
News
3 years ago
Next Article