WATCH | How safe is the car you drive?: Crash test results revealed

They call it the Hardbody and boast of it being “African tough”, but Nissan’s NP300 one-ton bakkie has scored a shocking zero safety rating for adult passengers in an independent crash test.

Along with three other top selling South African hatchbacks - the Kia Picanto, Hyundai i20 and Toyota Yaris - the bakkie was found to have an “unstable” body shell.

The NP300, which is made in Nissan’s Rosslyn, Pretoria plant, is also sold in sub-Saharan African countries.

Hailed by Nissan SA on its website as “having earned an enviable reputation for reliability and ruggedness”, the bakkie and those four hatchbacks were bought from local dealerships by the London-based Global NCAP (New Car Assessment Programme) and transported to a crash test facility outside Munich. 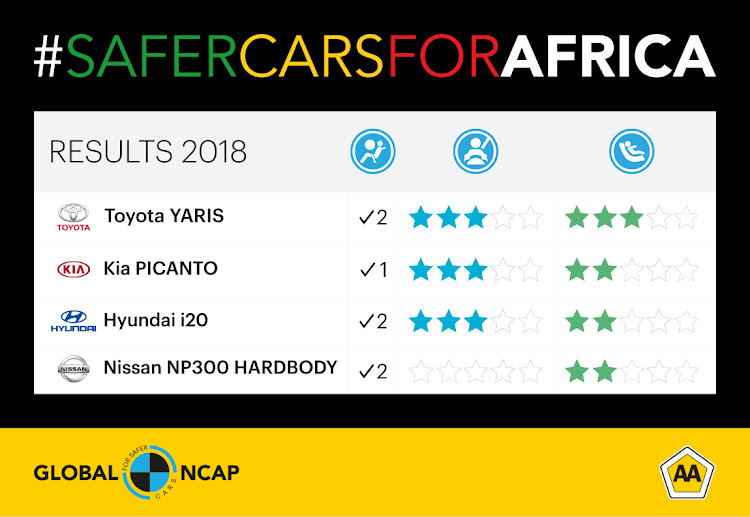 The brand new vehicles were last month fitted with crash test dummies and propelled one by one into a barrier, simulating a vehicle of similar size and weight, at 64km/hr.

After analysing the computer readings from the dummies - two adults in front and two small children in the back - the cars were awarded safety ratings.

None of them scored more than three out of a potential five stars.

Part of a “Safer Cars for Africa” initiative launched by Global NCAP in collaboration with SA’s Automobile Association (AA) last year, the safety ratings of those four vehicles were revealed at a press conference in Johannesburg on Friday morning.

Having scored a zero rating for the adult occupants, because of the “poor protection to driver head and chest”, the NP300 got a two star safety rating for the children - aged three and 18 months, strapped into their respective car seats in the back. 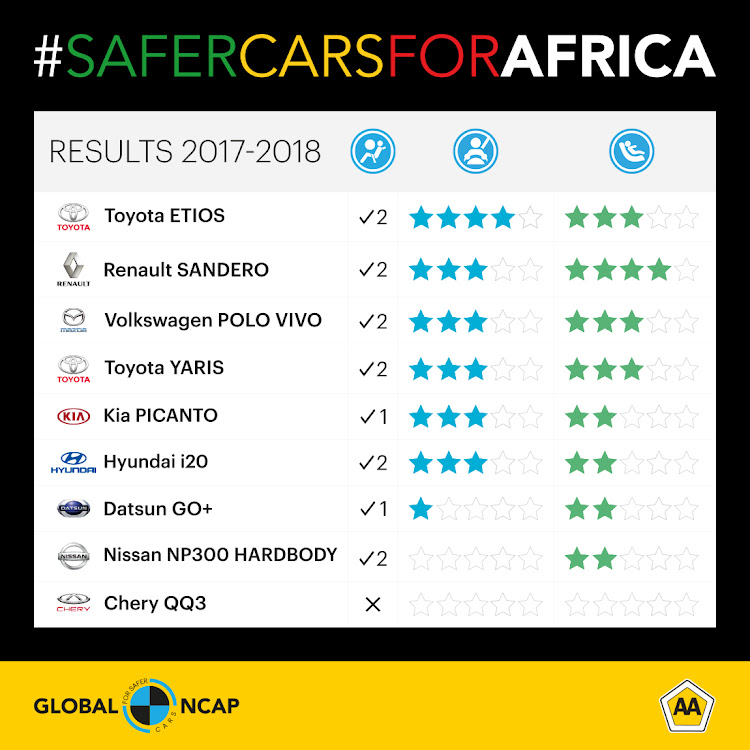 Horrifying footage of the crash shows the driver’s door breaking open on impact.

The double-cab bakkie, retailing for more than R300,000, was the sixth most sold light commercial vehicle in SA last month (October 2018), with 704 sales. Its cheaper stablemate, the single-cab NP200, was in third spot with 1,879 sales.

Hyundai has high hopes for new i10

Both the Hyundai i20 and the Kia Picanto were given a three-star safety rating for adults and two stars for  children, the seat carrying the three-year-old in the Picanto having come loose from its fastening on impact.

Best of the four was the Toyota Yaris, scoring a three-star safety rating for both adult and child passengers.

Shockingly, Global NCAP declared that only the Picanto’s body shell was “stable”, although its front footwell area was declared unstable. An unstable body shell means the car is  “not capable of withstanding further loadings”.

In other words, a crash at higher speed would probably see the vehicles disintegrate.

None of those vehicles could be sold in Europe, the US or Australia as they don’t have a key mandatory safety feature - electronic stability control (ESC), which is said to have saved as many lives as the seatbelt by preventing cars from skidding or enabling them to recover from skids.

WATCH | Driving a death trap? These are some of SA's unsafest cars

Zero. That’s the safety rating the Chinese-made Chery QQ3 scored in the first-ever independent crash test assessment of some of the most popular ...
News
4 years ago

And according to Latin NCAP secretary general Alejandro Furas, who witnessed the South African cars being crashed tested in Munich, an ESC module for a car in production - if it has ABS brakes - costs no more than 60USD - only R866.

But with very minimum legal requirements around safety equipment in South Africa, and relatively low consumer awareness and demand for them at the bottom end of the market, most manufacturers choose not to equip their “cheaper” vehicles for the South African market with ESC.

This despite the fact that South Africa has one of the highest car-accident fatality rates in the world – more than 14,000 people were killed on our roads last year.

A version of the Hyundai i20, for example, is sold in Europe with ESC as a standard feature, along with six airbags (as opposed to two in the SA model) and autonomous emergency braking. And it sells for less than 11,000 Euro, compared with the equivalent of about 14,000 Euro for the South African version which has just two airbags and ABS brakes.

How safe are SA's most popular cars?

Global NCAP and AA South Africa launched on Wednesday in Cape Town, with the ﬁrst independent crash test assessment of some of South Africa’s most ...
Motoring
4 years ago

Global NCAP believes that ESC, along with both frontal and side airbags, should be standard safety equipment in cars, Furas said.

“South African consumers are not less important than Europeans, Australians, Japanese or Americans, so why then should they receive inferior safety features?” he said.

“Global NCAP is of the opinion that vehicle safety should be democratised and we are working hard in that direction,” he said.

The organisation, along with the AA, is pushing for the introduction of mandatory crash test labelling for all new cars sold in South Africa.

It’s a move supported by the AA.

“We believe consumers have a right to know what the safety ratings are on the cars they want to buy,” says AA CEO Collins Khumalo.

Chinese manufacturers to focus on safety in 2018

Only two out of 25 car models currently priced under R160‚000‚ vetted by the Automobile Association in South Africa‚ have “acceptable safety”.
Lifestyle
4 years ago

Five things you need to know about the new Hyundai Creta

The new Hyundai Creta crossover is here to steal customers away from the likes of Nissan, Renault and Ford. Here are five things you need to know ...
Motoring
4 years ago