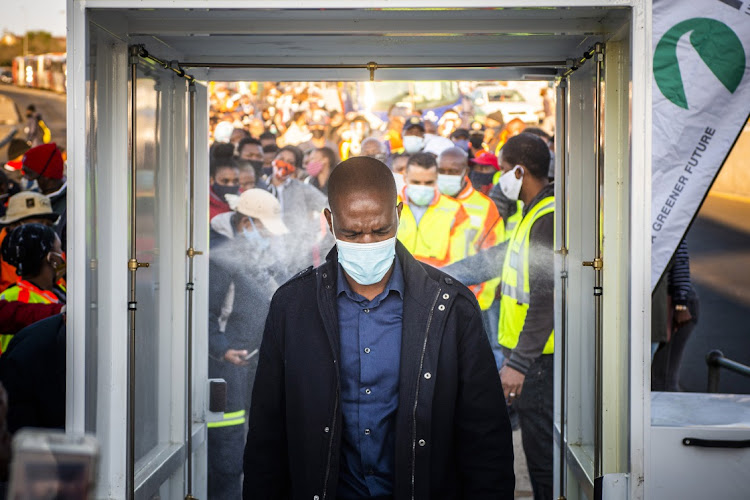 The spraying of people with disinfectants in booths or chambers is not recommended by the World Health Organisation (WHO). File image
Image: BLOOMBERG/WALDO SWIEGERS

Is compelling commuters and schoolchildren to walk through booths or tunnels which spray them with disinfectant really necessary as an anti-Covid-19 measure? Pretoria-based microbiologist Dr Lucia Anelich thinks not. Nor does the World Health Organisation (WHO) advise it.

The WHO issued an advisory recently saying the spraying of people with disinfectants in booths or chambers was “not recommended under any circumstances”.

Booths have been erected at some Gautrain stations and a few taxi ranks as well as in some private schools in preparation for the phased return of pupils on June 1.

“This practice could be physically and psychologically harmful and would not reduce an infected person’s ability to spread the virus through droplets or contact,” the WHO said. “Even if someone who is infected with Covid-19 goes through a disinfection tunnel or chamber, as soon as they start speaking, coughing or sneezing they can still spread the virus.”

“It’s sanitising beyond reason,” she said. “My colleagues in Ireland, Germany and New Zealand were astounded when I told them about these disinfectant booths.”

There was no evidence to suggest that people outside health care settings should be totally disinfected, Anelich said.

“More and more evidence is emerging that only about 10% of coronavirus transmission happens via surfaces — 90% is person to person transmission.”

There were concerns about the type of disinfectants used, their concentration, the contact time and the impact they could have on those who suffer from allergies and asthma, Anelich said.

She said she was particularly concerned for those people, such as commuters, who would be forced to endure being sprayed with disinfectant twice a day.

“Apart from possible impact on the very sensitive mucous membranes of our eyes and nose, it will kill the good bacteria we all have on our skin, which helps prevent us from getting sick.”

When it comes to customer satisfaction in South Africa, only one industry ranks lower than cellular network providers - medical schemes.
News
2 years ago

Responding, the Gautrain Management Agency (GMA) said it had decided to go beyond the “basic and essential measures” of compulsory mask wearing, physical distancing and regular train and station sanitising to pilot test “prototype thermal spray booths” at the entrances of its Midrand and Hatfield stations.

“In addition to thermal scanning, the booths also spray a light disinfectant mist from the sides of the booth, with the purpose of applying a suitable disinfectant in a fine mist spray onto the body and clothes of passengers from the shoulders down.

“With passengers entering the booths with compulsory masks on, inhalation of the mist is minimised. Irrespective, the compound used in the mist is SABS-approved as non-hazardous and suitable for industrial and home use.

“It is antibacterial, non-toxic, biodegradable and non-irritant in contact with human skin.”

The guidance from the WHO on disinfectant tunnels had “been noted”, the GMA said, “and will be part of our consideration of the use of the booths”.

Anelich said a disinfectant spray may have been approved by the SABS, “but it’s not clear whether it was approved for use on people, rather than surfaces”.

Actually, some people do just get the T-shirt without running the Comrades

Comrades Marathon Association explains the tough calls it has been required to take to ensure the sustainability of the event post-Covid-19.
News
2 years ago

Similar concerns are being raised by consumers on social media about the “hand sanitiser” being routinely sprayed on customers’ hands as they enter and leave stores.

Many have claimed the liquid left white spots on their clothes, indicating that it was bleach or chlorine-based.

Gary Kerr of KwaZulu-Natal tweeted: “I went to Checkers in South Coast Mall, Shoprite Margate and Checkers in Hibiscus mall.

“They are all using a very strong — it burns and causes blistering — chlorine-based disinfectant to sanitise customers and work staff.

“Why is Checkers spraying people with chlorine and other chemical-based disinfectants instead of alcohol-based hand sanitiser?”

TimesLIVE asked the Shoprite Group if any of its stores were using anything other than hand sanitiser on customers’ hands. Responding, the company said: “We use both alcohol and quaternary ammonium compounds-based (QAC) sanitisers — all comply with government’s regulatory and legislative requirements for use in our environment, are SABS approved and we have two reliable, accredited suppliers who provide our thousands of stores in the various countries we operate in.”

An increasing number of SA children are downing hand sanitiser at home during lockdown.
News
2 years ago

“Our providers and our stores undergo regular independent audits to ensure compliance and the stores have clear directives on the use — and where necessary, mixture — of the products, including test strips to confirm that the dilution is of the correct strength.”

While the products were not harmful when used on human hands, Shoprite said, “because all people have different tolerance levels, we advise that special care be taken when used repeatedly”.

“The directive has never been to use any form of bleach and should any of our stores be found doing so, steps will immediately be taken to correct this practice.”

Over 300,000 pupils are expected to return to schools across the province, education MEC Panyaza Lesufi said on Thursday.
News
2 years ago

Look! A 'coronasaurus' went shopping in the Western Cape - and customers loved it