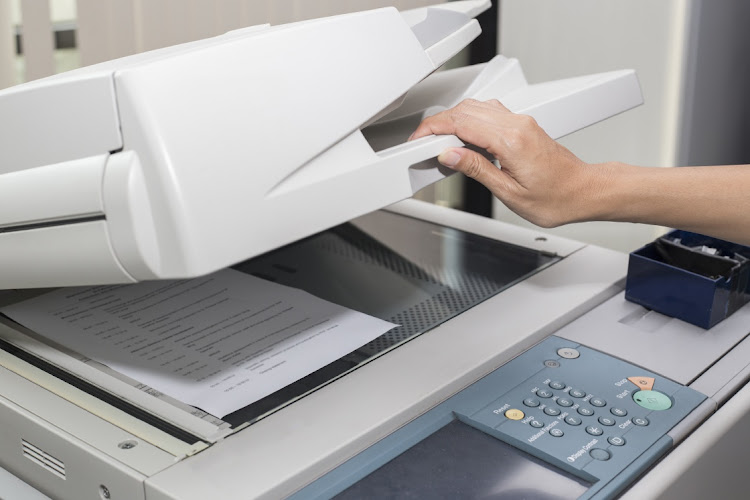 A small NGO must pay to service a printer they no longer have. To add insult to injury, the small print also allows for the escalation of the service charge by 30% per annum.
Image: Thapelo Morebudi

For many small business owners, taking out a contract for their office printer or switchboard system seems like a better option than buying the equipment outright, but many of those contracts are rip-offs in the extreme.

For one thing, many roll over for another full term — often five years — if the business owner forgets to cancel before the end of the initial term. That is highly prejudicial, and thus outlawed by the Consumer Protection Act — such fixed-term contracts can only continue on a month-to-month basis if the customer doesn’t pro-actively give written notice of cancellation.

However, there’s no such protection with business contracts, sadly. Should the business owner sell, close up shop or want out of the contract for any other reason, they’re often horribly tripped up by the small print of their contracts.

Gail signed a contract in early 2019 for a five-year lease on a PABX system for a small medical practice, and admits she failed to research “the exorbitant cost” before doing so.

She’s now selling the practice and the new owners don’t want to take over the system, leaving Gail to pay for it — at R1,019 a month — for another three years.

The company concerned is not willing to negotiate at all.

In Bob’s case, his small NGO signed a five-year contract with a company for a printer and gave notice as the five-year period was almost up.

However, because they signed a separate service-level agreement (SLA) for maintenance and the supply of toner for the printer, with a duration not of five years as with the printer, but six, they are being charged a R5,200 settlement fee.

“They calculated the penalty based on minimum monthly copies for a year,” Bob said.

Boxes of 'Cape salmon, Norwegian salmon and yellowtail' turned out to contain 'strange fish we had never seen before'.
News
9 months ago

The 72-month duration period in the SLA is in very small print in the terms and conditions and was not pointed out when the contract was signed.

“The SLA has only one purpose — to service the printer, a printer we no longer have.”

How conniving is that? To add insult to injury, the small print also allows for the escalation of that service charge by 30% per annum.

Please, business owners, be extremely wary of signing one of these equipment contracts. Make sure you’ve read every word of that small print.

You need evidence to make your case

Tina paid an Umhlanga beauty spa R4,000 upfront for a “special offer” package of six laser sessions, having been told the treatment would make her stretch marks and a small scar she’s had since childhood disappear.

Her first session was in December, and five sessions later, she says there have been no results whatsoever. She wants her money back, but has been told she’s the only one who hasn’t had good results. That old line!

“Is there any way I am entitled to a refund on some of the money spent or there is absolutely nothing I can do?”

To prove no result, there would have to be a “before” photos as comparison. There would also have to be some form of record of the spa’s promises regarding the effect of the treatment. Verbal promises don’t cut it. Sadly, Tina didn’t think to create this evidence for herself.

It’s a very good idea to get into the habit of taking photos or videos of your interactions with companies, and make sure what they tell you is recorded in writing, in an e-mail, for example. Such proof could very well be the reason you get justice should the deal turn sour.

Online marketplaces are a great way to flog your unwanted possessions or pick up a bargain, but many first-time sellers are duped by fraudsters and ...
News
10 months ago

Not for the first time, Banking Services Ombudsman Reana Steyn has issued a warning about vishing — bank fraud committed via phone call. That’s because many people continue to fall for the scam, mainly over 60s.

Steyn told the story of a 69-year-old pensioner who received a call from a fraudster claiming to be from his bank.

He told him the bank was in the process of stopping unlawful transactions made from his account, and asked him for the OTP (one-time pin) that had been sent by the bank. He obliged, and as a result R10,000 was stolen from his account.

He complained to the ombud’s office, and, Steyn said, “despite the pensioner being 100% at fault for the loss, as a gesture of goodwill, the bank gave him a full refund and educated him about the different types of fraud”.

However, a few months later, he fell for the same scam, losing R26,500. He reported the matter to the bank and his profile was blocked. He received another call from the fraudsters a month later and again disclosed his confidential banking details resulting in another R5,500 being stolen from his account.

Telesales agents invariably catch you off guard, but if you do agree to something, there is a five-day cooling off period
Opinion & Analysis
10 months ago

“While the bank declined to refund the R26,500, our office found the last transaction should not have been successful as his banking profile was supposed to be blocked,” Steyn said.

The bank agreed to refund the full amount of the last fraudulent transaction.

“We need to stress the fact that fraudsters are extremely sophisticated and convincing con-artists,” Steyn said.

“It would be foolish to think you will immediately see through the scam unless you are 100% clued up on these matters.”

'Plants cannot thrive in such soils, or take up water and certain essential nutrients,' says Dr Ailsa Hardie of the department of soil science at ...
News
9 months ago

Two SA innovators have created water treatment facilities to assist communities and schools that do not have access to clean water.
News
10 months ago