WATCH | 'They saved the whole shop with cooking oil!': But three centres lost to looters

On Sunday evening, the Müller Group's four shopping centres in KwaZulu-Natal were fully operational; on Thursday only one is intact, the other three having been stripped bare.

In one of them — the 15,000m2 Tugela Ferry Mall — the only shop that wasn’t looted was the Shoprite, thanks to quick-witted managers who grabbed bottles of oil from the shelves and poured it outside the store as the looters approached.

The widely shared video shows looters crashing to the floor as they hit the oil patch, to howls of laughter from the person taking the video.

'What is important is our lives': Retailers hit by looting plot comeback

"It often happens in difficult situations that our emotions can go from very high to quite low," says Massmart boss Mitch Slape.
News
10 months ago

But the R200m mall is what Müller calls “unoperational”, and under armed guard.

“A crowd of about 5,000 started gathering outside the mall at 1am on Monday, and by 6am they had pushed down all the fences, and began looting shops — 59 were stripped bare. They then set fire to the mall, but our security and centre management guys managed to contain it.

“We sent in a helicopter with security company personnel, armed with smoke grenades and stun guns, to help the police on the ground at both Tugela Ferry Mall and Mpophomeni Mall, but when they reported to us that the crowd had begun shooting at them, we told them to back off.”

At the group’s 5,000m2 Mpophomeni Mall near Midmar Dam, crowds gathered from early on Sunday evening, and when President Cyril Ramaphosa’s address ended, they stormed in and began “looting it to the bone”, Müller said.

“Once the 30 stores were empty, they began dismantling the building itself — lights, air-conditioning units, our diesel cart — and then they set the Shoprite alight, along with Ackermans, Pep, KFC and more.

“Next month the mall would have been serving that community for a year. Now it’s all gone.” 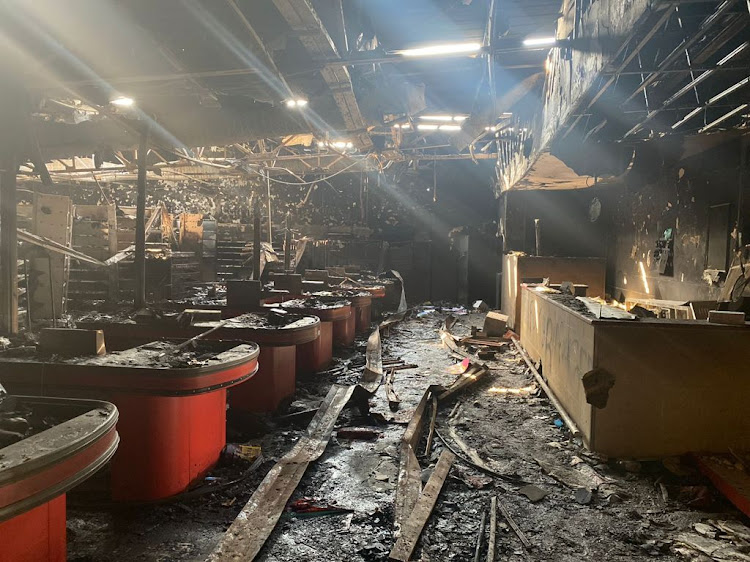 What’s left of the Shoprite in Mpophomeni Mall.
Image: Supplied

The looting went on until noon on Tuesday, Müller said, “when we got in a big team of armed guards to secure the site, day and night”.

On Monday evening, Müller got a call from the manager of the group’s massive 63-shop mall in Jozini — on the main route to Mozambique — to say a big crowd had started gathering.

“Then the looting started, and it went on the whole night until lunchtime Tuesday when the police and SANDF arrived.”

People continued to arrive by the busload for hours afterwards, hoping to get in on the free-for-all, Müller said.

“My centre managers were absolute heroes,” he said. “They were totally traumatised but they did everything in their power to protect the buildings.”

The group’s plans to build three more malls and two filling stations in KZN have now been placed on hold.

“We are busy building a mall in Bethal, Mpumalanga, which is scheduled to open in November,” Müller said. “We pray the community leaves it alone.” 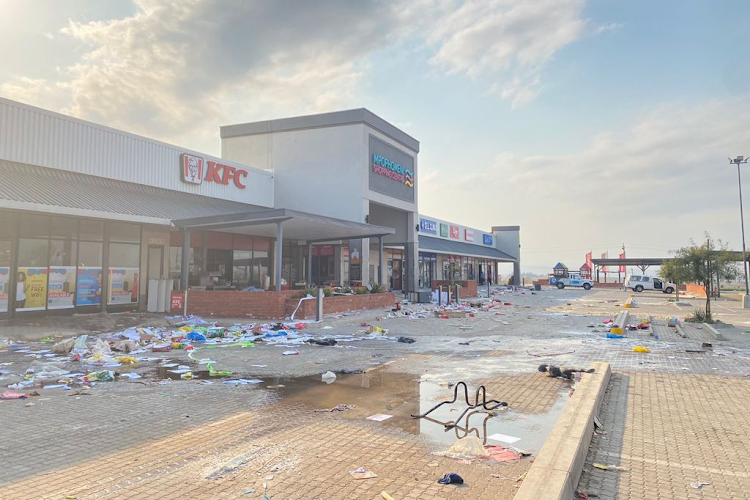 Asked if the group intends to rebuild and restore the three gutted malls, he said: “I am scared to answer that question. My heart says no, but my brain says we have to.

“It’s such a tough one. We are developers, but do you really want to rebuild for people who just burnt it down? On the other hand, if I look at it unemotionally, life goes on — we have to rebuild.”

On Wednesday, a new crowd gathered outside Mpophomeni Mall’s gates, but they wanted to be let in for very different reasons: “My manager told me they were members of the local community, wanting to know if they can help clean up.”

Only the group’s Newcastle Corner shopping centre is still operating.

“The town's residents got together to protect this town. We are hanging on for dear life,” said Müller, who is based there.

“But from here south, and all the way to the coast, there is very little left. We estimate that more than 200 shopping centres and buildings were looted over RSA.

“The big question is: who caused this and what does the future hold?”

Acting minister in the presidency Khumbudzo Ntshavheni said 208 incidents had been reported overnight: 52 in Gauteng and 156 in KwaZulu-Natal.
News
10 months ago

A critical medicines shortage in KwaZulu-Natal is inevitable, given that scores of pharmacies have been totally looted and a pharmaceutical ...
News
10 months ago

Some 40,000 firms have been affected in the eThekwini municipality alone, with damages in the area put at R15bn.
News
10 months ago