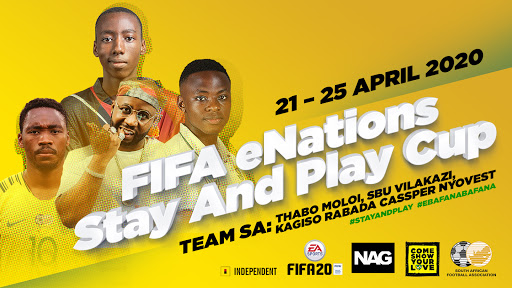 Hosted by Fifa, in collaboration with Inqaku FC and SAFA, the eNations Stay and Play Cup lineup features tea.ms from 40 countries
Image: Supplied

eBafana Bafana began their Fifa eNations Stay n Play Cup campaign with an overall 12–8 win against UAE in a two-legged round 1 match played on Tuesday afternoon.

In a closely contested second leg of round 1, Mamelodi Sundowns and Bafana Bafana star player Sibusiso Vilakazi fell short of his UAE opponent when the game ended 6-4 in favour of the latter.

eBafana Bafana will resume their campaign on Wednesday afternoon when musician Cassper Nyovest and Proteas fast bowler Kagiso Rabada join Thabo Moloi to take on Saudi Arabia and Qatar to conclude round 2 and 3 of the prelims. Kick off is at 5pm and all games will be live streamed on www.twitch.tv/bafanabafana.

This article was brought to you by NAG - NAG features a unique and diverse mix of content that spans games, esports, sci-tech, entertainment, pop culture, bad jokes, and one or two things in between — including daily news, reviews and previews, and videos.

Local celebrities and esports gamers have been invited to participate in Fifa’s inaugural eNations Stay and Play Cup event.
News
1 year ago

Facebook Gaming brings together all the Facebook gaming content you may already be interacting with into one app. You needed another app, right?
News
1 year ago

How do you finish a 20-hour game in under 30 minutes? Ask Xamide, a Latvian speedrun god, who has ripped and teared through Doom Eternal in the time ...
News
1 year ago