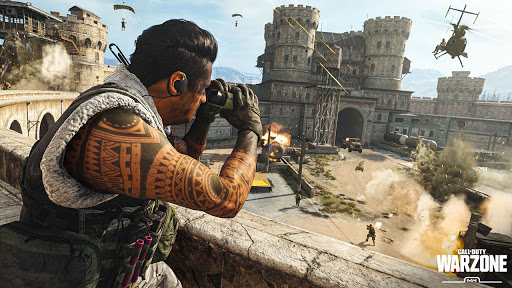 Infinity Ward is putting in additional resources to monitor and identify racism in 'Call of Duty' lobbies.
Image: Supplied

Acknowledging that despite “issuing thousands of daily bans”, Call of Duty lobbies are still hosting too many white supremacists, cringecore it-was-just-a-joke-bros, and that guy who blasts obnoxious music over his mic like it’s 1998 and that’s original, the studio is working to improve in-game content filters and reporting systems.

Since the recent human rights protests started in the US, companies have been scrambling to social media with awkward WE’RE SUPER NOT RACIST brand statements, including multiple game industry publishers, developers  and franchise marketing managers.

I don’t think it’s a controversial claim that military FPS games like Call of Duty comprise a disproportionate percentage of the asshole player demographic compared with, like, The Sims. Maybe it’s the questionable politics and imperialist rhetoric, or, I dunno, the fun-with-guns. Same thing for some people, I guess.

One more obligatory "us too" or an actual, real promise to fix things? It’s hard to tell the difference at the moment.

CD Projekt Red is delaying their Night City Wire livestream event as an expression of solidarity with ongoing protest action in the USA.
News
1 year ago

New seasons of Call of Duty: Modern Warfare, Warzone and Mobile delayed due to unrest in US

In a move to express solidarity with protests raging across the US, the 'Call of Duty' Twitter account announced that the fourth season of 'Modern ...
News
1 year ago

Take-Two may pursue photorealism for some next-gen titles

Take-Two CEO Strauss Zelnick believes the difference between current-gen and next-gen console games will be comparable to the upgrade from Red Dead ...
News
1 year ago

There’s about eight minutes of never-before-seen 'The Last of Us Part II' gameplay in Sony’s latest 'State of Play' episode.
News
1 year ago