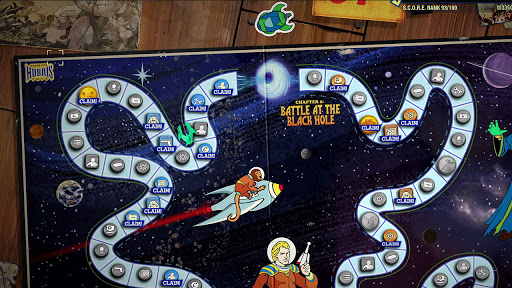 The Legendary Run is Fallout 76's first Season and features a boardgame-inspired theme. As Captain Cosmos, you will race the evil Dr. Zorbo across the galaxy.
Image: Supplied

The Legendary Run is Fallout 76’s board game-inspired first Season, featuring a new progression system, new challenges, and new rewards to earn while you play.

In much the same way seasons and battle passes work in other games, each Season of Fallout 76 comes with 100 ranks to progress through, by earning S.C.O.R.E. through various Daily and Weekly challenges (Lifetime challenges are not affected by the Season) or just by playing the game. Every rank earns you a new reward, including things like Atoms, Perk Card packs, and unique cosmetics. If you don’t feel like going through the effort of playing, you’ll be able to buy ranks, at 150 Atoms per rank, two weeks after the Season starts.

Every 10 Ranks (and whenever Bethesda’s feeling generous) you’ll also earn special rewards like Lunchboxes, Vault-Tec Supply Packages, and Fireworks. Sometimes, you’ll get proper-useful things, like at Rank 5 when you get the Ammo Converter; a terminal that lets you, and your fellow Wastelanders, exchange unwanted ammo for a type you actually need.

Season 1 of Fallout 76 is free for all players and starts with Update 20 on 30 June 2020. The Season will run until the middle of September (about 10 weeks).

This week, I’ve had two new Asus ROG gaming laptops in the work-from-home office for review – the Strix Scar III G732 and the Zephyrus G14.
News
11 months ago

Eager to tap into an exciting new realm of motorsport, Ford SA on Tuesday announced that it is launching a thrilling new virtual championship that ...
Motoring
11 months ago

Desperados III functions as a prequel to the original series so it’s perfect for those who missed out (or weren’t born yet) when the first game was ...
News
11 months ago

The Last of Us 2 picks up the story roughly four years after its predecessor. Ellie and Joel now live alongside Joel's brother, Tommy, in a ...
News
11 months ago