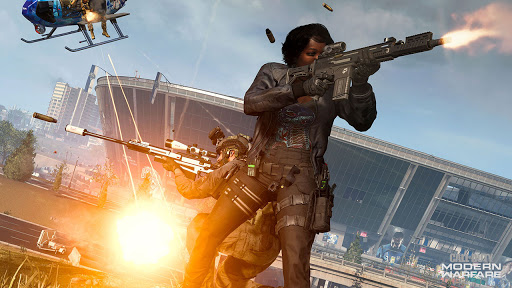 Call of Duty: Warzone is a free-to-play battle royale video game released on March 10, 2020, for Xbox One, PlayStation 4, and Microsoft Windows.
Image: Supplied

By the time you’re reading this, a 36GB+ update should have arrived for Call of Duty: Modern Warfare that, amongst other things, adds limited-time, 200-player Battle Royale Quads to Warzone.

Season Four Reloaded is bringing 200-player Battle Royale Quads matches to Verdansk, upping the player pool by 50 for maximum chaos, but that’s not all. Warzone players will also see the addition of new Supply Run Contracts that, once activated, will have you racing to the Buy Station for some sweet discounts. Then, there’s a new, re-usable, no-glint Spotter Scope up for grabs for all you long-distance legends, and, finally, a Juggernaut Royale mode.

The patch also includes new content for Modern Warfare and a bunch of bug fixes and improvements. You can find the full details in Infinity Ward’s patch notes, over here.

Season Four Reloaded should be available from 08:00 SAST on 30 June 2020. If you’re playing the standalone, free version of Call of Duty: Warzone, the download should be around 30GB. Apparently, the game will take up slightly less space, overall, once the download is complete.

Desperados III functions as a prequel to the original series so it’s perfect for those who missed out (or weren’t born yet) when the first game was ...
News
1 year ago

Never give up. Never surrender. Except when you’re 10 points down and half your team has gone AFK; maybe surrender then. And, if you’re playing ...
News
1 year ago