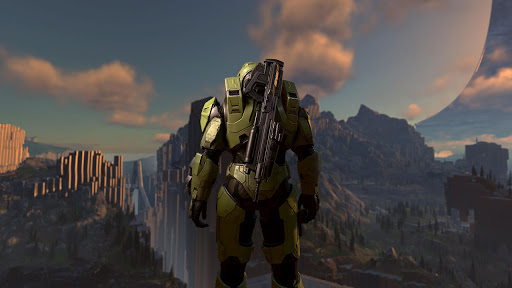 The release of Halo Infinite has been delayed.
Image: Supplied

In about three months' time, you’ll be getting your paws on the Xbox Series X console (assuming that kidney sale went through OK), but the Master Chief won’t be home for Christmas.

According to a recent post on Xbox Wire, the launch of the definitely-not-a-fridge Xbox Series X console is happening in November and there are more than 100 games, old and new, already optimised to make use of some of its fancy next-gen features, like hardware-accelerated Direct X raytracing, 120 fps frame rates, and faster loading times.

And, if you haven’t sold off all your old games to Cash Converters yet, the Series X will also be backwards compatible with a curated list of Xbox, Xbox 360, and Xbox One titles, with older games getting some extra shine for modern audiences. Xbox says:

... optimisations include the ability to render titles with increased resolutions up to 4K, delivering new HDR reconstruction techniques to games that were developed years before HDR came into existence, applying anisotropic filtering to improve image quality, and creating ways to increase or double the frame rate of certain titles.

It’s a good thing you’ll have so many games to occupy yourself with, because 343 Industries also announced that Halo Infinite, previously due to launch in December, has been delayed to an unspecified date in 2021. The delay is due to “development challenges” caused by Covid-related impacts, something that has messed with a lot of release schedules across the gaming industry.

And remember, due to Smart Delivery, that Xbox One version of Cyberpunk 2077, or Assassin’s Creed Valhalla, or whatever you’ve already pre-ordered, will come with a free upgrade to the Xbox Series X version for when your budget eventually has room for the console.

When all hope is lost and humanity’s fate hangs in the balance, the Master Chief is ready to confront the most ruthless foe he’s ever faced.

Call me a shill as I sit on the luxury poop deck of the SS Sell-Out yacht, but there’s a part of me that’s still keen on Diablo Immortal
News
1 year ago

The first rule of Fight Crab is don’t talk about Fight Crab. Except, how could you not? JUST LOOK AT IT.
News
1 year ago

The Xbox Games Showcase kicked off, as expected, with some Halo Infinite gameplay and, yup, it sure looks like Halo.
News
1 year ago