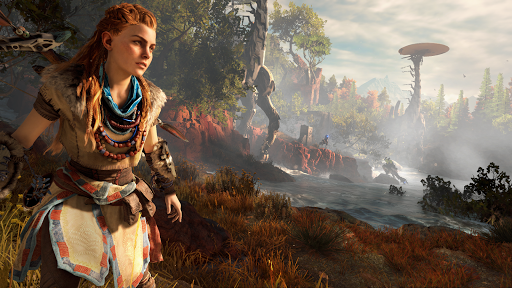 As a PC gamer, I’ve got used to sighing wistfully as console exclusives pass me by. Horizon Zero Dawn was one such exclusive.

Released on PS4 in 2017, it immediately grabbed me with its post-post-apocalyptic setting, intriguing aesthetic, and, of course, the gigantic freakin’ robot dinosaurs roaming the landscape. The gaming gods must have heard my prayers because Horizon Zero Dawn has finally come to PC. Was it worth the wait? Hell yeah! Robot dinosaurs!

Horizon Zero Dawn is set in the far future. Humanity has reverted to living in tribes, hunting and gathering and keeping well away from the ruins of civilisation. Coexisting with the humans are the aforementioned machines, which mimic a wide array of animals, and provide essential resources to the people who hunt them.

You play as Aloy. Born an outcast and raised outside the community, Aloy is eventually accepted by the Nora tribe and granted the title of “Seeker”. This basically gives her free rein to explore the world, even those areas deemed taboo – so it’s a pretty good position for the protagonist of an open world RPG, is what I’m saying. Aloy is voiced by Ashly Burch, whom you may recognise from her brilliant performances as Parvati in The Outer Worlds and Tiny Tina in the Borderlands series.

The PC launch comes at an auspicious time. A recent Bloomberg report revealed that former Ubisoft execs had been fighting against female representation for years, claiming that “women don’t sell games”. With Horizon Zero Dawn selling more than 10 million copies on PS4 and the pre-order topping the Steam best-sellers list, the irony is delicious.

Aloy’s travels will see her stalking through alpine forests, exploring glorious cities baking under the desert sun, and venturing into inhospitable tundra through the included Frozen Wilds DLC. Along the way, she’ll encounter several different tribes, each with their own unique style and traditions. The visual design of the clothing is inspired, feeling both vaguely familiar and alien – furs, leather, and wood are combined with cables, polymer plates, and other scrap in elaborate outfits.

You play as Aloy. Born an outcast and raised outside of the community, Aloy is eventually accepted by the Nora tribe and granted the title of 'Seeker'.
Image: Supplied

Alongside the compelling main quest, you’ll need to hunt both animals and machines, and there are loads of collectibles and side quests on offer. I really enjoyed discovering more of the world, so these never felt like busywork, the way they so often do in open world RPGs.

Hunting machines takes preparation and you’ll need to make use of all the tools and unlockable skills at your disposal, including fire arrows to weaken, shock bombs to stun, the ropecaster to pin down machines, leaving them vulnerable to a melee strike.

Components can also be knocked off machines, removing abilities or dealing huge damage, and you can lay traps, or override machines, turning them into temporary allies or mounts. These fights can quickly turn deadly, leaving you to respawn at the last campsite you rested at, so I found myself approaching them with a healthy amount of trepidation, and when I emerged wounded but triumphant, it felt like I had really earned the victory.

Horizon Zero Dawn is a wholly unique experience in a genre that has been growing very stale over the years.
Image: Supplied

As a game, Horizon Zero Dawn is clearly deserving of the accolades it received on PS4. However, as a console port, there have been a few issues with performance. I experienced crashes when trying to run the game for the first time, and I often experienced slowdowns and stutters while in-game. While they do seem to be widespread, these issues apparently don’t affect everyone, so you may have more luck here. Guerrilla Games did release a substantial day one patch, and hopefully more patches are incoming, but it’s disappointing that the launch hasn’t been smoother, considering how well the game ran three years ago on console.

Issues aside, on PC we get all the usual graphics settings to play around with, as well as an FOV slider and native ultra-wide support, and the game controls beautifully on mouse and keyboard.

Horizon Zero Dawn (PC)
BOTTOM LINE
Horizon Zero Dawn is a wholly unique experience in a genre that has been growing very stale over the years. I thoroughly enjoyed discovering this world and meeting its inhabitants, and even the technical issues I experienced couldn’t keep me from returning again and again. I hope these issues can be ironed out quickly so that this title can receive the love it deserves, because there was clearly a lot of love put into its development.

PROS
An original, well-realised, beautiful open world to explore;
Machines make for exciting, strategic battles;
Side quests and collectibles that don’t feel like a chore;

Skater XL, the first of many games headlining the skatenaissance that’s currently unfolding within the genre, is all about that single trick.
News
1 year ago