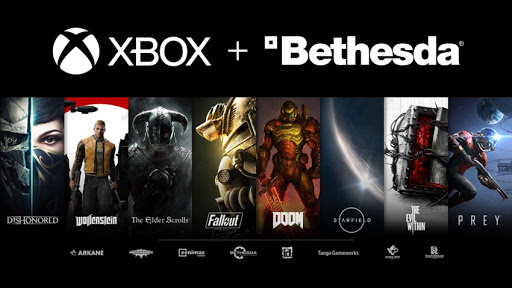 Today’s acquisition though? It might just be the biggest one yet for Team Green, as Bethesda will now be flying the Xbox flag as ZeniMax Media, parent company of Bethesda Softworks, is now part of that gaming family.
Image: Supplied

Microsoft’s been on a tear lately, acquiring studios and building up an army of teams whose sole job it is to develop games for the Xbox brand. Today’s acquisition though? It might just be the biggest one yet for Team Green, as Bethesda will now be flying the Xbox flag as ZeniMax Media, parent company of Bethesda Softworks, is now part of that gaming family.

“We will be adding Bethesda’s iconic franchises to Xbox Game Pass for console and PC. One of the things that has me most excited is seeing the roadmap with Bethesda’s future games, some announced and many unannounced, to Xbox console and PC including Starfield, the highly anticipated, new space epic currently in development by Bethesda Game Studios,” Microsoft said in a statement.

Like us, Bethesda are passionate believers in building a diverse array of creative experiences, in exploring new game franchises, and in telling stories in bold ways. All of their great work will of course continue and grow and we look forward to empowering them with the resources and support of Microsoft to scale their creative visions to more players in new ways for you.

“Like our original partnership, this one is about more than one system or one screen,” Bethesda’s Todd Howard added.

We share a deep belief in the fundamental power of games, in their ability to connect, empower, and bring joy. And a belief we should bring that to everyone – regardless of who you are, where you live, or what you play on. Regardless of the screen size, the controller, or your ability to even use one.

We can’t think of a better group of people to do that with than those at Xbox. We have friendships that go back to those original days. From Phil to his senior leaders to developer support, they don’t just talk about putting players first, they passionately live it.

According to Bloomburg’s Jason Schrier, this deal wasn’t cheap: Microsoft went all in, buying Zenimax for $7.5 billion. Long story short? Microsoft now owns Skyrim, and the next Elder Scrolls game and more will be Xbox exclusives and featured on Xbox Game Pass from day one.