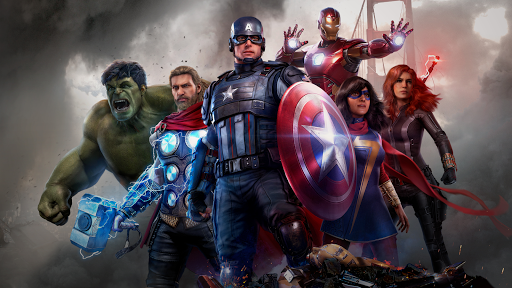 Marvel Comics will always hold a special place in my heart. I grew up on the adventures of Spider-Man, the X-Men, and whatever else my local library had available. Something about these characters living double lives while navigating real world situations appealed to the brown kid who never quite felt like he fit in. Comics were a guilty pleasure back then, a well-kept secret, so you can imagine my surprise – both delight and chagrin – when years later, they’ve become an international phenomenon.

In keeping with the brown kid obsessed with comics, the ostentatiously titled Marvel’s Avengers follows the origins of a superfan named Kamala Khan. A finalist in the world’s mightiest fan-fic competition, Kamala and dad are golden ticket attendees at A-Day, a celebration commemorating a new age in renewable energy, with the Avengers there to cut the ribbon. Her perfect day soon takes a turn when the exhibition becomes ground zero for an international disaster, wiping out San Francisco and causing the deaths of thousands. The Avengers are blamed for everything. Never meet your heroes, kids.

Marvel’s Avengers wastes no time pulling an Endgame, disbanding the Avengers, and time-skipping five years. Instead of a snap and purple testicle, this time it’s Terrigen crystals, and Advanced Idea Mechanics, or AIM for short. Authoritarianism has taken over, and the world is dystopian. Much like real-life, only our supervillains are called billionaires.

A slightly older Kamala, now Inhuman – think X-Men, but not as cool, and even more hated – still believes the Avengers are innocent, and the “A-Day Incident” was a set-up. After finding exactly the evidence she needs, she is forced into hiding, and her mission becomes reassembling the Avengers, and clearing their names. Marvel’s Avengers has the blood, nerve, and grit of a Crystal Dynamics story. It’s got the fearless heroine in Kamala Khan. It’s got the evil shadow corporation in AIM. It’s got the action, characterisation, and storytelling. But just as it starts picking up… 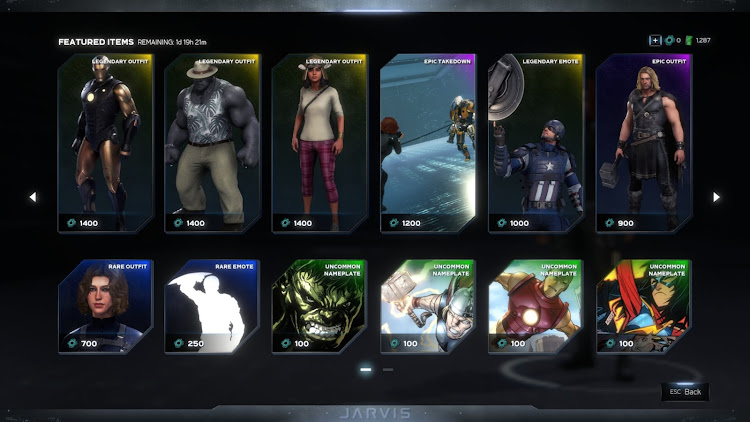 Marvel’s Avengers is a third-person beat-em-up with some platforming sprinkled in for flavour, and more collectibles and loot than you can shake an analogue stick at.
Image: Supplied

… the game stops dead in its tracks to tell you, literally by blocking your campaign progress, that there are cosmetics traders and daily challenge factions in this game! And you should definitely talk to them as much as possible, even if it’s not relevant to the story. Oh, and the game needs to drill this point home, so just in case it’s not abundantly clear the first time, the game will literally halt your campaign progress again to remind you later on.

What, you really thought Marvel’s Avengers, literally the biggest franchise in the world, would be a simple story about a young heroine? Oh no. Oh child. Marvel’s Avengers is an online service game packed with enough grind, bloat, and filler that even seasoned MMORPG players would groan at the prospect of playing it. Sure, there’s a story too. But who cares when it’s barely a quarter of the actual game???

Let’s break it down.

Marvel’s Avengers is a third-person beat-em-up with some platforming sprinkled in for flavour, and more collectibles and loot than you can shake an analogue stick at. Throughout the campaign you’ll get to play a selection of Avengers, each with unique movesets of the typical light, heavy, and power-based varieties. These can be enhanced through basic levelling, skill trees, and power-based gear that improves each character’s stats (sometimes hilariously contrived – you can literally swap out Hulk’s rib-cage). The stats on gear can be upgraded using resources acquired from dismantled gear. You’ll also be frequently reminded if you’ve got stronger unequipped gear. There are cosmetics including outfits, player badges, and takedowns. Each Avenger also has unique character challenges to unlock more cosmetics, gear, and resource packs. If you don’t have the time for all of that then don’t worry because you can just buy them with real money, silly! 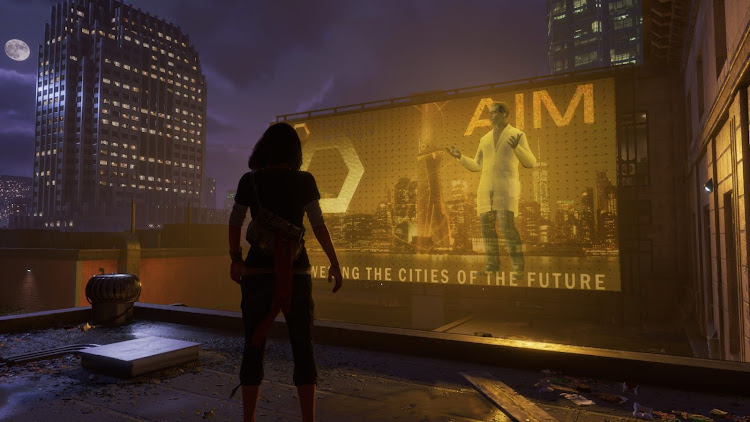 Marvel’s Avengers is a third-person beat-em-up with some platforming sprinkled in for flavour, and more collectibles and loot than you can shake an analogue stick at.
Image: Supplied

The world map consists of combat zones, containing missions ranging from campaign, to character-specific, to faction-specific, and more. Where the core campaign missions involve tight, linear, set-piece-based platforming sections à la Tomb Raider, other missions follow a more generic formula – enter large open area, run towards objective markers, ride an elevator, mash X and Y all the way through until everything has been punched, kicked, or lasered. Return to base, surrounded by traders encouraging you to buy something. Missions can be done solo, or in co-op via drop-in, drop-out matchmaking. If it gets too difficult, you can use boosters to make missions easier. At the end of every mission, you get a rank and some loot.

This, for me, was difficult. I honestly loved the story bits. Never mind the AliExpress Avengers memes, this is an all-star cast doing a stellar job characterising each Avenger. Kamala is a captivating protagonist. There’s a scene early on when she pulls out my favourite Captain America quote, and I just put my controller down like, that’s me. That girl is me. I was enamoured. Then the love slowly faded until the seventeenth time the game asked me to ignore the evil megacorporation and go quickly kill twenty bots, and it would give me a unique armband, and the worst part was the armband wasn’t even as good as the random drop I got from a loot chest during the mission. I wept. 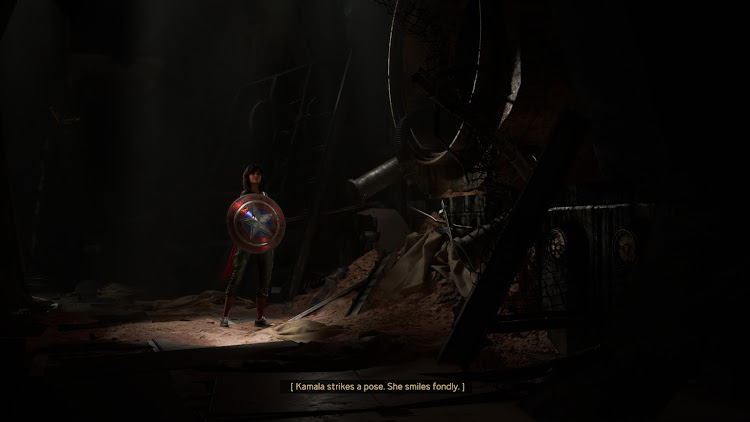 This is an all-star cast doing a stellar job characterising each Avenger. Kamala is a captivating protagonist. There’s a scene early on when she pulls out my favourite Captain America quote, and I just put my controller down like, that’s me.
Image: Supplied

Marvel’s Avengers plays like the dissonant mess you would expect from four development house. Too many hands in the proverbial pot. Crystal Dynamics never seems to escape dissonance in their videogames. Sometimes you get to play Kamala Khan’s exceptional Avengers origin story, other times it’s like playing Square Enix’s version of The Boys, and you’re The Seven [I mean, I’d totally play that – Ed.].

Destiny, but make it superheroes.

It was infuriating, disheartening, and somehow a perfect demonstration of what the Avengers actually are – capitalism’s soulless idealism of superheroes. The elite that, oxymoronically, think they’re doing a public service, when in fact they’re leaving destruction in their wake. Ultron was right, and I stand by that. I love capitalism, but not like this. Give me more Kamala Khan, please. I like Kamala Khan. This online service stuff does not spark joy.

Marvel's Avengers
BOTTOM LINE
Marvel’s Avengers is the perfect superhero metaphor. On the outside, it presents itself as the compelling story of a young heroine’s quest to fight evil, and save the world. Looking a little deeper, you’ll see it’s hiding a secret identity as a total grind-fest that gets old and tiresome way too quickly. Not quite the redemption arc I was hoping for; even if its protagonist gives me hope, there just isn’t enough depth to this origin story.
PROS
Characters and voice cast are stellar
Enthralling story set-pieces
There is some fun to be had here
CONS
But mostly, it’s grind, grind, and more grind
Pointless faction challenges and side quests
Tries way too hard to push loot over story

What a time to release a game about being stuck at home.
News
10 months ago

Many were surprised when Sony let Horizon Zero Dawn out to play with the PC crowd, but it turns out that that was just the beginning of a new ...
News
11 months ago

Toss a coin to yourself in The Witcher: Monster Slayer AR game

Ever wished that rather than simply controlling the Witcher in a game or admiring Henry Cavill’s Geralt of Rivia from afar via the TV screen, that ...
News
11 months ago