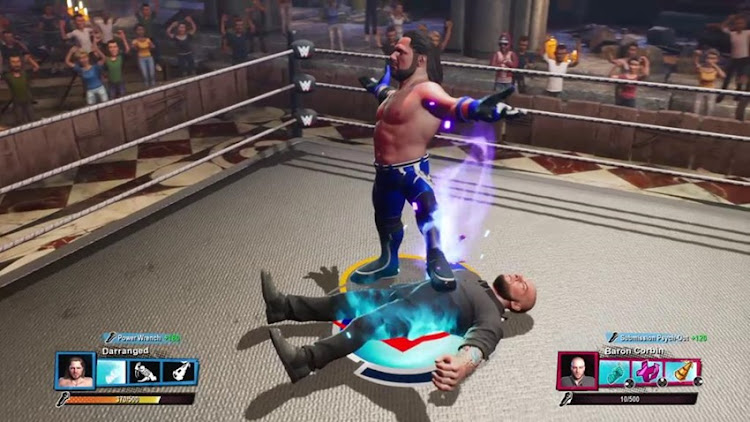 Why do I need to build a character when I can just be me? I’ll tell you why: My son will probably play as me and beat the trash out of me and so I’ll have to make up a character to defeat this dude.
Image: Supplied

The current WWE locker room is full of video game fans, but Styles has them beat with a passion backed up by the mother of all video game collections and the ability to talk about them for hours on end.

Now that WWE 2K Battlegrounds is out, I had the chance to chat to Styles, and while I could have talked about his current feud with Sami Zayn and Jeff Hardy regarding who the true Intercontinental champion is, I thought, stuff it. It was time to talk about video games with the phenomenal one instead.

You’ve been wrestling in real rings and virtual ones all your life, so by now you’ve probably got one of the better opinions on the genre. If I was fresh-faced, curious and wanted to jump into a wrestling video game, where would you recommend I kick off my road to Wrestlemania adventure?

First I’m going to ask you: Are you willing to put in the time to get around the learning curve? What have you played previously? Like 2K and 2K Battlegrounds, it’s going to affect the way you think about wrestling. I was a big No Mercy on the N64 fan, but that’s not how 2K plays at all. You’ve got to get that out of your mind. That’s really hard for me because I love the game, and in Battlegrounds I have to find ways to open it up.

That’s what’s going to work for me, because of the learning curve. I’ve got no real patience as I’ve grown older. That’s why I’m excited about Battlegrounds. It’s a melee game, it’s a fighting game, it’s wrestling. It’s a lot of action, and being a wrestling fan, that’s cool to me. Some guys like the realism, so 2K19 is where you need to go. Because I was on the cover.

WWE 2K20 wasn’t exactly well received last year, and the next entry is taking a gap year so  it can return in 2021 with a more polished product. In that gap, we’ve got WWE 2K Battlegorunds, which is simpler and more cartoonish in nature. In these weird and horrible times we currently live in, do you think a game like WWE 2K Battlegrounds is a breath of fresh air to help prevent annual franchise stagnation?

I think it’s a great idea. If it were up to me, which it’s not, we would put out 2K21 next year, skip 2022, and have Battlegrounds 2 instead. We are well and ready prepared. We are doing the same thing as Activision with Call of Duty. Ee have two different studios for games. They’re swapping that out every year and it keeps things fresh, keeps things different. For me, this is a great idea and I hope they continue.

Do you plan to play as yourself, or are you going to dip into the custom character side of the game and create your own unique superstar?

Why do I need to build a character when I can just be me? I’ll tell you why: My son will probably play as me and beat the trash out of me and  I’ll have to make up a character to defeat this dude. But that’s what’s so cool about it,hat you can do that. It has always been cool, in every 2K game, that you can create anybody. Before I was in the WWE, I was in the 2K games. That’s exciting for kids and adults.

Any tips for playing the game, or are you also entering the ring on day one, like the rest of us?

Good! That’s perfect! That’s the way it should be. I would love to give you some gameplay tips, but the fact is that I haven’t had the opportunity to play it all that much. 2K, you should have let me have it first, I should have been the first one! I’m going to get whupped the first couple of times I play it, for sure.

You’ve got a hell of a video game collection, which Xavier Woods from The New Day recently documented after he paid you a visit. Out of everything you’ve collected, what’s the most valuable game in your library, not on a financial level, but as an emotional investment?

Austin Cree visits the house that AJ Styles bought? Creed checks out The Prince of Phenomenal's insane retro video game collection that extends throughout his entire home! What super rare arcade systems does Styles have stored in his house? Check it out in this special edition of Retro Styles!

It’s probably the most expensive and the one I’m so proud of because I think it’s one of the best games on the Nintendo Entertainment System, which is Mike Tyson’s Punch-Out. It has never been opened, the plastic seal is still on it, and I got a photo signed of Mike Tyson knocking out Little Mac with Mario saying TKO, I got that signed by Tyson. I’ve got the Japanese version of that game, in the box and it has been opened. For me that’s the coolest thing I have in my collection.

When you’re on the road or in the air, traveling from one WWE event to another, do you have a go to console you pack into your luggage? What do you take with you when you need to unwind and play games between shows?

Final question: Xbox Series X and PS5 are launching in November, and while I’m sure you’ll get both consoles, which one are you getting first?

C’mon man! Whichever one I can get first, that’s what it’s coming down to. Preordering both, hopefully I get them both. There are some games coming out for the PS5 that are  really cool. I am an Xbox guy. When I play games, it’s usually on the Xbox. But I’m not counting out PlayStation at all. Spider-Man looks amazing. A  couple of friends are into the Harry Potter that’s coming to the PS5 and I don’t know much of what’s coming out on the Xbox Series X.

I’m kind of a little bit excited for the PS5.

WWE 2K Battlegrounds is out right now. Expect a review on that to hit the ring soon.

Kingdoms of Amalur: Re-Reckoning takes place in a world inhabited by several mortal races and a few immortal ones – the Fae. Where the mortal races, ...
News
8 months ago

Spiritfarer is, as the marketing blurb describes it, “a cozy management game about dying”.
News
8 months ago

The good news is that the next generation of Sony consoles won’t break your budget too much when it arrives on November 19.
News
8 months ago

As part of the PlayStation 5 Showcase livestream event, Call of Duty: Black Ops Cold War showed off some of the first campaign mission “Nowhere Left ...
News
8 months ago