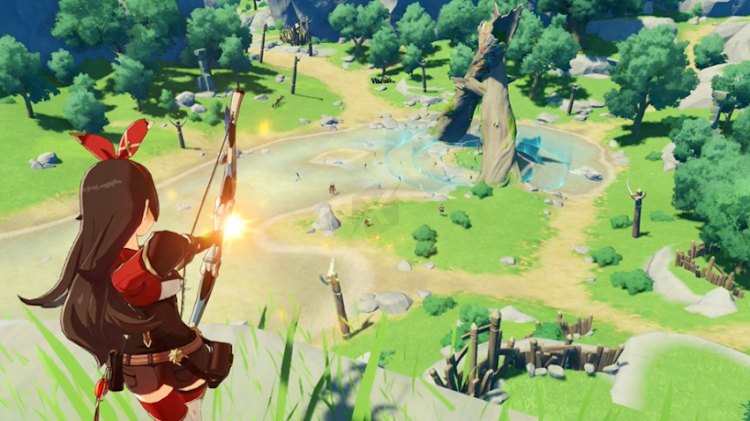 Here’s the general rule of thumb for video game success: if you want your game to succeed, you need to do two things.

The first is to copy the formula that made The Legend of Zelda: Breath of the Wild so compelling and the second is to take that formula and stuff it full of anime girls.

The internet will begin to writhe and froth with anticipation at the prospect of two titans uniting to create one unified vision - and that’s exactly what Genshin Impact did for the world.

Releasing on September 28, the game’s only been out for two weeks and has reportedly done so well that developer miHoYo has already recouped its costs.

Genshin Impact has now grossed over $100m in less than two weeks.

China, Japan, Korea and the US are top markets for the F2P game.

Without a doubt the most successful launch for an original IP from a Chinese dev. https://t.co/WjOOpLa66V

Over the past 12 days, Genshin Impact has reportedly raked in about $100m, which also happens to be roughly the game’s development budget. Which means it’s time for a trip to Profit City for miHoYo!

Genshin Impact has become a bit of a surprise hit in certain countries, with Japan, China, Korea and the US leading the charge. Even here in SA, Darryn won’t shut up about it and I can usually expect at least one message a day telling me to go and play it.

Despite being free-to-play, as it feels most of the world’s most profitable games are, Genshin Impact pulls in cash with a series of gacha-like loot boxes - and we all know that people just adore loot boxes.

Except in the case of Genshin Impact, that’s not even sarcastic as people seem to genuinely not mind the implementation of the system as the actual game is so stuffed with content that spending on microtransactions feels unnecessary.

As Darryn wrote the other week: “It’s an addictive loop of always wanting better stuff, an eternal slot machine where you pray to RNGesus with every pull of the one-armed bandit. You can, of course, drop real currency into the pot to get a collection of wishes and instant gratification and a better chance at five-star drops.
“I do want to support developer miHoYo for their grand effort down the line, but the truth is that they’ve gone and made such a good core game, that I don’t feel tempted yet to indulge in some microtransactions.”

Genshin Impact is out now on PC, PS4, and mobile.

'Destiny 2' has always been a hoot to play, but it’s the drive to earn new Exotic weapons and armour that really keeps players around for the long ...
News
1 year ago

What’s better than listening to music while you complete some mundane, tedious chore? That’s right, actually using that wasted time to grow as a ...
News
1 year ago