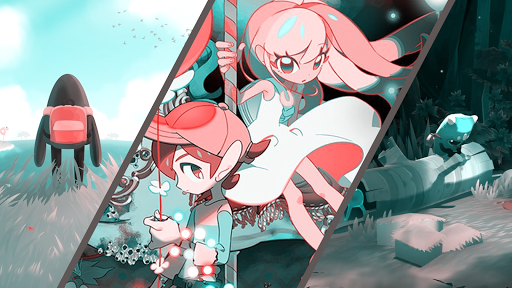 Apple Arcade is a game subscription service unlike any other, with 100+ incredibly fun games designed with the world's most innovative developers.
Image: Supplied

It’s worth keeping the same disclaimer in mind once again — in the interests of fairness to the mobile market, I’ve played each of these games using the touchpad without an external controller. Many Apple Arcade games include controller support, but if you’re like me you probably don’t carry a controller everywhere you go.

If you have an Apple Arcade account, you can play any of these without paying anything extra. 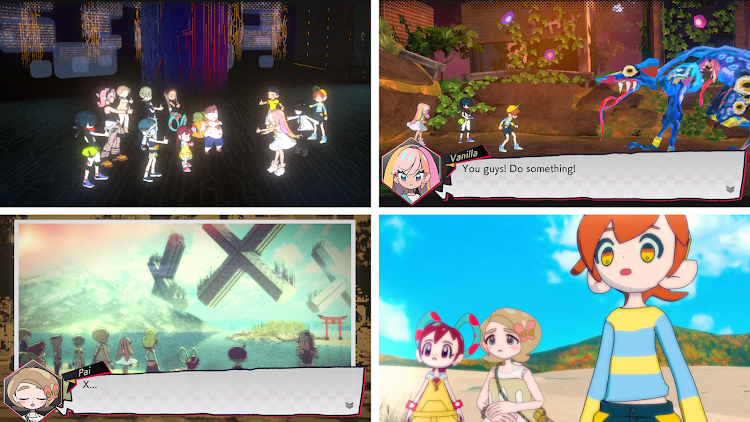 A narrative platformer from some of the minds behind the Danganronpa and Zero Escape games.
Image: Supplied

Do you want a bit of Anime: The Game? Well, this may be just for you then. In World’s End Club you are Reycho, a schoolboy, because of course you are, and you need to go on an adventure with your friends. Where you’ll fight weird creatures (check), learn about the values of friendship (check), and you’ll get some references to baseball (check). If you’re not into anime, then this probably won’t be for you. Fair warning.

So, what is the game itself? It’s a narrative platformer from some of the minds behind the Danganronpa and Zero Escape games. And so you’ll have to control some children who have to go through some traumatic stuff. At first, the game appears to be a very linear deception game where every character is slowly eliminated for various reasons until only you remain. But then you go on an adventure through a post-apocalyptic Japan that features real locations around the country while travelling with a band of similarly aged children who are all very anime-like.

You get to do some basic platforming that involves jumping over some things, running away from some things, chasing some things, and then you’ll be stopped every few seconds for a story segment that takes control away from you. It’s essentially like a 2D visual novel with slightly more control, or a walking simulator with slightly less control. You’re not in this for the challenge, you’re in this to play an anime.

So, if you need to play through the plot of an anime while waiting for your next JRPG to drop, this is worth a shot. It’s pretty long and narrative focused for a mobile game, and so isn’t designed for short commutes or waiting in queues. Treat this one like a regular game and play it on the couch. You also want to treat it that way because the checkpoint system is rather unreliable with where it saves, and so you may find yourself replaying a few minutes of the game every time you play. So, don’t play it for a quick bursts, leave it for longer sessions. 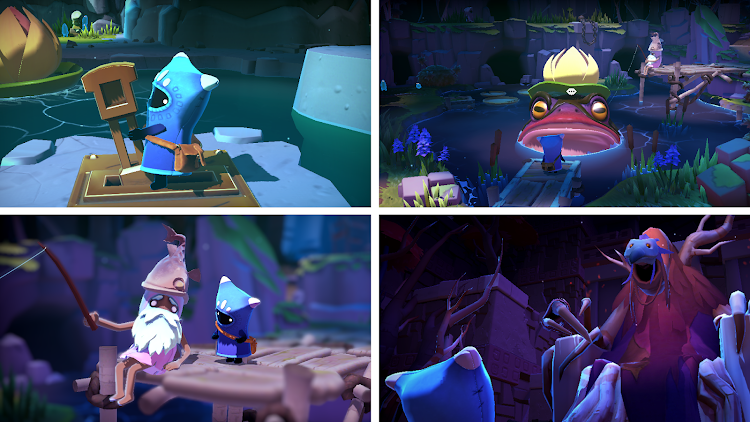 The game itself is from an isometric perspective as you run around this world, solving environmental puzzles so you can find more “Forlorn”, characters who haven’t managed to pass into the next world.
Image: Supplied

A cute little creature in a parka wants to help some other cute creatures in parkas. That’s the plot of The Last Campfire. In it, you’ll take control of Ember, the aforementioned adorable creature, and make your way around a world that is essentially purgatory. Everyone who’s there has become trapped and isn’t able to move on to the next world, and it’s your job to help these little things cross over by going into their minds, solving a puzzle that vaguely has to do with some kind of mental trauma, and then they get up and out of their slump! So, it’s basically a game about accepting death.

The game itself is from an isometric perspective as you run around this world, solving environmental puzzles so you can find more “Forlorn”, characters who haven’t managed to pass into the next world. These Forlorn sometimes help you out with things after you’ve helped them out, like fixing an item for you or transporting you somewhere.

In addition, the map is laid out in a metroidvania-type fashion. As you explore more of the world, you’ll discover new items or shortcuts that allow you to traverse the area more easily. And you get to do all this while listening to a rather delightful, if unnecessary narrator who makes it sound like a fairy tale story. So, if you’re into mostly easy puzzles but a great world with some awesome animation and a cute parka creature then The Last Campfire is worth a shot. 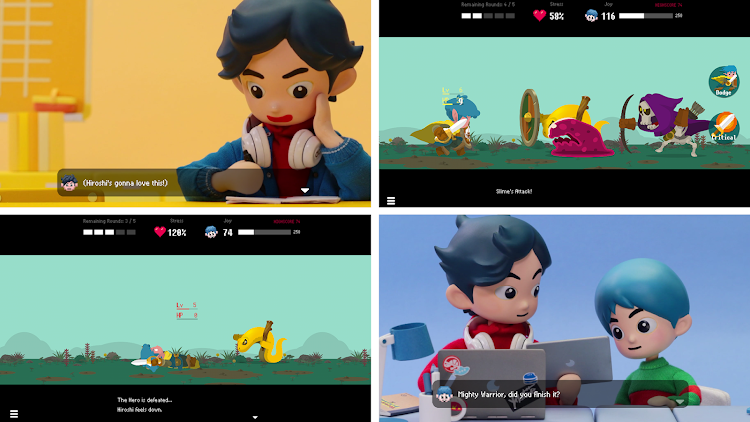 You play as Takeshi, a fourteen-year-old kid who wants to become a game designer one day, and who needs to look after his seven-year-old little brother, Hiroshi.
Image: Supplied

If you want a story that’s more on the heart-warming side of things, then Hiroshi and Takeshi is definitely that. You play as Takeshi, a 14-year-old kid who wants to become a game designer one day, and who needs to look after his seven-year-old little brother, Hiroshi. Their father died and so Takeshi had to take on some more responsibility, and so to keep his brother happy he designs a game for him to play. Only problem — the game he’s making isn’t finished.

Now first off, this is not a realistic depiction of game design, but it’s still sweet so who cares anyway? In the narrative, Takeshi pretends that the game is done, and only allows his young brother to play one level at a time so he can build the game in real-time. This is extremely unrealistic, obviously, but it makes for a unique gameplay experience because you need to keep track of a few things to ensure young Hiroshi is enjoying the game you’ve made.

The game within the game is a side-scroller, turn-based fantasy adventure, but you don’t play as the protagonist. Instead, you decide which monsters to throw in his way. You need to watch Hiroshi’s health, stress, and joy levels, and try to keep them all good and above board. You want to make the fights challenging, but only challenging enough to where Hiroshi can beat them all without having to die over and over again.

You decide which enemies he fights, based on an ever-expanding selection of enemies, and along the way you unlock abilities for your brother to use, such as a dodge and critical attack. You’re pretty much a Dungeon Master. Hiroshi needs to get through a number of rounds with a certain number of points and that’s where the difficulty comes in. It’s all about balance.

Outside of the game within the game, the brotherly narrative is depicted through a series of stop-motion styled animation cut-scenes that are rather adorable. These cut-scenes show the relationship between the brothers, the trouble Takeshi is having at school with a fellow game designer student, and how his brother has to deal with health issues. It’s a delightful little thing and unusual enough to where it really is worth checking out if you want new and different ways of presenting gameplay. 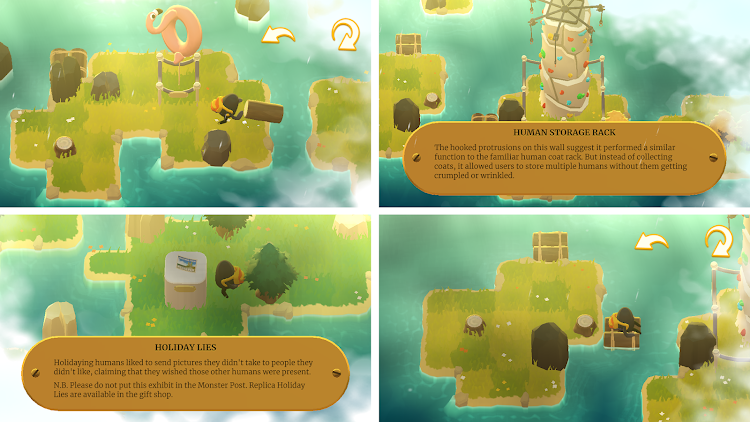 A Monster’s Expedition puts you in the shoes of a monster who goes to visit a museum that is essentially a collection of small islands, all of which have log-based puzzles on them and some of which have exhibitions for you to read about.
Image: Supplied

A Monster’s Expedition puts you in the shoes of a monster who goes to visit a museum that is essentially a collection of small islands, all of which have log-based puzzles on them and some of which have exhibitions for you to read about. The log-based puzzles have you pushing over trees and then rolling or tipping them in certain directions to try to create small bridges between islands so you can find more puzzles and the occasional exhibition.

The exhibitions are cute and contain information about human activities but from an outside perspective, such as an exhibition that finds it odd that human museums are indoor things rather than puzzle-based island adventures, another that questions queue signs and, of course, an exhibition that discusses the notion of lying about what you did on holiday. All of this is presented through small text boxes that you unlock as you discover more of the world.

The puzzles that connect the islands on which you’ll find these exhibitions are not exactly complex. It’ll take you a few moments to figure out how to get a log over to a certain spot so you can move to the next island and you likely won’t get stuck for too long, but the game also has built-in undo and reset buttons for each little island so that’s a nice help.

So, if you want some relaxing time punctuated by brief text box jokes about humanity, give it a look! 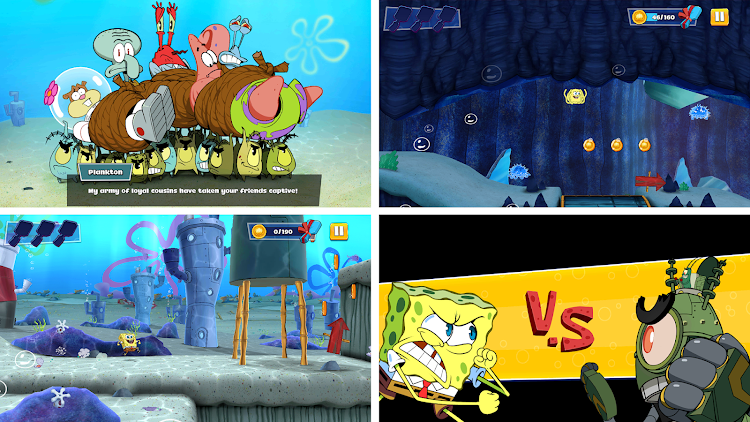 The game is presented as a platformer with persistent running in which you can change the direction, jump over obstacles and enemies, dash into enemies, and occasionally go through a machine that will change you into a jellyfish, or an accordion (which allows you to jump higher), or some other odd transformation.
Image: Supplied

“You’ll never catch me! I went to college!” This is just one of the things Plankton will shout at you as you chase him down in the latest Spongebob Squarepants game, and if that isn’t enough to convince you to check it out then maybe you do need slightly more information. So here we go! Patty Pursuit throws you into the square pants of Spongebob after Plankton steals the Krabby Patty formula yet again, and you need to chase him down and rescue your friends.

The game is presented as a platformer with persistent running in which you can change the direction, jump over obstacles and enemies, dash into enemies, and occasionally go through a machine that will change you into a jellyfish, or an accordion (which allows you to jump higher), or some other odd transformation. You must collect coins and spatulas (because of course that’s a collectible) along the way and at the end of each world you fight a boss, such as the Man Ray or Plankton in a robot.

As you make your way through the game’s worlds, which are all locations from the show like Bikini Bottom and Glove World, you save your friends from Plankton’s clutches and then they can join you in later levels. Unlocking characters gives you special abilities as they run alongside you, such as Squidward using his clarinet to help you or Patrick helping you break things.

In addition, the game offers replayable levels because they cannot be completed 100% without going back with a new friend whose abilities can help you reach some otherwise unavailable place. Which is quite a metroidvania-esque way of approaching it, but it works, and that’s what matters. And if you’re not so much looking for a solid platformer and are more interested in it being a faithful Spongebob game, well it’s got the humour and style down. So, it’s a pretty good one and definitely worth a play.

The Telkom VS Gaming Masters championship 2020 for South African Dota 2 teams finished over the weekend, and we had the opportunity to watch the best ...
News
11 months ago

Next-gen console gaming comes with a big price tag, and hot damn am I willing to pay it just so that I can make old games looks slightly better.
News
11 months ago

There’s been a trend in video game hardware over the last two years that’s easy to sum up: nostalgia, but repackaged in a more compact form.
News
11 months ago