What’s on at rAge Digital Edition 2020 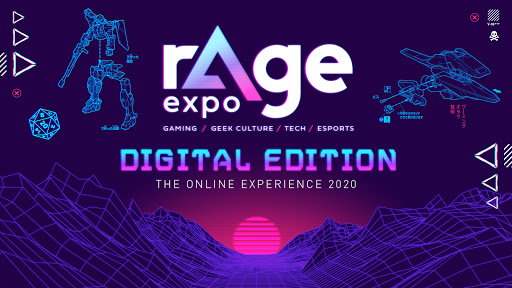 rAge Digital may not be the rAge you’re used to, but with three days of content planned, there is something for everyone.
Image: Supplied

rAge Expo is turning 18. And an entirely new experience is in store for fans this year, as rAge comes to life online. The re-imagined rAge Digital Edition is for everyone – no matter where you are. You can now experience rAge from anywhere in South Africa or the world. And you can book your free ticket now.

DID YOU SAY VIRTUAL COSPLAY?

A Virtual Cosplay Contest is being hosted by GES, with Miguel Lima (6 Ways of the Ninja), Maou Ookami (Maoukami Cosplay) and Cynthia Brown (Sin Bin) judging three categories: Pop Culture, Gaming and Anime/Manga. Judging will take place on Google Teams and the finals will be live streamed on the rAge streaming platforms (YouTube, Twitch and Facebook) on Sunday. Prizes will be awarded for best Solo, Group, Skit, Construction, Representation and finally, Master.

The rAge Streamer Zone is back after its debut at last year’s rAge Expo and will run over the course of the rAge weekend with a diverse line-up of South African streamers participating. And during the month leading up to rAge, ChaniZA, Samplayze, and Haylstorm will be streaming via the rAge Twitch channel.

What’s more, some of SA’s well-known industry personalities will be showcasing video content during the rAge Digital weekend. The line-up includes:

Fans will be challenged to complete 18 “bingo” tasks (to celebrate rAge turning 18 of course!) on the BNG-0 MissionCard™ by rAge Systems, Inc. There are six winners per day so a total of 18 lucky participants can each win a cool prize.

There are also 30 exclusive rAge Loot Boxes up for grabs, so keep an eye on the rAge socials in the next few weeks for more details on where and how you can secure one.

#ESCAPETOPLANETRAGE – WHERE WE’LL ALL CONNECT!

rAge Digital may not be the rAge you’re used to, but with three days of content planned, there is something for everyone. And for the first time, the entire rAge experience is FREE, so book your ticket now.

For more information about rAge Digital Edition, visit the www.rageexpo.co.za.

South African tournament organizer Mettlestate, in partnership with ASUS ROG, has announced an Open and Pro Series for local Apex Legends teams to ...
News
5 months ago

ATK Arena announced the return of the ATK Social events earlier this month.
News
5 months ago