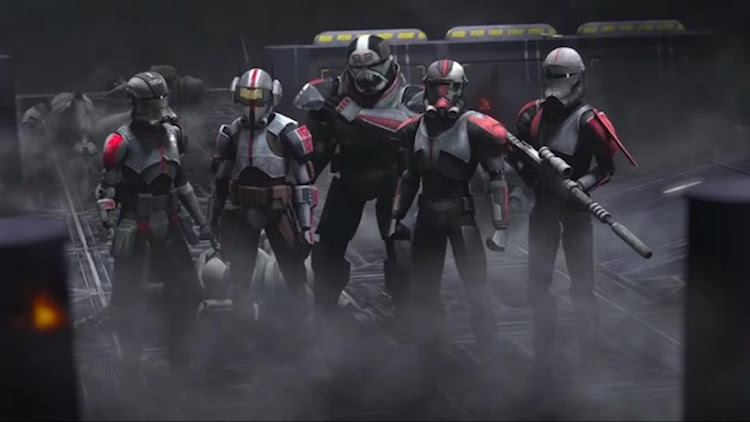 Members of a unique squad of clones find their way in a changing galaxy in the aftermath of the Clone War.
Image: Supplied

The best thing to come out of the latest trilogy of meh Star Wars films has been a reminder that the best of the franchise can be found on TV. The Mandalorian has been a huge hit thanks to weaponised Grogu cuteness, the Clone Wars got the finale that it deserved, and Star Wars Rebels is four seasons of excellent storytelling in a galaxy far, far away.

With a pile of dead Jedi, an asthmatic cyborg enforcer of a new regime, and a Sith Lord who looks like he should have been named Darth Scrotum, the Clone Wars are pretty much done and dusted…right? Not exactly, because one special forces group of misfit clones finds itself adapting to the new status quo of the Galactic Empire. An empire that’s not exactly keen to have the Bad Batch running around doing dirty jobs as it keeps an iron grip on the galaxy.

In case you missed them the first time, the Bad Batch aka Clone Force 99 were introduced in The Clone Wars series as a group of less than perfect clonetroopers who were regularly sent behind enemy lines to sabotage the enemy. Dee Bradley Baker pulled several overtimes on this gang, voicing Rambo cosplayer and leader Hunter, surly sniper Crosshair, the hulked out Wrecker, and big thinker Tech.

Former Clonetrooper Echo would also join the squad, finding that he had more in common with his defective clone-brothers after being held prisoner and gruesomely experimented on by the Techno Union. Which totally isn’t the name of my House Music DJ act.

There’s more than a few other familiar faces present in the trailer above, as Galactic Empire big cheese commodore 64 military dude Tarkin wants the gang dead, Captain Rex is still on the loose, and I’m pretty certain I caught a glimpse of Saw Gerrera there. That could be a perfect partnership in the making: A squad of experienced black ops soldiers, teaming up with a homicidal rebel madman. Ming-Na Wen’s bounty hunter Fennec Shand is also present, long before she started popping up in The Mandalorian.

Beyond that, it looks like the gang even has a new recruit as they go on the run. Star Wars: The Bad Batch arrives on Disney+ on May 4 with a huge-ass 70-minute episode, with new episodes arriving weekly from May 7.

New Returnal trailer teases the mystery of the White Shadow

While the edge of tomorrow beckons, it’ll be up to you to use a new set of skills within the roguelike action game to move a step forward while ...
News
1 year ago

Everywhere is basically OASIS from Ready Player One

All we have, so far, is a website and a couple of interviews to go on, but Everywhere already has a solid fan-following.
News
1 year ago

We’re all waiting for Diablo IV, but why not pass the time with some old school fun, remastered for 21st century eyes?
News
1 year ago

Oddworld: Soulstorm is coming to PC (via EGS) and PlayStation some time around May/June.
News
1 year ago