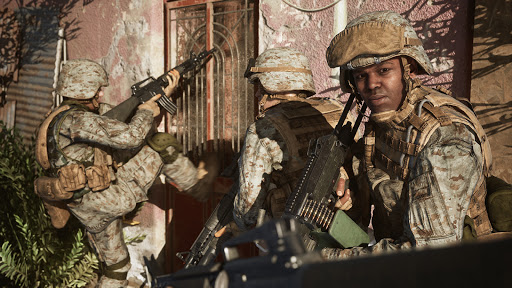 First announced in 2009, subsequently cancelled or not cancelled, it depends who you ask but it’s mostly irrelevant now, anyway, because it was re-announced in 2021, Six Days in Fallujah is a controversial game. Let’s discuss.

The game is based on the actual events (maybe, but I’ll get back to that in a moment) in 2004 of the Second Battle of Fallujah, code-named “Operation Phantom Fury”, as described in interviews with developer Atomic Games by “over 70” US Marines and other military officials, and Iraqi soldiers and civilians. The premise itself was inevitably controversial, because so was the entire Iraq War, but also because so was Operation Phantom Fury – this time, because the US military was accused of using white phosphorous, a chemical weapon, against civilians. Much like the game’s status from 2009 until now, however, it depends who you ask.

The US military is permitted to use this in certain, specific circumstances but not against civilians, and the UK military is not permitted to use it against civilians or enemy combatants for any reason, ever, or even be involved in a conflict that uses it. Operation Phantom Fury included US and UK military personnel, so that’s awkward. Also, probably a war crime. The US military denied that it used white phosphorous against civilians, obviously, but confirmed that it was used against enemy combatants, because apparently it’s super easy to tell the difference.

Original publisher Konami dumped it almost immediately in response to criticism from UK veterans and the Stop the War Coalition, and having failed to shop the project out to other publishers, Atomic Games went bankrupt in 2011. By most accounts, the game was cancelled. But unlike the estimated 800 or so men, women, and kids who were killed during Operation Phantom Fury, whether by bad white phosphorous or totally legal freedom bullets, Six Days in Fallujah wouldn’t die.

Studio boss Peter Tamte opened his new company Victura in 2016, and signed up Highwire Games as the new developer. The game is expected to launch this holiday season.

THE PROBLEM WITH HISTORY

It depends who you ask, but we’re reminded that “history is written by the victors” so often, it’s become an almost meaningless cliché, the obligatory disclaimer to be ignored in service of  DEMOCRACY, McDonald’s franchise expansion, and corporate marketing budgets. And games aren’t exempt from this kind of bias, from convenient omission of context to grossly disingenuous revisionism and political propaganda. Mostly, it’s in between.

Or so what, it’s just a movie. I recently watched U-571, a 2000 movie starring Matthew McConaughey and Harvey Keitel about the very heroic patriots of the US Navy submarine crew who captured the first Enigma machine from a German submarine in 1943, one of the most consequential intel acquisitions of World War II. The movie is presented as based on actual events, but it’s not. The first Enigma machine was captured in 1941 by the Royal Navy’s HMS Bulldog, before the US even joined the war, and by the time of the movie’s “actual events”, cryptographers at Bletchley Park in England had busted the code. The US Navy didn’t even capture an Enigma machine until 1944. By the end of the war, the Royal Navy had captured thirteen, the US Navy had captured one. You wouldn’t know that watching this movie, though.

So what? This isn’t the news at 10, and besides, that’s not exempt from bias either. If we assume it’s based on actual events, that’s on you and me.

And don’t get me wrong, it is on you and me. The writers of games, movies, TV shows, books, and those racist conspiracy theory memes copy-pasted from Facebook that grampy sends on WhatsApp have zero responsibility to tell the facts. It’s up to us to work out what’s what.

THE PROBLEM WITH BIAS

You’re biased. I’m biased. This article is biased. Everybody and everything is biased. It’s not a moral failure, it’s basic Intro To, Like, Reality 101. Recognising bias? That’s much more complicated, because bias can be conspicuous, subtle, or ambiguous. Remember this.

According to the Six Days in Fallujah website, the game “recreates true stories of Marines, Soldiers, and Iraqi civilians during the toughest urban battle since 1968″. Emphasis is mine, but remember this too.

“I have two concerns with including phosphorus as a weapon [in the game],” Peter Tamte explained to Polygon in February. “Number one is that it’s not a part of the stories that these guys told us, so I don’t have an authentic, factual basis on which to tell that. That’s most important.”

Ostensibly, going on what you’re told isn’t necessarily a bad thing – but the actual events that this game is based on are disputed, so its narrative credibility is inherently questionable. That’s bias, and it necessarily precludes the claims of the game’s “authentic, factual basis”. Unless you ask Peter Tamte.

“Number two is, I don’t want sensational types of things to distract from the parts of that experience.”

I mean, that’s definitely a… perspective. The US military’s alleged use of white phosphorous was the biggest controversy about Operation Phantom Fury, but okay, whatever. Reducing it to a cheap, tabloid-level insignificance is the game writer’s prerogative.

THE PROBLEM WITH SIX DAYS IN FALLUJAH

For some people, perhaps, it’s just a game. For others, it’s 100,000 total civilians killed and millions more evacuated from their homes, it’s the sanitising of incomprehensible human misery for the 16-25 consumer demographic, it’s one more atrocity dressed up as fun.

That’s the idea behind Gord from developer Covenant. Dev. A single-player adventure and strategy game, players will have complete quests and manage a ...
News
1 week ago

Cape Town studio The Brotherhood is prepping its post-apocalyptic retro-futuristic Afropunk-’em-up for launch on PS4 and Switch.
News
2 weeks ago

With all hands on deck currently to fix the current mess that CDPR’s leadership pushed out, the big boss of the studio is still optimistic that ...
News
2 weeks ago
Next Article