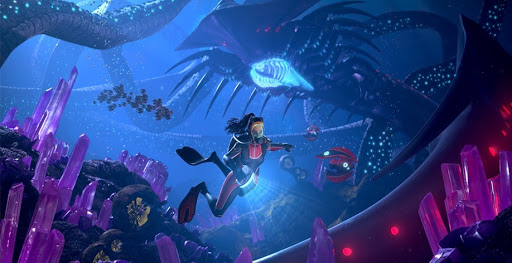 There’s a funny thing that happens while playing a survival game, and I believe this stands true for a variety of different sources: Every survival game starts off scary or at the very least tense. There’s always a constant pressure to eat, hydrate, set up a shelter, or rest amongst myriad other factors that need to be accounted for, depending on the difficulty of the game. Back in 2018, when Subnautica first launched out of early access, I think what made it special was that the threshold of safety never arrived. The ocean, no matter how prepared you were, always felt like a treat.

While you could cruise around in a submarine, you know that there was something much bigger than you trawling through the depths for prey. The only true place of safety was on the surface. So of course Subnautica: Below Zero, the standalone expansion to the original game, takes even that small sanctuary away from you. In the process, it delivers a game that it’s as good if not slightly better than it’s predecessor while still occasionally suffering from some problems that should have been solved.

The most noticeable difference is the front-loaded narrative of Below Zero. The original Subnautica set itself apart from the competition by not only having a (fairly competent) story but a definitive completion point, something many survival games avoid to ensure they rope players in for as long as possible. Below Zero goes in hard on the narrative and it actually works rather well.

You’re no longer a silent protagonist who’s crash-landed on the island, you’re Robin who won’t hesitate to offer her thoughts on the events unfolding around her as she searches for her sister, Sam. The shift to a more… present character-focused story was unexpected, especially when you realise that Robin isn’t the only person strutting about the frozen tundra of Planet 4546B, but I won’t get into those spoilery details. If you’re a fan of audio log storytelling, that’s all present and accounted for, don’t you worry. Each of the characters has a distinct personality and certainly stands out as actual characters in comparison to the first game. It’s a decent little story that sometimes drops the pacing (expected for a survival game with so much downtime) but I’ll admit that the addition of a voice made me feel less… isolated. That may make the game appealing for some, but for me, I liked the feeling of being completely by myself with a character chatting about what a Sea Monkey stole off them.

Speaking of which, the real stars of Subnautica continue to be the fauna that populate the icy waters of the planet. Fans of the first game will see some essential creatures while other, more iconic animals have been given a slight redesign. The Arctic Peeper, Crashfish, Boomerang and Bladderfish will all look familiar but the new creatures are the real stars. Seeing Penwings and Penlings (which must have been named after Benedict Cumberbatch) darting in out of the water, catching fish to feed to youngsters never grows old while the deeper you go the likely to come across things like Squidsharks, Cryptosuchus and if you’re unlucky, an Ice Worm. Each creature is beautiful in it’s logical design that prods players to investigate but to also be wary when first encountering something. That’s the balance Subnautica has always been so good at keeping: Prompting curiosity while never outwardly encouraging your safety.

You’ll also be spending more time on land in Below Zero, which makes for a decent change of pace when 85% of the game is underwater. In the original game, the land was treated as a haven, a refuge from the horrors of the ocean. Not so in Below Zero, you’re in a tundra, remember? Outside of the water, your body temperature becomes your main concern as you scavenge in abandoned bases and avoid the creatively named Snow Stalkers.

Considering you’ll be spending more time out of the ocean, it’s a good thing developer Unknown Worlds improved on the movement of the game. Controlling the character of Subnautica on land never felt good, like you were gliding across vast swathes of ice. Now, it still feels a little like that but at least it makes sense right? It also just looks better. While underwater is still visually gorgeous from a purely technical level, making your first landfall always felt disappointing as you were warped back to PS2 era graphics. I don’t know if it’s just because everything is covered in a layer of snow, but it certainly makes it all feel more… modern. A significant improvement over the last game, if nothing else.

Put it this way, if you enjoyed the original game, you’ll love Subnautica: Below Zero. It adds onto the everything that came before it in often meaningful ways and streamlines the experience to feel less daunting and clunky for new players. The ability to pin recipes to your HUD is an absolute god send and the extra tools afforded to the player remove some of the more dreary elements of setting up a base and building vehicles. I will say that the issue of storage is still a problem; the mechanic often used in survival games that force players to store items in trunks with limited space sucks. It equates challenge to tedium as you’re forced to scour through menu after menu just to find a single chunk of Lithium. There are options to better organise your storage, like the new Quantum Locker, but this still remains one of Subnautica’s most irritating features.

Beyond that, Below Zero is an excellent survival game and a worthy successor to one of the best games of 2018. It serves its role as an expansion with aplomb and adds as much as it fixes with the original game. If you’re looking for more Subnautica or just feel like a survival game that’s actually unsettling in its design, you needn’t look further.

Subnautica: Below Zero presents the player not only with a harsh tundra to live in but the icy depths underneath it all. It’s tense, challenging, and always engaging, pushed on by a surprisingly in-depth narrative and characters that make eventually leaving behind all those magnificent alien animals all the more challenging when you eventually roll credits – 8.5

While we are all patiently awaiting the reveal of a huge Warzone tournament ACGL has been teasing on social media (to be announced this Tuesday) ...
News
3 weeks ago

A complete visual refresh of the original game, the mechanics still hold up while maintaining its gorgeous visual standard. Crysis Remastered is now ...
News
3 weeks ago

There's a lot going on over at South African tournament organizer Mettlestate from the Soccer Laduma League to the ROG Invitational III tournament, ...
News
3 weeks ago