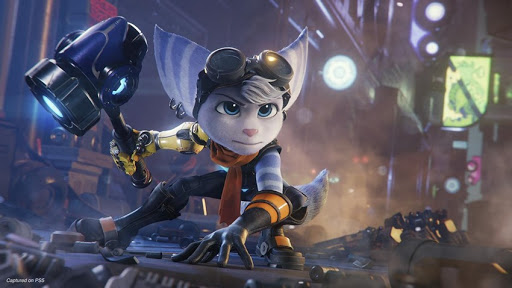 June’s just around the corner, and in a month which includes a few heavyweight releases such as Scarlet Nexus, Necromunda: Hired Gun, and a chonky Final Fantasy VII upgrade, Ratchet & Clank: Rift Apart may be the biggest game of the lot. Quite possibly the biggest and most important game for the PS5, Ratchet & Clank’s latest adventure looks to be shaping up nicely so far.

Never played a Ratchet & Clank game? Need a recap delivered by the manic energy of Invader Zim’s voice actor Richard Horvitz? Well good news chums! Here’s the latest story trailer for the game, which details Dr Nefarious ripping reality apart with the use of the Dimensionator, Ratchet’s dimensional counterpart Rivet, and an odyssey across time and space to sabe the day. Y’know, the usual world-building stuff about portals in the sky.

Developer Insomniac also released a list of accessibility settings, which should make the game easy to pick up and customise. According to Insomniac, you’ll have the regular difficulty options, auto-aim, and movement accessibility that include auto gliding and Hoverboot auto-pump. For players wanting to fine-tune the visual side of the game, you can enable a high contrast background to help with visual identification, toggle HDR settings, and even render enemies as a single colour block to more easily identify them should you have certain visual impairments. That’s quite neat!

There’s even full controller remapping available, the ability to create macros of a sort such as chaining a full combo to a single button, and Sony’s trademark first-party photo mode. That’s a staggering amount of customisation to play around with ahead of the game’s launch date of June 11. Sony’s only had a handful of first-party games released for the PS5 since it launched in November last year, but so far the company has been hitting sixes all the way.

Mettlestate has announced the Garena Free Fire Super Cup which takes place this coming weekend and has a prize pool of R5,000 to fight for.
News
8 months ago

Erica Review – Interactive movies come into their own

You can still tell a good interactive film from a poor one, though, and mystery-thriller Erica belongs unquestionably in the former category as one ...
News
8 months ago

While we are all patiently awaiting the reveal of a huge Warzone tournament ACGL has been teasing on social media (to be announced this Tuesday) ...
News
8 months ago

According to a recent earnings call by Embracer Group, who owns Valheim developer Coffee Stain, the game has sold 6.8 million copies since it ...
News
8 months ago