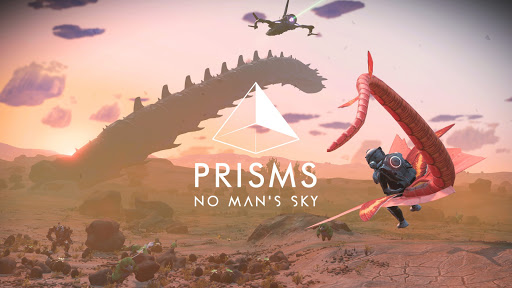 No Man's Sky is a survival game developed and published by Hello Games. It was released worldwide for the PlayStation 4 and Microsoft Windows in August 2016
Image: Supplied

Hello Games has warped its new free Prisms content update into galactic orbit, including a total visual revamp of the game and the debut of new “trusty airborne steeds”.

“Virtually no part of the game has been left untouched – our small team have enhanced the technology and the art all across the game to make the entire universe more vivid and beautiful than ever,” studio boss Sean Murray explains on the No Man’s Sky website. “Planets, skies, stars, creatures, the weather, space stationers and more – new technology and new art mean they look the best they’ve ever been.”

Besides the extensive visual improvements, though, the update also adds exotic new floaty bois like “giant beetles, flying worms and colossal butterflies” that players can adopt as pets.

“This is something which has been requested ever since Travellers mounted their first creature in the Beyond update and we can’t wait for you to take to the skies with your trusty airborne steeds.”

Battlefield 6, the game that’s had it’s trailer leaked so many times you’d think Tom Holland was running the development team, will be officially ...
News
4 months ago

Two Goliath Gaming FIFA players became the first esports athletes to make the Forbes Africa 30 Under 30 Class of 2021 list. The pair are also among ...
News
4 months ago

First look at Horizon Forbidden West gameplay on the PS5

Sony’s latest State of Play featured almost 14 minutes of Horizon Forbidden West gameplay, captured in all its shiny glory on the PlayStation 5.
News
4 months ago

Seems Sony is so excited to be bringing Uncharted 4: A Thief’s End to PC that they leaked it in an investor relations slide show before an official ...
News
4 months ago