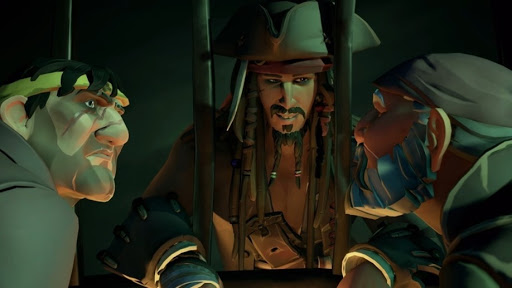 Sea of Thieves is a first-person multiplayer action-adventure game in which players cooperate with each other to explore an open world via a pirate ship.
Image: Supplied

While it might not have been as high on everyone else’s radar during the Microsoft/Bethesda Games E3 2021 showcase, Sea of Thieves’ crossover with Disney’s Pirates of the Caribbean really perked my ears up. While I’ll be the first to admit that last two entries in that franchise, I stand by that the original trilogy is some damn good swashbuckling action with some wildly impressive choreography and special effects. Thus, the chance to replicate that in Rare’s Sea of Thieves… well, I’m tempted to dive into GamePass and give it a redownload.

The new gameplay trailer for Sea of Thieves Season 3: A Pirate’s Life highlights more what players will be doing, as the iconic Captain Jack Sparrow provides guidelines on how to defeat the evil Davy Jones, who’s seemingly trying to take over the high seas. The trailer teases new locations for players to explore, new enemies seemingly based on the crew of The Flying Dutchman (although that guy with the hermit crab head is sadly not present), and new cosmetics. These include an outfit that resembles Captain Jack himself, a skin for players’ ships that resembles The Black Pearl, and even the return of Prison Dog as a companion. I’m not sure if Prison Dog was ever given an actual name, but it’s the dog that brings guards Jack’s cell in the film. He’s a really good boy!

Get a look at the new locations, cosmetics, and enemies coming to Sea of Thieves in the Pirates of the Carribean update, A Pirate's Life.

Speaking to the update, Sea of Thieves’ executive producer Joe Neate said, “We’ve worked closely with the Walt Disney Games team throughout this whole process, crafting an original story which brings out the best elements of both Sea of Thieves and their beloved Pirates of the Caribbean franchise.” Fans can get a taste of what pirate-like adventures await them in A Pirate’s Life when the season launches on June 22.

More than six months since scrubbing the game from its online shop, Sony has decided to reinstate Cyberpunk 2077 on the PlayStation Store but ...
News
1 year ago

This weekend, on Saturday, 19 June 2021, there will be a Fortnite Minor League Cup taking place, featuring gaming hardware as prizes. Here's what you ...
News
1 year ago

In this week’s edition of It’s Time To Upgrade Now, You Guys, But For Real, Rockstar has confirmed that multiplayer services for the Xbox 360 and PS3 ...
News
1 year ago

Elden Ring is a real game, you guys

Since the game’s announcement at E3 2019, From Software’s Dark Souls-but-with-ponies has been a conspicuous no-show at every subsequent games event – ...
News
1 year ago