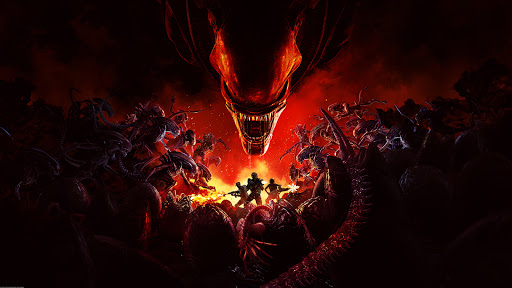 Cold Iron Studios has dropped a new trailer for its bug hunt-’em-up, featuring some of the game’s hot Colonial Marine on Xenomorph action.

Mashing up Left 4 Dead and Gears of War’s Horde mode, Aliens: Fireteam Elite is a class-based, third-person tactical blast-o-rama with co-op support for up to three players.

"Face off against waves of terrifying Xenomorph and Weyland-Yutani Synthetic foes alongside two players or AI teammates, as you and your fireteam desperately fight your way through four unique campaigns that introduce new storylines to the Alien universe. Create and customise your own Colonial Marine, choosing from an extensive variety of classes, weapons, gear, and perks, battling overwhelming odds in this heart-pounding survival shooter experience."

"Play a pivotal role in the epic events that occur 23 years after the original Alien trilogy as a Colonial Marine stationed aboard the UAS Endeavor, battling terrifying Xenomorph threats. Stunning visuals, iconic enemies, realistic environments, powerful weapons, futuristic equipment, and an eerie soundscape, combined with new storylines in a series of replayable campaigns, expand upon the story from the blockbuster films."

Aliens: Fireteam Elite busts out on PC and consoles on 28 August, but you can pre-order now for some bonus extra custom cosmetics including a that’s-so-Vasquez-lol bandana and a chestburster emote.

EA’s Motive Studios is working on a project based on “an established IP”, with an announcement expected at the publisher’s Play event next month. ...
News
2 months ago

EA has debuted its next Battlefield game, featuring wingsuits, weather hazards, and 128-player mega-maps – but, for the first time since 2009’s ...
News
3 months ago

Goliath Gaming's Julio "Beast" Bianchi has managed to qualify for the FIFAe World Cup 2021 scheduled to take place in London from 6 to 8 August 2021!
News
3 months ago

More than six months since scrubbing the game from its online shop, Sony has decided to reinstate Cyberpunk 2077 on the PlayStation Store but ...
News
2 months ago