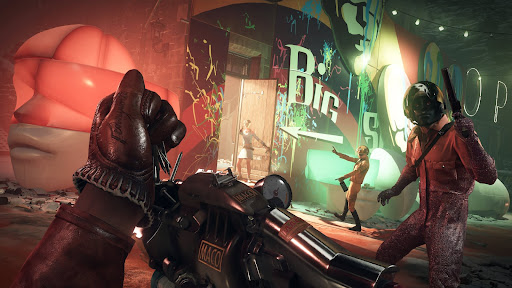 DeathLoop is the exception to that rule until you realise that firepower and accuracy are the least demanding parts of the experience.
Image: Supplied

Has there ever been an actual ‘Groundhog Day’ game before Deathloop? The former refers to the 1993 comedy starring Bill Murray, in which he plays a misanthropic weatherman who has to repeat the same day over and over perpetually. Though Groundhog Day was not the first movie to explicitly focus on a closed time loop, it did it the best and cemented the genre.

Some games let you manipulate time differently (Prince of Persia: Sands of Time probably being the best of them). Honing in specifically on time-loop games, enough were made to justify a Wikipedia category.

But I’d wager you’ve never heard of most of those titles. And though I haven’t played many of them, I wager none hold a candle to Deathloop.

You play an assassin who keeps repeating the same day on an island. You break the loop by killing eight specific targets within the day. But since they are spread across different zones (which are influenced by four-time periods – morning, noon, evening and night), you can’t just make a quick run of it.

In Groundhog Day, Bill Murray starts taking advantage of his situation by learning the repeating patterns. He starts to know what will happen when. Ditto in DeathLoop – you eventually figure out the patterns of the world, then manipulate them to get your targets closer together. To do this, like Bill, you have to repeat the day over and over again.

A new high watermark for Arkane and developers of similar games to aspire to, Deathloop is a game like no other. Here's our Deathloop review, covering Deathloop's single player and PvP modes.

It’s brilliantly done, but the mechanism also makes DeathLoop deceiving. This game is not a first-person shooter. If your idea of FPS is running in guns blazing, popping headshots while bunnyhopping like a bouncing ball in a centrifuge, DeathLoop will bore you. The enemies and scenarios are too simplistic. But if you prefer a more cerebral adventure – if you’re more about Portal than Battlefield, but you long for a little more sandboxing and gunplay – then DeathLoop is your game. Clever level design and optional quests to unlock advantages provide depth in what should be a wash-rinse-repeat experience.

With DeathLoop, Arkane Studios have done it again. This group of developers consistently challenge the first-person shooter genre with new ideas. Their first two games Arx Fatalis and Dark Messiah of Might and Magic were, in my opinion, the wells that Morrowind and Skyrim drank from.

While we were all dodging each other in Counter-Strike and Battlefield 1942, these guys asked: what if a first-person shooter can involve swords and shields, gestures to create spells, or just let you throw random objects at your adversaries?

Cerebral first-person shooters apply most commonly to Half-Life, and other early examples include the original Deus Ex, System Shock, and the Ultima Underworld games. I’ll also count Anachronox because, even though it was third-person, it came straight out of FPS royalty as one of the two games from Ion Storm (the other being the disastrous Daikatana.)

System Shock, though, is the genre’s godfather. It brought thinking FPS games into the mainstream and lived on through Bioshock (Arkane developed the Bioshock sequel). Dead Space was destined to be another System Shock, but then the developers played Resident Evil 4. That being said, System Shock was also a survival horror and predated the original Resident Evil by two years.

I thought I’d throw that in there to annoy RE fans. I don’t care much for RE. I’m more Team Silent Hill. Anyway, in cerebral FPS games, accuracy and firepower are not the only means at your disposal. At its peak, this sub-genre casts you as the opposite of a Doom ubermensch. In games such as Bioshock and Dead Space, you are frequently outmatched. At the far end of the spectrum, you can even play games where combat is a last resort or not available, such as Penumbra, Amnesia or the We Were Here series of games.

DeathLoop is the exception to that rule until you realise that firepower and accuracy are the least demanding parts of the experience. You’re a talented killer, but you need to rearrange the chessboard in a day if you hope to win. That, and the enemies quickly mob you when things go pair-shaped.

DeathLoop may look like a blue blood FPS, but it belongs in the thick of the cerebral pack. Look closely, and you can see Arkane’s two-plus decades of cumulative experience. Yet it’s still fresh. In a world where we salivate over Battlefield XIV at the ThunderDome, where most shooters are just shells for multiplayer grinding, DeathLoop is a masterpiece.

But I confess, I didn’t get into the game. I don’t care much for speedruns or roguelikes, two concepts that count among DeathLoop’s gameplay parents. But if the idea of a speedrun roguelike time loop cerebral FPS sounds intriguing, then Deathloop is your game.

Is it worth the price tag? Another confession – I did not finish DeathLoop. Apparently, Bill Murray’s character spent 10,000 years looping in that movie. While I’m certain DeathLoop is shorter than that, it’s a time investment – around 20 hours, says Google. And it has optional missions and areas to unlock, adding to the gameplay investment.

If repeatedly exploring the same world (though with plenty of variety in terms of time and location), failing a lot, losing (almost) everything every time, and going back for more because it’s awesome, and you’re one inch closer to victory… If that sounds great, that’s DeathLoop, and it may be worthy of its triple-A price tag.

Not everything goes well into a column, but here’s some extra stuff:

DeathLoop has a very nifty multiplayer concept that involves two players. I don’t know how it plays, though, because the game just stayed on the matchmaking screen.

This game has a lot of tutorials at the start.

A Groundhog Day video game was released on VR in 2019!

How long was Bill Murray in that movie? Legend has it that a note in the script says 10,000 years. The director Harold Ramis once put it to around a decade, and some others have come up with roughly eight years. But let’s settle on WhatCulture’s maths, which tallies it to a digestible 33 years and 350 days.

I really hope Arkane will revisit the fantasy genre so that I can throw barrels at goblins again.

The DualSense aims to rectify many of the shortcomings of the DualShock 4, while introducing a few new features of its own along the way
News
1 year ago

Local tournament operator Mettlestate has announced the return of the Soccer Laduma series.
News
3 months ago

Choo choo! All aboard the Indie Express! Destination: Eastward

It’s a little disappointing that over the past few years there have been games that have had terrible releases, causing the whole “anti-pre-order ...
News
3 months ago

Despite being 6’4 and having a decent 3 point shot back in my high school, I never took on the sport of Basketball.
News
3 months ago