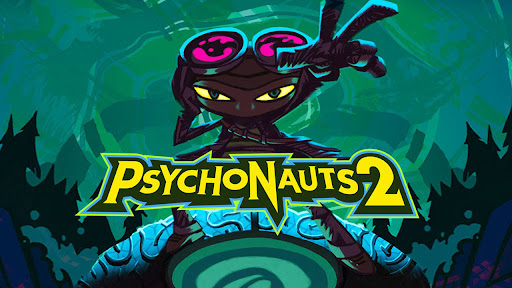 Psychonauts 2 is a platform game developed by Double Fine and published by Xbox Game Studios. The game was announced at The Game Awards 2015 ceremony, and released on August 25, 2021 for Microsoft.
Image: Supplied

Do you still remember the moment you first fell in love with gaming? Because I do. When I think back, I can vividly see myself lying on the floor of my parents living room, the carpet leaving its tell-tale dents in my skin. I can almost feel the buzz and static from my parent’s old bubble tv. Ever since the moment I received my first ever console, this was my favourite place to be. While I would never say that games were better “back in the day”, I will say there was just something about their simplicity that was so intriguing. Games back then didn’t try to be anything other than fun.

Don’t get me wrong; I enjoy a good competitive game of League of Legends or spending hours grinding for better gear in Elder Scrolls Online. However, at the end of the day, none of those games manages to reach into my heart and ignite my soul in the same way that the games of my childhood seemed to, which is where Psychonauts 2 comes into the mix and manages to take me straight back to lying on the floor in my parents living room, falling in love with gaming.

One of the single biggest compliments I can give a game is saying it was able to pull me in and keep me engaged all the way through without ever becoming “too much”. Throughout my many, many hours in Psychonauts 2, I never felt stressed or overwhelmed, regardless of what challenges the game had laid out for me. Thanks to the wonderful score, sound design and general ascetics of the game, there was this deep sense of calm that was always prevalent and allowed me to fully enjoy my time in the game from the moment I started it up until the end credits rolled, leaving me yearning for more. 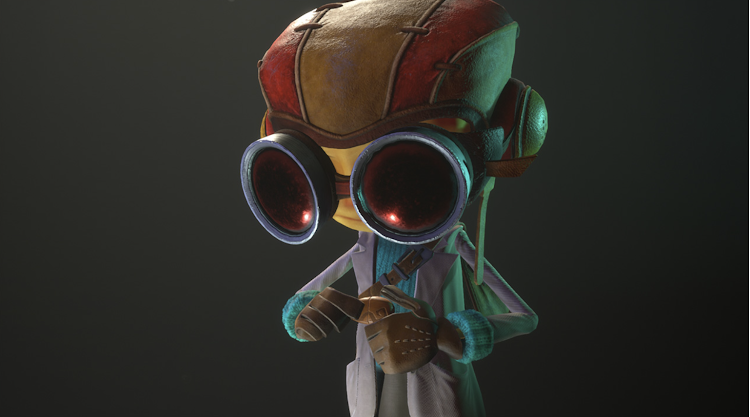 Psychonauts is a platformer that puts you in control of a young boy named Razputin, or Raz as he is more commonly known.
Image: Supplied

A testament to how Psychonauts 2, the sequel that was 16 years in the making, managed to pull me in became evident after I fell down the stairs and broke my elbow in two places. After one short trip to the doctor and one not so quick trip to the hospital, the first thing I did was start up Psychonauts 2 again to finish the game, broken arm and all. There is just something enchanting about the weird and wacky story and characters that I couldn’t get enough of, even when I was struggling to hold a controller.

For those reading who never got to experience the joy and, at times, pure frustration that was Psychonauts, let me quickly catch you up. Psychonauts is a platformer that puts you in control of a young boy named Razputin, or Raz as he is more commonly known. In a strange turn of events, Raz ends up running away FROM the circus to attend a summer camp for those with psychic abilities. While at this camp, Raz ends up uncovering a potentially deadly and sinister plot, and it’s up to him to stop it by diving into the minds of those around him and uncovering the secrets kept within. Psychonauts 2 takes place one day after the events of Rhombus of Ruin (a VR experience) that took place one day after the original Psychonauts game. 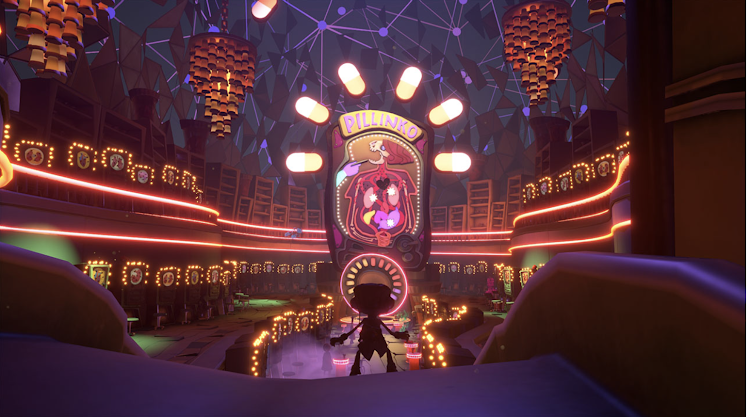 Psychonauts but as with the previous games, things quickly go awry.
Image: Supplied

Without spoiling any of the story: In Psychonauts 2, you once again take control of loveable Raz. The game starts at the Motherlobe (the Psychonaut headquarters), on Raz’s first day as a newly deputized Psychonaut. However, Raz soon discovers that he wasn’t actually deputized, and instead, he was made an intern. Your job in this game is to help Raz earn his stipes and his place as a full member of the Psychonauts but as with the previous games, things quickly go awry. The stakes are high, and this time they are also deeply personal.

One of the things that made Psychonauts 2 feel truly special is how lovingly Double Fine built on the first game instead of just throwing it out and starting afresh all these years later. Playing Psychonauts 2 feels new and fresh while also still loyal to the game beloved by many, for better or worse. One of my favourite new additions to the game was the introduction of a collectable pin system. While playing, you can collect the in-game currency, Psitanium, and then use that to purchase various pins that can be equipped to give Raz certain perks.

Some of these are pretty straightforward, allowing Raz’s abilities to do more damage etc., but there are some real gems hidden among them. For instance, a pin lets Raz start grooving to the music when you’re idle, and another that lets you use your abilities on the ambient animals you come across to pet them instead of causing harm. This somewhat small addition to the game did a great job of letting you, the player, feel in charge of creating the Raz that you wanted, and if that wasn’t one of my childhood wants and dreams, I don’t know what is. 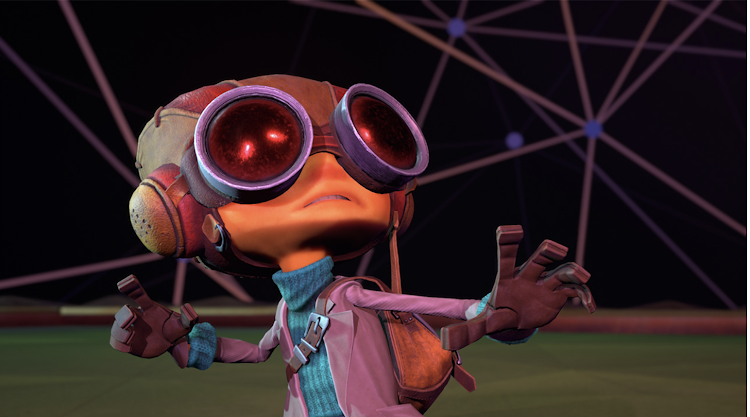 It’s hard to talk about Psychonauts 2 because, at the end of the day, it’s a game that shouldn’t be read about or watched, it should be played.
Image: Supplied

However, when talking about the worst parts of Psychonauts 2, we need to talk about the clunkiness, there were times when I would try to jump off of a pillar and land on a nearby rooftop only for Raz to DELIBERATELY (I’m sure) jump in the opposite direction as I wanted him to. Still, this slight “clunkiness” is also just something that comes with platformers. Even though it was irritating in the moment, the instances of this happening weren’t common enough to ever create any lasting frustration. My only other real complaint about Psychonauts 2 was how much time I would spend in an area trying everything I possibly could to reach a specific place or collectable only to give up and then minutes later get the ability which would allow me access. This didn’t happen once, not twice, not even three times – this happened constantly.

Each time I would swear that from this point on, I wouldn’t struggle. If I can’t reach something, I’ll trust that I’ll unlock an ability to help me. But no, struggle, I would. Now, with the retrospect of finishing the game, I would tell you never to spend too much time trying to get anywhere. When the game is done, you are given complete freedom to travel back through the game and complete / collect anything you may have missed the first time around. There are even a few little surprises for you along the way. It’s an enjoyable way of making sure you don’t miss out on anything and I wish I had known about it going in. Those are really my only complaints and considering I love moaning and spent over 30 hours in-game, it’s a feat to be proud of.

It’s hard to talk about Psychonauts 2 because, at the end of the day, it’s a game that shouldn’t be read about or watched, it should be played. If you’re still on the fence about it at the end of all of this word vomit, there is a character voiced by Jack Black, and it’s every bit as hilarious as you’d imagine.

BOTTOM LINE
While there is undoubtedly a lot to be said for the allure of nostalgia, what it ultimately comes down to is that Psychonauts 2 is just a great game - regardless of if you’re a returning player or discovering the series for the very first time.

CONS
Like the first game in the series, Psychonauts 2 is far from perfect, but these imperfections help create the magic the game offers and fixing anything would be taking away from the overall experience

I also hung out in the Age of Darkness Discord, to see how interested the devs were in the community’s feedback and overall, it seems positive.
News
1 month ago

WRC 10 makes no bones about the fact that Fanatec is the official wheel partner as you watch the loading Fanatec icon spin round and round and… well ...
News
1 month ago

DeathLoop is the exception to that rule until you realise that firepower and accuracy are the least demanding parts of the experience.
News
1 month ago

Choo choo! All aboard the Indie Express! Destination: Eastward

It’s a little disappointing that over the past few years there have been games that have had terrible releases, causing the whole “anti-pre-order ...
News
1 month ago